DP unrepentant about complaint against critic

DP unrepentant about complaint against critic 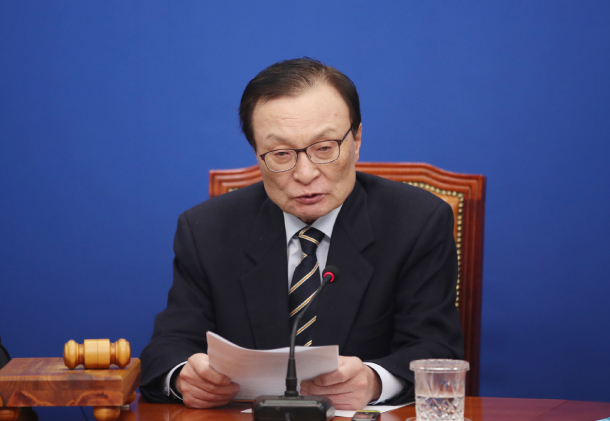 Lee Hae-chan, chairman of the ruling Democratic Party, makes his opening remarks at the Supreme Council meeting in the National Assembly in Yeouido, western Seoul, on Monday. [NEWS1]

The ruling party on Monday showed lukewarm remorse for its decision to file and later withdraw a criminal complaint against a critic over her newspaper column, as she demanded an official apology.

“The Democratic Party [DP] is a political party that had fought against authoritarian regimes in the past to promote freedom of expression and freedom of press,” said Rep. Nam In-soon, a member of the DP’s Supreme Council, during the leadership meeting in the morning. “The column by Professor Lim Mi-ri was heartbreaking. The DP will do better. We will work hard to communicate and empathize with the public, make the people’s livelihoods our top priority and build a fair and just [South] Korea.”

Nam was the first DP leader who addressed the latest public backlash over the party’s decision to take legal action against Lim, a professor at Korea University’s Center for Korean History, after she published a column critical of the ruling party.

Lim contributed a column to the Kyunghyang Shinmun on Jan. 29, urging the public to vote for parties other than the DP in the April general elections in order to hold it accountable for the current political tumult. On Feb. 5, the DP asked the prosecution to investigate Lim and two newspaper officials, saying the column had violated election laws. The complaint was signed by Chairman Lee Hae-chan.

After Lim made public the DP’s action against her, the ruling party faced fierce criticism, even from its liberal allies. The DP said Friday that it had withdrawn the complaint, admitting that its action had gone too far. It, however, offered no apology.

“I demand that the DP must apologize to me and the people for having undermined the freedom of expression,” Lim said Sunday.

In a text message to reporters, Lim said the DP leadership should have apologized but failed. “Furthermore, some of the DP supporters have filed a complaint to the National Election Commission to investigate me,” she said. “It is an attempt [to make me an example] and gag other critics.”

“I want to stress again that it is irresponsible for the ruling party to talk down on my argument by citing my career,” she said. “That is a de facto declaration that they will turn a deaf ear to the public criticism.”

When the DP announced that it had recanted the criminal complaint, it tried to tie Lim to Ahn Cheol-soo, a former presidential contender who is prompting an anti-Moon political alliance ahead of the April general elections.

While Nam addressed the issue at the leadership meeting on Monday, other DP leaders remained tight-lipped. Conspicuously silent was Chairman Lee, who had signed the criminal complaint.

“I apologize to the people that we have lost our humility or have given the impression of being arrogant,” Lee said when he met with reporters. “I will be more cautious from now on. I expect the party to be more careful, too.”

Lee said he was offering his personal apology to the people, adding that he is a person nominated as a co-chair of the DP’s election campaign committee.

Lee, however, did not offer an apology to Lim. He also said the party has to make a decision about Lim’s demand that the DP leadership issues a formal apology to her.

Rep. Hong Ihk-pyo, chief spokesman of the DP who had led the criminal complaint against Lim, refused to address the situation on Monday. Asked about the party’s official position about Lim’s demand for an apology, Hong said, “I will talk about it later.”

Later in the afternoon, Lim sent a text message to reporters and said she will accept Lee’s apology and Nam’s remarks, although it is regretful that the DP did not issue an official apology.