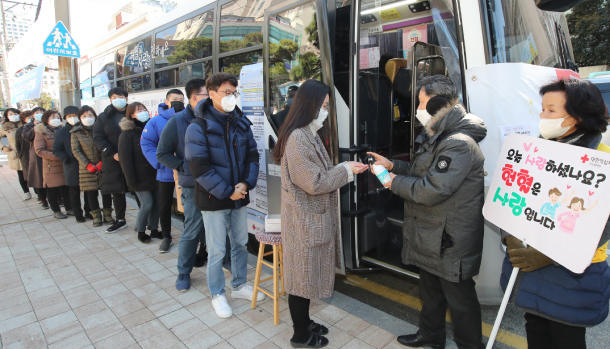 Civil servants of Haeundae District Office in Busan wait in a line to donate their blood on Tuesday as blood banks suffer from a severe shortage. People are refraining from going to donate due to concerns about the coronavirus. [SONG BONG-GEUN]

Korean blood banks are suffering from a severe shortage as more people are refraining from making donations amid concerns about the coronavirus.

According to the Korean Red Cross Blood Services on Monday, a total of 273 organizations have canceled their plans to donate blood since Jan. 21, a day after Korea’s first confirmed patient of the new coronavirus was announced, while some 13,900 individuals backtracked on their plans to donate.

The number of individual donors between Jan. 21 and yesterday was about 174,471, a considerable drop from the same period last year when the figure stood at 196,177.

As of Monday afternoon, Korea had a four-and-a-half-days’ supply of blood, lower than the standard reserve of five days. When supplies fall under three-days’ worth, the Korean Red Cross announces an “emergency blood shortage.”

As people’s reluctance to donate blood grows after the outbreak of the novel coronavirus, an increase is expected in directed donations, whereby patients get the opportunity to choose their donors.

“Since the hospital has an insufficient amount of blood, we’ve been telling our patients to search for donors on their own,” an official from the Gyeonggi branch of the Korean Red Cross in Suwon, Gyeonggi, said. “Our hospital looks very crowded these days, but it’s because patients come with their own donors.”

In a bid to solve the issue, the national government has been exerting efforts to raise awareness about the situation.

“Korea may have to worry about the possibility of the current blood shortage immediately turning into a national crisis,” an official from Gyeonggi branch of the Korean Red Cross said. “The local governments should come up with countermeasures as soon as possible by organizing councils that can encourage the public’s participation.”

“Korea is currently suffering from blood shortages as the number of blood donations have plunged due to the novel coronavirus,” the statement read. “We appeal to all public to participate in blood donations more actively.”