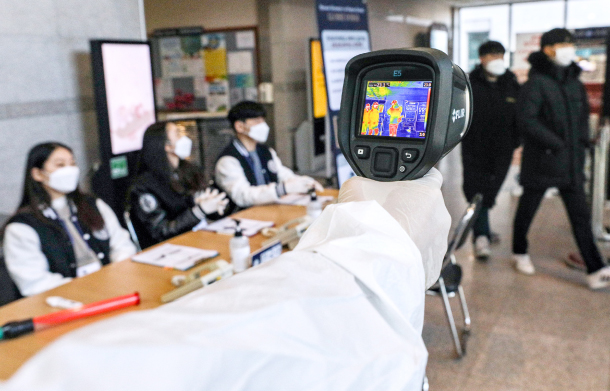 A worker checks the temperatures of visitors with a portable thermal imaging camera at a makeshift dispensary for the new coronavirus infection set up at the dormitory of Hankuk University of Foreign Studies in Dongdaemun District, eastern Seoul, on Tuesday. Korean universities are scrambling to find ways to quarantine Chinese students who are returning for the spring semester. [NEWS1]

Korea confirmed Tuesday that another person, a 61-year-old Korean woman from Daegu, contracted the coronavirus through an unknown route, becoming Patient No. 31 - and possibly signaling a new and more dangerous phase of the outbreak.

Like Patients No. 29 and 30, an elderly couple from Seoul who tested positive back-to-back Sunday, No. 31 had not traveled abroad recently nor had contact with known patients. They are technically Korea’s only three patients to have become infected through unknown routes, although presumably one member of the married couple infected the other.

Patient No. 31 is also the first coronavirus case in the southeastern Gyeongsang region, and health authorities are preparing for the possible spread to that part of the country.

The Korea Centers for Disease Control and Prevention (KCDC) said that Patient No. 31, a resident of Daegu’s Seo District, visited a public health center in Suseong District Monday afternoon around 3:30 p.m. because she had a fever and pneumonia-like symptoms and later tested positive for the virus, officially called Covid-19. She was transferred to Daegu Medical Center, a state-designated hospital to treat the coronavirus, and is currently in isolation.

“We are entering a new phase of the Covid-19 outbreak, taking into consideration the situation domestically and abroad,” said Jung Eun-kyeong, director of the KDCD, in a briefing Tuesday afternoon.

Referencing the latest three patients, Jung said, “There are chances that similar cases will be reported, which is why we say that this could be a ‘new phase.’” 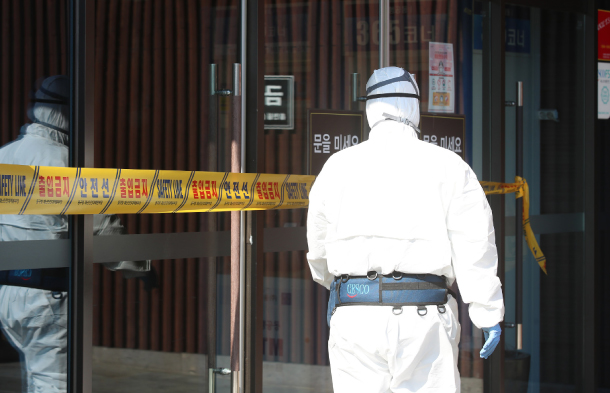 A quarantine worker disinfects the entrance of the Queenvell Hotel in Daegu on Tuesday after it was found that Patient No. 31 visited it. [NEWS1]

The Korean government has been able to link all known cases of the coronavirus in the country to China, other affected areas overseas or contact with infected people domestically.

Most coronavirus cases so far occurred in Seoul and Gyeonggi, although Patient No. 16, a 42-year-old woman who visited Thailand, is from Gwangju and her brother, No. 22, is from Naju, South Jeolla.

The latest case is causing worries because Patient No. 31 in the past two weeks went to work, used public transportation, attended church service, dined at a hotel buffet and even spent days in the hospital, raising the chances of secondary and tertiary infections.

Patient No. 31 was involved in a car accident late Feb. 6 after work, according to the Daegu Metropolitan City. She was hospitalized on Feb. 7 for the next 10 days at Saeronan Oriental Medical Hospital in Suseong District, Daegu - though that did not stop her from leaving the hospital because her injuries were minor.

She developed a sore throat on Feb. 8 and a fever around Feb. 10 but tested negative for the flu. She attended a church service in Nam District on Feb. 9. Last Friday, she finally began receiving antibiotics for pneumonia.

On Saturday, she had lunch with an acquaintance at a buffet restaurant at the Queenvell Hotel in Dong District. She again attended a two-hour church service on Sunday.

Her pneumonia-like symptoms worsened over the weekend. Finally on Monday, she voluntarily visited the public health center to be tested for the virus and was confirmed positive Tuesday. She is in relatively stable condition.

Health authorities are tracking her exact route in the past two weeks and decontaminating and temporarily shutting down places she visited.

There were 33 patients at Saeronan Oriental Medical Hospital, and access to the facility has been shut off. Hundreds of people attended the Sunday church services, and the hotel buffet can serve over a thousand people when there are wedding receptions. She also rode in taxis at least five times in the past two weeks.

Her husband and two children are under self-quarantine.

Patient No. 31 visited the headquarters of her office located in Yeoksam-dong, Gangnam District in southern Seoul, on Jan. 29, according to Daegu officials but has not left Daegu since.

Patient No. 17, a 38-year-old man who contracted the disease in Singapore, stopped in Daegu during the Lunar New Year holidays at the end of last month.

There has been no confirmed contact between No. 31 and No. 17 thus far. Patient No. 30, the 68-year-old wife of 82-year-old Patient No. 29, residents of Jongno District in central Seoul, also got around before her diagnosis on Sunday. Over the past two weeks she used public transport to go to work in Jung District, visited multiple hospitals and dropped by Starbucks.

As of Tuesday, the KCDC said that a total of 12 out of 31 coronavirus patients have fully recovered and been released.

Patients No. 12, a 48-year-old Chinese man who visited Osaka in Japan, and No. 14, his 40-year-old wife, tested negative for the virus twice before their release.