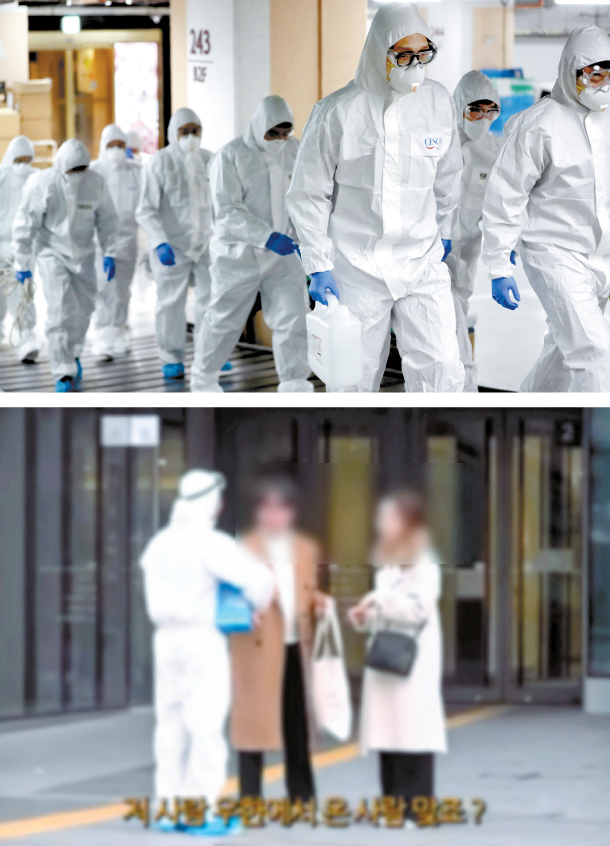 Top: Staff in disinfection suits march into Lotte Department Store’s flagship location in Myeong-dong in central Seoul. The store closed temporarily on Feb 7. Above: A screen capture of a prank video on YouTube related to the coronavirus. [SCREEN CAPTURE, YONHAP]

As the tally of Koreans sickened by the new coronavirus continues to grow, so have the deceptive tricks used by others to take advantage of the crisis.

From mask hoarders to YouTube personalities faking sickness to get views, the Joongang Ilbo organized a series of incidents that show how individuals have used the public’s fear of the coronavirus to their advantage.

On Monday, a 40-year-old man was arrested by police for allegedly throwing a punch at a club employee in Gangnam District, southern Seoul. The man tried to flee, saying he recently came back from abroad and tested positive for the coronavirus.

This was a lie, according to a paramedic who arrived at the scene to check the man’s temperature. The man did not show any signs of fever and had no records of visiting a foreign country.

This was not the first time the man had pretended to be sick, police said. The day before his arrest, the man allegedly filed a false police report claiming to have symptoms related to the virus, for which he later tested negative. Police officials suspect he was drunk at the time and say they are considering filing additional charges for obstructing the duty of firefighters.

A group of four YouTubers in Daegu were arrested Jan. 2, for allegedly filming a prank video and tricking people on the streets. Around noon that day, they re-enacted what appeared to be a scene from a disaster movie, with two people in disinfection suits chasing the other two in front of Dongdaegu Station for two hours, according to police reports. They filmed the reactions of bystanders at the scene and uploaded it to their YouTube channel.

The video spread quickly online, fueling rumors that the Daegu City Hall was running a mock drill in preparation of the coronavirus outbreak. In response, Daegu’s regional government officials issued a statement on social media confirming the rumors were false.

The pranksters, four men in their 20s, were indicted Monday for a misdemeanor.

Two women were charged last Thursday by police for obstructing business. The pair made claims online that patients confirmed with the virus visited certain hospitals when they had not.

The 30-year-old woman uploaded a post to an online community for moms on Jan. 29, claiming that a patient was quarantined after visiting a certain hospital in Incheon, mentioning the exact name and location of the hospital. The other woman, in her 40s, uploaded the same post that day in a different online community for Gimpo, Gyeonggi, residents.

The posts were later proven to be false, after the hospital reported the posts to police on Feb. 1. Hospital officials submitted a screenshot as evidence against accusations that the two women obstructed their business. The hospital official said they received concerned calls from people who had seen the post online.

The two women testified to police that they only wanted to share information each saw in a different online community and warn the public, but police said they found that no details of the hospital were present in the original post.

The Ministry of Food and Drug Safety cracked down on a company in Gwangju last Thursday for hoarding more than four million masks. The masks are worth around 7.3 billion won ($613 million), according to the ministry. The company allegedly began hoarding masks soon after China confirmed the first case of the coronavirus, from Dec. 12 through the end of January. The stockpiled masks amount to about 41 percent of the Korea’s daily production. The ministry says it plans to charge the company for violating the price stability law.

Mask hoarders have also become a target for the National Tax Service (NTS). The NTS launched a tax investigation into an individual who hoarded more than 2 million masks. The individual is suspected of tax evasion and using a loan account to buy masks.

What caught the eyes of community users was the official slogan of the Seo District government in Gwangju imprinted on the masks, which read “Seo District at the center of people.” Online users discovered that the masks were leftovers from last year, originally handed out by the government to low-income families to provide protection from fine dust.

The masks allegedly sold out, despite a large number of critical replies to the original post.

“We asked the website organizer to take it down. However, we will not take any legal actions against the seller,” an official from the Seo District government office said.

Reselling masks can be a tricky issue for prosecutors, since it is hard to determine whether reselling face masks received by the government is considered as a normal way of disposing one’s own property or deceiving government officials. Currently, there are no investigations related to mask reselling underway.