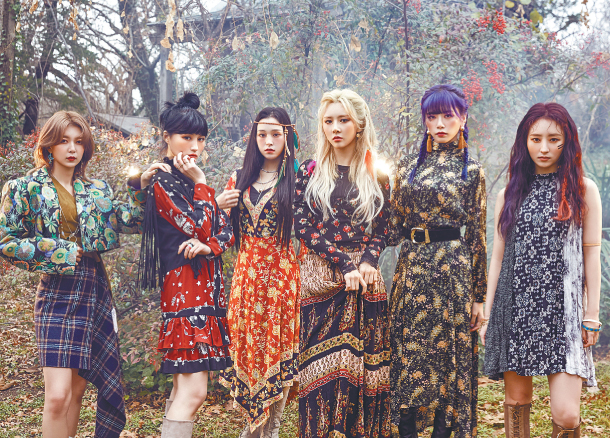 Dreamcatcher members, from left, Dami, Siyeon, Gahyeon, Yoohyeon, JiU and SuA. Handong will not be taking part in promotions for the group’s latest release due to work she has in China. [DREAMCATCHER COMPANY]

Having wrapped its three-year “Nightmare” series, girl group Dreamcatcher is opening up a new chapter, this time titled “Dystopia.”

The seven-member group released its new album “Dystopia: Tree of Language” on Tuesday, as not only its first full-length release but also the start of a new storyline for the seven girls. The group is keeping to its unique concept and metal-based rock sounds, but this time with a trendier touch to allow for a wider range of listeners to enjoy its music.

The group sat for an interview with the Korea JoongAng Daily at music start-up MyMusicTaste in southern Seoul on Monday prior to the album’s release. One member, Handong, was absent due to a scheduled appearance in China.

“Dreamcatcher’s known for our rock sound,” said SuA. “But this time, we mixed a bit of electronica and made the beat a little tighter. It’s trendier, and I think it will be easier for the general public to listen to.”

Since Dreamcatcher debuted in 2017 with “Chase Me,” the band has been rocking a dark metal sound that was seldom heard in K-pop, especially for girl groups. In fact, five members of Dreamcatcher - Dami, Yoohyeon, JiU, Siyeon and SuA - debuted in 2014 as Minx but failed to capture people’s attention with its bright and bubbly concept that was already quite abundant in the industry. Adding Gahyeon and Handong to the group and trying out a darker, rock-friendly sound, Dreamcatcher found its sweet spot.

“We definitely haven’t let go of our rock sounds,” said SuA. “But we have added other things to rock, like trying on new clothes. And I think that makes the songs a good listen for people who like different genres. Honestly, there’s not one song to miss on our album. From beginning to end, they’re all amazing.” 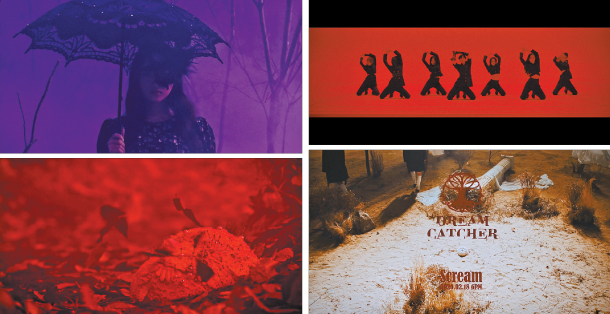 For Dreamcatcher’s latest release, “Dystopia: Tree of Language,” the girls take on the identity of tree nymphs who protect the tree of language, which grows fruit according to the words it hears from the outside world. Dreamcatcher has been popular among fans for its unique storyline that it has kept to since its debut, with a dark and powerful touch unique for a K-pop girl group. [DREAMCATCHER COMPANY]

Apart from the cool new story and sound, the 13-track album also includes many contributions from the group. Dami wrote all of the rap parts for herself and SuA choreographed one of the songs for the group.

“We’ve always just been on stage by ourselves,” said Siyeon. “But for the first time, we’re going to have dancers with us. The songs are going to have the most powerful beats yet. I think it will be enough to satisfy the fans who have been waiting for us […] We’re like a buffet that fans can choose from.”

Another backbone that has held the group together is its unique story. With “Nightmare,” the members took on the roles of seven fairies who keep you safe from nightmares. But don’t picture Tinker Bell - these fairies are almost as powerful and dark as the nightmares themselves.

This time, with “Dystopia,” they’re here to protect you not from your bad dreams, but from the outside world and the things that can hurt you in real life. “Dystopia” will be a three-part project, which will touch on the things that make our world a dystopia, in hopes of turning it into a utopia.

“In this new storyline, there’s a tree that grows delicious white fruits when it hears good things and grows black fruits when it hears bad things. So in a world that’s been plagued by dark, hurtful language, we are the nymphs of the tree who protect it. It’s a fictional story, but there are factors here and there that will make you think that the things are happening in real life,” said JiU.

“All our songs are related in some way, and it adds more fun to listen to the songs thinking about that,” SuA said.

Just like the tree, the group is also affected by the language it hears, regardless of its efforts to not listen to hateful messages that bring it down. Although the “bad language” metaphor wasn’t a direct shot at hateful online trolls, it did resonate with the group.

“I tell myself not to care about the negative comments, but they come back at a certain point and linger in your head,” Yoohyeon said. SuA agreed, saying that she was stressed by hurtful words even if she tried not to be. But Siyeon, the most charismatic member of the group, joked, “I really don’t care. I just think, ‘Oh is that right?’ That’s it.”

Last year, the group went on a world tour and performed for its fans, who go by the name InSomnia in Asia, Australia, Europe and North America. Each of the venues it performed at held over a thousand eager and passionate fans.

“I feel us growing more and more with each tour. I feel more confident with what I can do to make fans happy,” said JiU.

Gahyeon added, “It’s brought the members closer together as well. There’s no time for us to go outside, so we’re stuck with each other all day.”

Three years have passed for Dreamcatcher, and the group’s goals have changed over time. If in the past, the members were all about becoming famous and becoming big-time stars, these days, they would just like to do what they can for the people who love them.

“In the past it was all about me,” JiU said. “But now, I look at everyone around us - the staff, the family and everyone. If in the past, I wanted to be successful for myself, now I want to be successful for the people around me. I want to make it so that I can pay them back. I don’t want to care about becoming No. 1 anymore. I want to be someone who can pay people back, a singer who can pay people back.”

“I really love it when people say, ‘Thank you for singing.’ I thank them more for listening, but hearing that makes me feel so fulfilled,” said Siyeon.