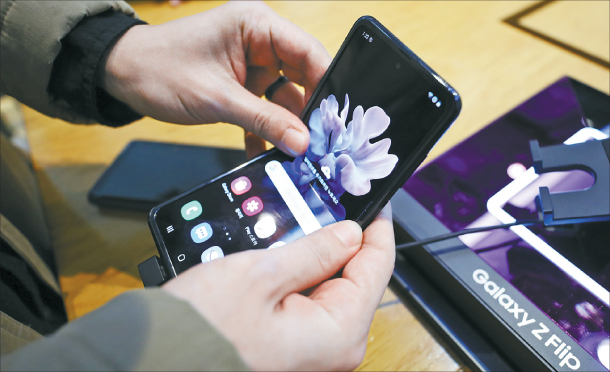 Samsung Display became the first in its industry to commercialize ultrathin glass (UTG) for foldable displays, the company announced Wednesday.

The Samsung Electronics affiliate said the UTG cover, about 30 micrometers thick, can now be mass-produced for other foldable devices. The UTG cover is more durable and scratch-resistant than plastic layers, the company said.

The material passed the test from Bureau Veritas, the international certification agency in France, after proving its ability to withstand more than 200,000 folds.

Samsung Display said it has worked with local glass substrate companies since 2013 to make the UTG cover. Much of the collaboration was dedicated to ensuring uniform toughness for the cover with injection of special materials inside the glass cover, the company said.

The product is already used in Samsung Electronics’ vertically foldable Galaxy Z Flip smartphone, which launched last week. It could also be applied for other foldable electronic devices when demand arises.

The much-anticipated second foldable smartphone from Samsung Electronics officially launched last week at an event held in San Francisco. The stocks of the new gadget quickly depleted on the first day of the product’s release.

Samsung Electronics said that the UTG cover made the Z Flip more resistant to scratches than the Galaxy Fold, which was delayed for several months after reviewers found that the phone’s screen easily broke.

“With our existing polyimide cover window, development of the new extremely flexible UTG cover window ‘Samsung UTG’ now enables us to meet more demanding customer needs,” Choi Soon-ho, a vice president at Samsung Display, said in a statement. “Clearly, Samsung UTG is a highly enticing manufacturing alternative which serves as another important example of our dedication to technology advancement and manufacturing excellence.”

The company filed trademark protections for the new material in 38 countries, including the United States, China and some European Union member states. It is also planning to trademark its already-developed polyimide cover window.