‘Parasite’ team reflects on an unforgettable year: After months of hard work, cast and crew are ready to move on

‘Parasite’ team reflects on an unforgettable year: After months of hard work, cast and crew are ready to move on 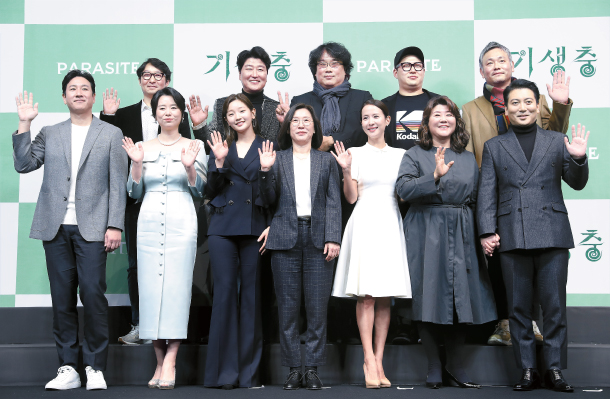 Winning over one hundred awards from international film festivals and prestigious film associations around the world was a history-making feat for director Bong Joon-ho and his genre-bending film “Parasite.” But when the director, the cast and the rest of the “Parasite” team stood on stage after the movie was named Best Picture at the Academy Awards on Feb. 9, not only the American audience, but everyone back home in Korea swelled with pride as they witnessed a moment that will be forever seared in local history.

After returning to Korea, Bong and the cast met with local press on Wednesday to provide a behind-the-scenes look at their Oscar campaign and share what it was like to attend the ceremony.

The press conference was held at the Westin Chosun Hotel in central Seoul, which coincidentally was the same place the cast held a press conference in April 2019, prior to the film’s premiere at the Cannes Film Festival the following month.

“It feels so weird to be back here again after traveling around the world,” the director said.

After receiving the Palme d’Or, the Cannes Film Festival’s highest honor, in May, the director spent the summer in Korea before heading out to the United States to kick off the film’s Oscars campaign, which began in August and continued for six months straight.

Song Kang-ho and Bong spent the most time traveling from event to event promoting the film, but the director admitted that at first he found the Oscar campaign a little strange, as it was a totally new concept for him and the rest of the local film industry, since the chances for a local film to even be nominated for an Academy Award had been very slim for the last 58 years.

“Our American film distribution company, Neon, is an independent company, far smaller in scale to big studios like Netflix,” Bong said. “Since we lacked the budget [that the big companies had,] we went for volume. Song and I must have given about 600 interviews at various film events, and some nights we would get nosebleeds [from the sheer exhaustion].”

The director admitted that he had been feeling burnt out ever since filming “Okja” (2017), but he was so eager to push forward with “Parasite,” and he immediately started to work on the now-acclaimed film without hesitation.

“As I persisted on this journey, I came to realize that this campaign is more of an inspection process where people are able to probe deeper into the story, to satisfy their curiosity about the film. That five- to six-month journey is an Oscar tradition [that pays respect to the films] before the big finale at the ceremony.”

In the midst of the campaign, one of the director’s comments provided a wake-up call for the American film industry when Bong classified the Oscars as a “local” event. Korean press speculated that Bong’s words were intentional, a part of his “plan” to stimulate the Academy members.

But the director refuted the matter.

“I was just discussing the different personalities of film events and was comparing [Oscars] to international film festivals like Venice and Cannes, and the word just naturally slipped out,” Bong said. “I think it resonated with the American public because many young people tweeted about my comment.”

At the press conference, Bong revealed that famed Hollywood director Martin Scorsese, who Bong has long looked up to, had personally sent him a letter.

“I just read the letter a few hours ago, and since it was addressed to me personally I won’t be sharing what [Scorsese] wrote,” he said. “But in the last line, Scorsese congratulated me and told me to take a break, but not to take too long because he, too, like rest of the world, is awaiting my next film.”

Along with his budding friendship with one of Hollywood’s greatest directors, another unexpected product of the film’s Oscar campaign was the recently-announced “Parasite” adaptation into a HBO drama series.

“I’ll be participating as the producer of the series, and I’ve already met with [executive producer] Adam McKay] to talk about the series,” Bong said. “The basic message of the story will be the same: to spotlight the wealth inequalities between social classes. But the black comedy and thriller aspects of the film are going to be a tad heavier and more dense.”

But despite press reports that Hollywood stars Tilda Swinton and Mark Ruffalo would be appearing in the upcoming series, Bong insisted that the project was “still in the beginning stages” and that casting decisions were nowhere near final.

“The TV drama version of ‘Snowpiercer’ is coming this May, but that project began around 2014 to 2015,” Bong continued. “I believe the HBO version of ‘Parasite’ is going to take just as long. What I can tell you now is that HBO, McKay and I are taking our first steps to dive into the TV show, and it’s all looking good.”

The press was eager to see the Oscar awards in person, but the “Parasite” team did not bring them along, instead opting to keep them safe. According to Kwak Sin-ae, the producer of the film and CEO of the film’s producer Barunson E&A, two of the trophies - Best Picture and Best International Feature Film - are being kept in her office.

“The trophies are really heavy, so Bong gave me the [Best International Feature Film] award to keep,” Kwak said. “The trophies each have the respective winner’s name written across it, so each winner took the trophies that had their names written on it home.”

The other two trophies, Best Director and Best Original Screenplay, are currently in possession of Bong and screenwriter Han Jin-won.

“There’s no particular significant reason behind the making [of the black-and-white film],” Bong said. “I’ve made one before, for ‘Mother’ (2009), but I just have this yearning about old classic films. It’s just my cinematic curiosity peeking in to imagine how I would have made a film if I was a director living in the 1930s.”

Although the director wanted the public to experience the latest version for themselves, he did reveal one person’s comment about the film after it was screened at the Rotterdam festival.

“One person said that ‘I think the scenes smell even more in the black-and white vision,’ I didn’t understand it at first, but more I think about it, I think in [black-and-white] the audience will be able to appreciate and feel the detailed expressions and performances of the actors, perhaps due to the lack of color. You can feel the actors’ gaze more vividly through the screen. I think it’s going to be another fun project.”

Although director Bong has the HBO series to deal with, he and the rest of the cast said that they are ready to say goodbye to the film.

“It’s so surreal to also be in the spotlight because a movie’s crew are usually behind the scenes,” production designer Lee Ha-jun admitted. Besides being nominated in the Production Design category at the Oscars, Lee received awards from many organizations in the past year, including the Art Directors Guild (ADG). Film editor Yang Jin-mo, amongst numerous awards, received the Eddie Award at the ACE Eddie Awards last month.

“When I received the ADG award, I felt that it was given to me as fuel to propel me forward. I’m now ready to go back to my original position and resume my work [on other films],” Lee said.

“From last May at Cannes to the Oscars, I understand that all of these miraculous events will be remembered as historical moments,” Bong said at the end of the press conference.

“But I also hope that ‘Parasite’ will be remembered for the film itself. Although winning the Oscars was wonderful, I was more overjoyed to see how the global audience responded to the film’s story and message. That was possible due to the superb ensemble of every member on and behind the cameras - the actors, camera teams, and all the staff members’ hard effort - for every scene of the movie. So I hope that ‘Parasite’ will be remembered for what it originally is - a good film.”