Korea bars foreigners who were on the cruise

Korea bars foreigners who were on the cruise 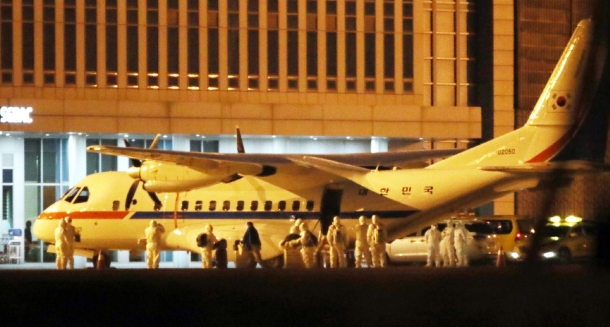 The Korean government on Wednesday said it would bar all foreigners who were on board a coronavirus-ridden cruise ship docked in Yokohama, Japan, from entering the country to prevent a breach in its quarantine efforts.

The announcement was made as the Japanese government ended a weeks-long quarantine of thousands of passengers on the ship, the Diamond Princess. All passengers and crew on the ship are set to disembark gradually until Friday.

A total of 545 people who were aboard the ship were infected with the coronavirus so far, including 88 new cases reported Tuesday. The vessel was carrying 3,711 passengers and crew when it was first placed under quarantine by the Japanese government on Feb. 4, 14 of whom were Korean nationals.

Earlier on Wednesday, a military plane carrying seven people - six Koreans and one of their Japanese spouses - evacuated from the ship a day earlier arrived at Gimpo International Airport.

None of the evacuated passengers showed immediate symptoms of the coronavirus.

Upon arrival at around 6:27 a.m. aboard the Korean Air Force’s VCN-235 plane, which is designated for presidential use, the evacuees were transferred to a government-designated medical facility at Incheon International Airport where they will be quarantined for two weeks.

The incubation period for the novel coronavirus, which the World Health Organization has termed Covid-19, is 14 days.

This marks the fourth successful evacuation operation carried out by the Korean government related to the coronavirus outbreak, following the repatriation of 848 Korean nationals and their Chinese family members from Wuhan and other nearby areas in Hubei Province through three charter flights in earlier weeks.

The VCN-235 plane was dispatched from Seoul at around noon on Tuesday after the Korean government resolved to evacuate four of the 14 Korean nationals aboard the Diamond Princess upon their request. Two other Koreans requested evacuation later on Tuesday and were repatriated with the group.

Each of the passengers was placed in single-occupancy room where they will be tested regularly.

In a press briefing, Seoul’s central disaster headquarters said the government would ask Tokyo to provide a list of all passengers who were aboard the Diamond Princess in order to block their entry into Korea.

“If any Korean nationals [who were aboard the ship] return to Korea, they will be subject to a medical test and quarantined in their respective homes,” said a Health Ministry official.

Tokyo’s decision to keep thousands of passengers aboard the Diamond Princess since early this month generated immense global controversy, with experts noting the ship was a “petri dish” for the virus.

Some passengers noted that the quarantine aboard the ship was not airtight as there were regular interactions with crew members delivering food and other necessities.

The Japanese government, fearing the virus’s impact on the Summer Olympics due to be held in Tokyo in July, issued new health guidelines last week after a spike in cases unrelated to the Diamond Princess, putting the number of non-cruise ship infections at 68. One elderly woman in her 80s died last week, the first fatality from the virus in Japan.

Yet Japan’s Health Ministry said no additional quarantine measures will be enforced on passengers disembarking the Diamond Princess after receiving health tests.