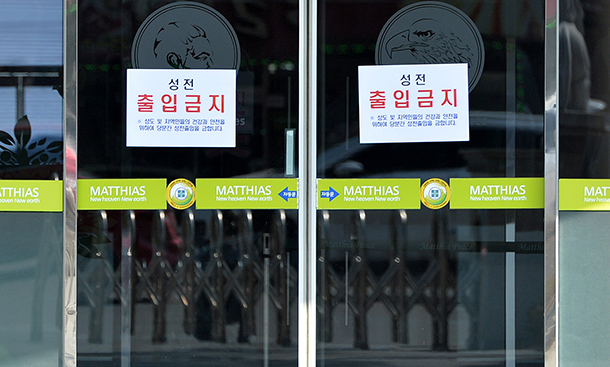 The church, whose 10 followers were confirmed as infected with the novel coronavirus, was shut down on Wednesday. Patient No. 31 was found to have attended services at the church while she developed symptoms. [KIM SEONG-TAE]

Fifteen people were confirmed infected with the new coronavirus in Korea Wednesday, 10 traced to a church in Daegu visited by Patient No. 31.

It was the first time health officials reported a double-digit increase in the number of infections in a single day.

A total of 46 people have contracted the disease so far in Korea, although 12 have been discharged from hospitals after full recoveries.

Four additional patients are expected to be discharged today.

Among the 15 new patients, 10 live in Daegu and three in North Gyeongsang.

Seven of the patients from Daegu and the three from North Gyeongsang appear to have contracted the virus in a Shincheonji church, a controversial religious organization, in Daegu, where Patient No. 31 went before being diagnosed Tuesday.

Health officials said it was unclear whether Patient No. 31, a 61-year-old Korean woman living in Daegu, infected the 10 people.

It’s possible she may have contracted the disease from one of them, or another churchgoer who has yet been identified.

The other three victims in Daegu may be linked to the other Daegu patients.

In Suwon, Gyeonggi, a 10-year-old girl appears to have contracted the disease from her mother, Patient No. 20, which is the first time in Korea that a minor caught the virus.

In Seongdong District, eastern Seoul, a 78-year-old man who didn’t travel abroad and appears not to have contacted any previously confirmed patient contracted the disease.

He is the fourth case in Korea in which health officials don’t know how the patient got infected.