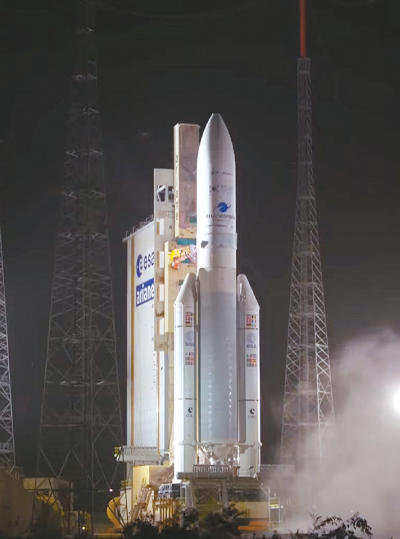 Korea successfully launched Wednesday the Chollian-2B, the world’s first geostationary environment-monitoring satellite, which is anticipated to provide data helpful toward combatting high levels of fine dust in the region and coping with maritime disasters.

The Ariane 5 rocket carrying the 3.4-ton satellite, tasked with tracking air pollutants and the marine environment, lifted off from the Guiana Space Centre in French Guiana in the northeastern coast of South America at 7:18 p.m. on Tuesday, local time, according to the state-run Korea Aerospace Research Institute (KARI).

The Chollian-2B separated from the rocket 31 minutes after liftoff at an altitude of 1,630 kilometers (1,013 miles) and six minutes later made its first contact with a ground-tracking station in Yatharagga, Australia.

It was on course to reach its final geostationary orbit of 36,000 kilometers above the equator in about two weeks’ time.

The indigenously built multipurpose satellite can monitor in real time the movement of fine dust and other air pollutants, as well as marine environment issues such as harmful algae blooms. It will be fully operational by 2021.

Equipped with the Geostationary Environmental Monitoring Spectrometer (GEMS), it will observe and track 20 types of air pollutants, including nitrogen dioxide, sulfur dioxide, formaldehyde and climate change-inducing ozone, in the Korean Peninsula and East Asian region.

KARI says that the GEMS, an ultra-precision optical observation system, is at least two years ahead of similar sensors that are being developed in the United States and Europe and will be able to cover a region of around 5,000 square kilometers (1,931 square miles) eight times a day.

The satellite will trace the migration paths of fine dust for analysis of the impact of overseas dust on the domestic atmospheric environment of Korea, according to KARI, and identify areas that generate the highest levels of fine dust in the country, providing data that can back policies to improve air quality.

It is anticipated that continuous monitoring and analysis of atmospheric pollutants and fine dust migration trends in East Asia can serve as reference data in the case of any international disputes regarding the atmospheric environment.

The Chollian-2B is also equipped with the cutting-edge Geostationary Ocean Color Imager II, or GOCI-II, which can monitor in real time the migration of red and green tides and maritime disasters such as oil spills in oceans around the Korean Peninsula.

It is expected to bolster maritime safety by observing currents and sea fogs and glaciers and contribute to the protection of the marine environment by monitoring the dumping of pollutants into the ocean.

The Chollian-2B was built by a consortium led by KARI starting 2011, and the project cost 386.7 billion won ($325 million). It is an upgraded version of the Chollian-2A satellite launched in December 2018.

During its initial operation, the Chollian-2B will be making contact with four satellite stations including the Western Australia Space Center in Yatharagga, as well as ones in Fucino in Italy, Santiago in Chile and South Point in Hawaii.

After undergoing orbit tests, it will provide marine information services from October 2020 and atmospheric environment information in 2021.

KARI expects that people will be able to check carbon emissions and the concentration of long-distance migrating air pollutants in East Asia, including Korea, through their smartphones starting 2021.

The life cycle of the satellite is estimated at 10 years.