Kiwoom Heroes’ rookie Park Ju-hong hasn’t made his official KBO debut yet, but he is already making headlines.

While all the other KBO clubs used their first picks at the 2020 KBO Rookie draft for pitchers, the Heroes were the only club to have drafted a fielder. Park was already well-known to the scouts from his high school years playing as a slugger. However, the decision was a surprising one as the Heroes already had great depth in their outfield. 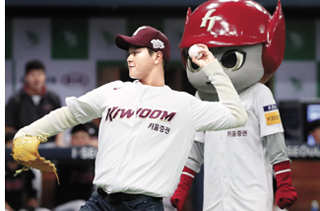 Kiwoom Heroes’ rookie Park Ju-hong hopes to get added onto the starting entry and play in as many games as possible for the 2020 season. [YONHAP]

This was good enough for Park to catch the attention of the scouts, as there were no other competitors in his class in terms of his slugging percentage. But that wasn’t all. He was also evaluated to have a smooth swing and power, good enough to be considered as the best in Seoul.

With expectations set high, the Heroes’ newly appointed manager Son Hyuk added Park to the club’s 36-man spring training list. Of the 36, Park was the only rookie to get added. He is one of five outfielders, along with Lee Jung-hoo and Kim Kyu-min, and is currently training in Kaoshiung City, Taiwan, with the rest of the Heroes roster, getting ready for his first season in the KBO.

Below are edited excerpts of Park’s interview with Ilgan Sports.

Q. How does it feel to get included in the spring training for the first time as a rookie?

A. I’m having more fun and enjoying it more than when I was a student. Since I’m with great senior players, I’m learning a lot too. It’s great because I get to see how the senior players are spending their time at spring training, ahead of the season, and experience the same thing right next to them.

How did you feel when you first heard that you had been added to the Heroes’ spring training list?

I just thought that our manager gave me a chance. So I told myself to work hard and play well at spring training. I did feel some pressure, but I felt more of a responsibility to do well.

What has been the biggest difference from your high school team to a professional team in the KBO?

The biggest difference is training. Unlike when I was an amateur, I know my exact schedule in advance, and the amount of training I can do is set. Due to this, I have to be more focused. To get all that training done within a short period of time, I really have to focus because if I don’t, I can’t follow along [with the program].

You have been receiving a lot of attention as an outfielder, but the Kiwoom Heroes have quite a depth of players in their outfield already. How do you feel about competing for that spot?

We have a lot of great outfielders. That also means that I have a lot to learn from them. The most important thing is for me to play well. Depending on how well I perform, [the result] will differ. If I play well, then I think I can play in games.

What are you focusing on during spring training?

I’ve been focusing on hitting. It’s important for me to hit the pitches I can hit, rather than just letting them go. Before [in high school], I tended to miss the balls that I could hit, when I wasn’t batting well. But now, I can’t miss those. In addition to swing speed, I also want to increase my bat speed as well. I’ve done live batting recently, and I’m finding my own timing by watching our senior players [on the team].

I’m focusing on learning how to take care of grounders in a more stable position. I think my throws are getting better during spring training.

You normally play as an outfielder, but during spring training, you’ve been practicing at first base as well. How do you feel about that?

I’ve trained for first base once, because our manager told me to. During the season, we don’t know what kind of position I’ll be playing in [as it can change depending on the situation]. Whichever position it is, if the team needs me, I will have to go out there and play well.

Within the team, who is your role model?

It’s Park Byung-ho. He’s the best slugger in Korea. I have a big desire to make big hits. I’ve been watching him practice and learning a lot from it. This also includes the kind of attitude professional players should have. I think he’s the best on both sides, when he’s training or when he’s talking to his fans. I have a long way to go, but I want to become a batter like him.

You are already receiving a lot of attention. Are you overwhelmed?

I do feel pressure, but if I prepare well, I think I can do well. My goal for the season is to get in the starting entry. Then, I want to earn my spot and play in as many games as possible. Once I start playing well, I may be able to become a starting player. Then, I want to take a shot at the Rookie of the Year award.