Regulators take aim at real estate outside of Seoul

Regulators take aim at real estate outside of Seoul 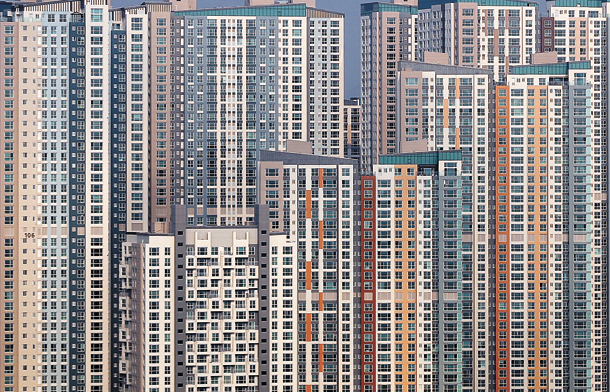 An apartment complex in Suwon on Thursday. The government has classified all Suwon districts as an “adjustment target” that puts the region in tighter real-estate related regulation. [YONHAP]

The government is continuing to tighten regulations to combat rising housing prices, on Thursday, extending the reach of stricter real estate rules to areas around Seoul after prices jumped outside the capital city.

The regulations were less extensive than had been previously anticipated, in line with the concerns expressed by members of the ruling party who are up for reelection in April. The new measures also appear aimed at corralling a “balloon effect” from a round of tough new regulations enacted in Seoul last December. Many had predicted that interventions in Seoul’s housing market would translate to sharp jumps in neighboring communities.

The Ministry of Land, Infrastructure and Transport on Thursday classified all or part of three other cities as “adjustment targets.” The classification puts the neighborhoods under tighter government regulations, including limits on mortgages.

In Suwon, the designation applies to the three districts that did not already have the stricter classification: Yeongtong; Gwonseon; and Jangan. Anyang’s Minan District was also included, as was Euiwang, Gyeonggi.

Effective March 2, the newly added areas will be limited to a loan-to-value ratio of 50 percent for apartments valued below 900 million won ($749,000). For more expensive apartments, the maximum ratio will be 30 percent. Current limits are set at 60 percent regardless of value.

A ban on mortgages for purposes other than house purchases will also be expanded to “adjustment target” areas, having previously applied only to areas classified as “speculative” or “overheated.”

Currently anyone that already owns an apartment in an area classified as an “adjustment target” can only be approved for a mortgage on a new place if they sell the previous apartment within two years. The new regulations will also require the buyer to move into the newly purchased apartment.

The government’s latest measures are considered weaker than what analysts had previously speculated.

Some experts had suggested that more popular areas, including portions of Suwon and Yongin, would be reclassified as “overheated” areas, prompting much tougher restrictions. But the upcoming general elections may have affected the government’s decision, as some members of the ruling party leadership have strongly opposed the move.

Local news outlets reported that during the ruling party lawmakers’ meeting Sunday with the Blue House, they expressed concerns over the government’s plans to impose tough real estate measures on what they dubbed “Suyongseong” - a portmanteau of Suwon, Yongin and Seongnam. All three are major cities in Gyeonggi whose apartment prices have jumped following the stricter regulations against Seoul enacted in December.

While Blue House policy chief Kim Sang-jo had argued for new regulations equivalent to the level of those imposed on Gangnam, Seoul, ruling party leaders were reportedly concerned that the moves could lead them to lose votes in the April election.

“We will continue to focus our monitoring of the market situation not only on areas that have been newly included, but also existing areas classified as ‘adjustment targets,’” Kim said. “We will look into raising the status to ‘overheated’ if the housing prices continue to rise.”

Since the government announced its toughest regulations against Seoul particularly aimed at high-end apartments in Seoul, there have been worries over so-called balloon effects where investments will redirect to areas surrounding the nation’s capital.

“[The government] will continue to monitor the situation closely and will come up with reinforced measures,” he added. “Once a real estate measure is set up, one can’t say its effect will last for a long time.”

Seoul apartment prices appear to be stabilizing, having increased just 0.01 percent in the third week of February compared to the previous week, according to data provided by the Land Ministry. That’s a significant drop considering average prices were growing as fast as 0.2 percent in the third week of December, when the government announced its measures against high-end apartments in Seoul.

During the same period, average apartment prices in Gyeonggi, which had registered an on-week jump of 0.18 percent in the third week of December, sharply increased to 0.42 percent as of the third week of this month.