Mika welcomes his local fans’ enthusiasm: British singer-songwriter is excited to perform in Seoul for the 7th time since 2009

Mika welcomes his local fans’ enthusiasm: British singer-songwriter is excited to perform in Seoul for the 7th time since 2009 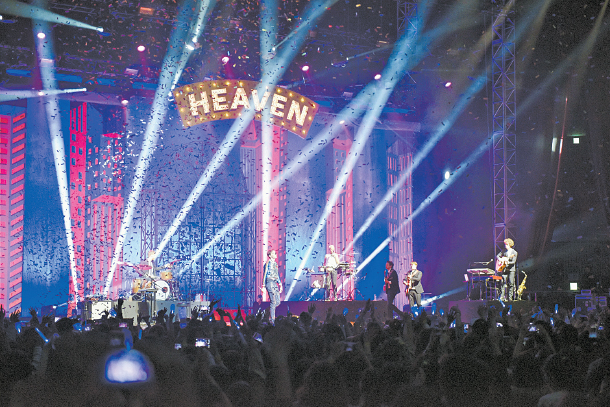 Pop star Mika performs at his Seoul concert in 2016, his most recent performance in Korea. [PRIVATE CURVE]

Are you ready to rock with Mika? He certainly is.

The British singer-songwriter will be performing at the Jamsil Arena in southern Seoul on March 4 and 5 as part of his “Revelation Tour” that kicked off last year. It’s his first time in Seoul since 2016, and concert organizers had to add a date to his original schedule after tickets for the first show sold out in just three minutes. This will be the seventh time he has visited Korea since 2009.

Mika released his fifth full-length album “My Name Is Michael Holbrook” last October, and it is a bold and powerful compilation of songs filled with wit and ingenuity. The singer received positive reviews, especially for the tracks “Ice Cream” and “Tiny Love,” and kicked off his tour in London in November, followed by stops in Australia and Asia.

“I am very excited to be coming back,” Mika wrote in a recent email interview. “Every single one of the six shows we have done in Korea have been exceptional experiences for me and my band. The warmth of the audience, the volume of their singing, the surprises they plan collectively during the concerts. It’s a very special place to play and I always say that in interviews, no matter where I am in the world!”

Mika answered questions from the Korea JoongAng Daily via email prior to the upcoming concert. The following are edited excerpts from his responses.

Q. It’s been four years since you last visited Korea. How have you been?

A. I have been good these past few years. Working hard, and I made a very conscious decision to focus on music and creativity, stepping away from the TV shows I was doing. This has made me happy and helped me understand life and what is important. It also comes at the same time as some very big personal challenges, deaths, illnesses […] However, the writing and the creativity have helped me be strong and stay happy. So it was good timing. As a result also, these shows have a very, very special, urgent quality. 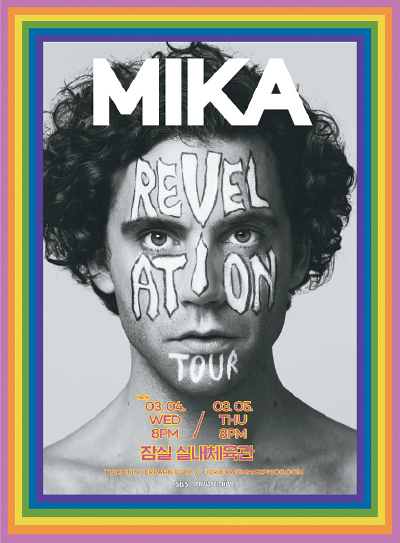 Singer Mika will perform at Jamsil Arena in southern Seoul on March 4 and 5. The March 4 show was added to the singer’s tour schedule after the March 5 concert sold out in just three minutes. [PRIVATE CURVE]

The upcoming will be the seventh time you have come to Korea. What makes you enjoy your shows in Korea and come back again?

It’s the generosity of spirit of the Korean fans, which is so special. They understand that a show is meant to be a roller coaster of emotion. That real life stays outside for two hours. This understanding allows the audience and also me, to lower the defenses we all have in our everyday lives. We become more fragile and bigger at the same time. It’s really an amazing feeling.

A lot of your songs deliver mixed emotions, like the happiness along with sadness found in “Happy Ending” (2007) and “Lollipop” (2005). Why do you like to use two contrasting emotions in your songs?

The contrast is very useful. It creates tension. However it’s more than just a writing technique. It is also reflective of how I deal with life. I always mix the two emotions, it makes it easier to deal with things and see beyond just the sadness, or be blinded by joy.

How would you like the listeners to take those songs in?

As individual bubbles. Each one contains a little bit of air and time from the moment or the part of my life that I am writing about. That’s why my albums are so varied, even within themselves. There are all these different stories that happened during the writing period of the album. The only thing that binds them together is that it happened to the same person.

What is music to Mika? Would you say that it has changed since you first started music?

It’s storytelling. It’s also about collaboration. Music is not a solitary activity. Even a classical composer who writes music at a desk on their own can’t make the music come to life without the musicians or without the audience. It’s this communication that makes it music. I have realized the importance of that. When I was at college, it was about skill and being as good as you can be. I realized later that being good is not enough. Music only counts when it provokes emotion.

You once called yourself “a traveler who doesn’t belong” in a past interview. Do you still think the same about yourself? Is it the freedom that you have that makes your songs?

I belong to a lot of places. And I can adapt quite quickly to a new place. I have started to realize now, more and more, that I generally prefer the south of Europe to the north. People are softer. I just spent time in Germany and Holland [- and] I felt like I was being told off all the time! However it really comes down to curiosity. I am quite curious. This lack of a main “home” has helped me nurture and encourage that curiosity. One day it might change, or it might not. I really don’t know.

You also mentioned in your past interview that you are interested in the indie music scene of Korea. Do you think that Korean music has what it takes to appeal to the global market?

K-pop, Korean culture, film - it’s remarkable the reach it has had and how quickly it has grown over the past five years. The world is changing so fast. People are able to make their own decisions as to what they want to listen to or what shows to buy tickets to. If you live in Chicago, you are no longer going to decide what you will listen to based on what the local hit radio station is playing. This is amazing, because most of the time the commercial stations play the same 10 songs a month. K-pop has grown also thanks to this new way of music distribution. Also its production values are so high. It takes a lot of work and I think that audiences respond to that. What is also so amazing is how “Parasite” has been so internationally recognized. It’s a triumph and a well deserved one.

More and more people communicate online and listen to the same music. Have you ever felt that the language barriers between people affects them in the way they enjoy music?

Language has never been a barrier! This is why we can listen to Portuguese music, Arabic music, French music - even if we don’t understand the words, we can understand the music. The real issue is the media and distribution. They are much less likely to promote an artist from Cape Verde than they are from Los Angeles. The internet is changing that, thank goodness. One of the best ever concerts I’ve seen was Cesaria Evora from Cape Verde, just before she passed away. She sang barefoot and the audience in London lost their minds. Everyone was so happy, so warm. She was like a goddess or priestess and we didn’t understand a word!

What will you be up to this year?

This year I want to start making new music, NOT an album, a series of different EPs which have different styles, both musically and visually. This is something I’m very excited about. Also we are starting to film mini travel and culture documentaries during my travels. Where I go and explore whist on tour. I will also be filming in Seoul, so keep an eye out for me!