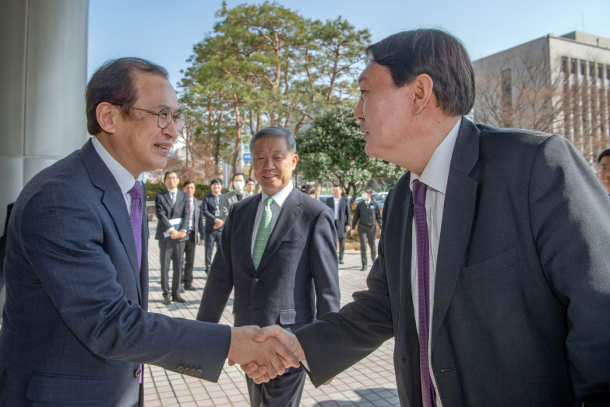 Prosecutor General Yoon Seok-youl, right, shakes hands with Moon Chan-seok, left, head of the Gwangju District Prosecutors’ Office, during a visit Yoon made to the office in Gwangju on Thursday. [NEWS1]

Justice Minister Choo Mi-ae has canceled her plan to host a meeting with top prosecutors, citing the coronavirus outbreak.

Until Wednesday morning, the ministry was not considering a delay. It also rejected the prosecutors’ request that the discussion be aired live or minutes be released later.

The ministry, however, made an abrupt decision to postpone the meeting indefinitely later Wednesday afternoon. “In Daegu and North Gyeongsang, 15 new patients were confirmed,” the ministry said. “We are seeing an emergency with possible community-associated infections.”

Participating prosecutors were only informed later in the afternoon about the delay.

The ministry, however, said the meeting was postponed, not canceled. “After the outbreak calms down, we will host the meeting without fail,” it said.

Speculation is rising that Choo has decided to postpone the meeting to avoid fierce attacks from the prosecutors. Not only Prosecutor General Yoon but also rank-and-file prosecutors have increasingly expressed their opposition to Choo’s idea to separate the prosecutors’ roles between investigation and indictment.

“The ministry could have felt burdened to host the meeting in this mood,” said a prosecutor. “Since the meeting is postponed, we hope constructive discussions take place at each prosecutors’ office about her plan.”

While Choo postponed her meeting with the top prosecutors, she continued to promote her controversial reform measure. The Ministry of Justice posted Thursday a link of Choo’s interview with TBS Radio’s “Kim Eo-jun’s News Factory,” a program often seen as pro-Moon Jae-in administration.

Public servants said it is rare for an interview with a certain media outlet to be featured on the main page of a ministry’s Internet site. She had the phone interview with Kim on Wednesday to promote the ministry’s efforts to counter the outbreak. The ministry is in charge of immigration and customs services, and it was her first media interview since she took office in January.

“When a minister has an interview with a media outlet, we inform the members of the ministry press corps, but we don’t post it on the main page of the Internet site,” said an official of a spokesman’s office of a ministry in the Government Complex in Sejong. “We normally post content created by the spokesman’s office. If you post content from a media company, it may cause legal issues.”

An official of the Justice Ministry said the interview link was posted by the spokesman’s office to promote the ministry’s policy.

While Choo canceled her plan for today’s meeting, Prosecutor General Yoon stuck to his plan and visited Gwangju on Thursday. Gwangju was the second destination on Yoon’s national tour, following Busan, where he met with key associates purged in last month’s reshuffles and refuted Choo’s idea of separating the prosecutors’ powers.

Before entering the building of the Gwangju High and District Prosecutors’ Offices, Yoon addressed the press briefly but did not answer any questions about prosecutorial reform. He only said he used to work in Gwangju as a prosecutor 15 years ago, and he feels emotional visiting the building again.

Jeju Prosecution Head Park Chan-ho and Jeonju Prosecution Head Noh Jeong-yeon are both Yoon’s former aides at the Supreme Public Prosecutors’ Office. Before Choo’s reshuffle sent Park to Jeju last month, he was the head of the public security department of the Supreme Prosecutors’ Office, investigating allegations that the Blue House abused its power to influence the 2018 Ulsan mayoral election and help a friend of President Moon Jae-in win.

Before Choo sent him to Gwangju, Moon was the head of the planning and coordination department of the Supreme Prosecutors’ Office, representing the prosecutors’ position about the administration and ruling party’s campaign to weaken their investigative powers.