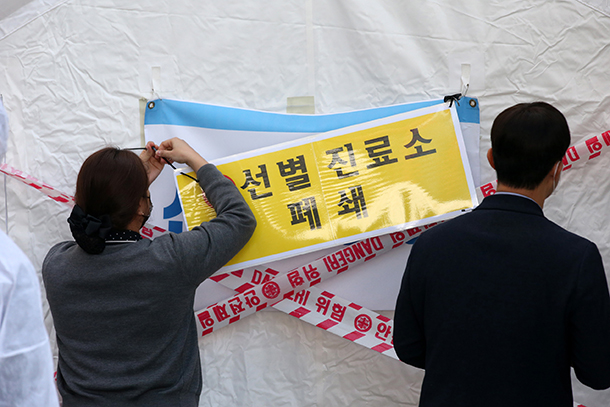 Health officials Thursday announced 31 fresh cases of infection by the coronavirus, 30 from Daegu and North Gyeongsang and one from Jongno District, central Seoul.

Most were linked to a church in Daegu visited twice by Patient No. 31 this month.

Thursday’s was the largest increase in the number of infections in a single day and the second time that a double-digit increase was reported after 20 cases were counted the day before, mostly from the same Daegu church.

Out of Thursday’s 30 new patients in Daegu and North Gyeongsang, officials from the Korea Centers for Disease Control and Prevention (KCDC) said 23 either went to the church or were in contact with churchgoers.

Two not connected with the church were patients at a psychiatric hospital in Cheongdo County, North Gyeongsang. KCDC officials said they don’t know how they contracted the disease because hospital records show neither left the hospital compound over the past month or met any visitors.

The other five patients are being investigated.

Outside Daegu and North Gyeongsang, a 74-year-old man was diagnosed in Jongno District, central Seoul, the third Jongno resident to contract the virus after Patients No. 29 and 30, an elderly couple.

KCDC officials said they were investigating how he got the disease.

Vice Health Minister Kim Gang-lip said Thursday in a press briefing that the virus was starting to spread in local communities unlike the first phase of the virus when patients were normally infected after returning from a foreign trip or contacting people from abroad.

Kim vowed to respond to such changes by revising the government’s countermeasures.