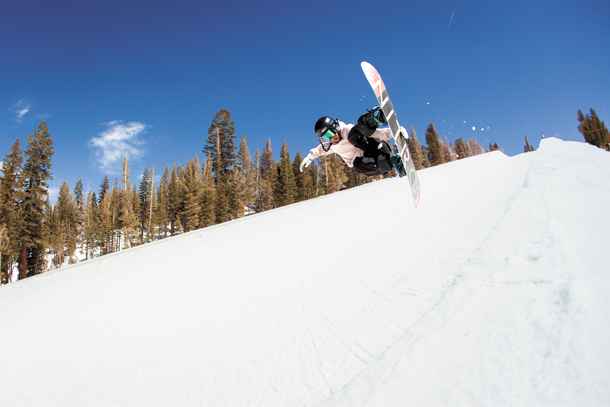 Born in 2006, Lee Chae-un is just 13 years old and is considered a super rookie in the world of Korean snowboarding.

But after winning the National Championship held at the Phoenix Pyeongchang halfpipe course and then again standing at the top of the podium at both competitions of the International Ski Federation (FIS) Asian Cup, held in Pyeongchang on Feb. 10 and 19, he has become recognized as one of the country’s best.

“I just told myself not to make any mistakes, watch the senior snowboarders and try my best to chase after them,” Lee said. “But then when I saw my name at the top of the scoreboard, I couldn’t believe it. Not only once, that happened twice. When I think about the time I walked up to the podium, wow, I’m getting nervous again.”

Defeating senior members on the Korean national snowboarding team like Lee Kwang-ki and Lee Joon-sik was particularly impressive for such a young athlete.

“At the final, I started with a frontside 10 and performed five different skills,” Lee said. “I was a little more nervous because this was the first Asian Cup hosted in Korea, but I kept telling myself to snowboard just like when I practiced and it led me to see good results.”

Lee first started snowboarding at age 6. At the time, his father was looking for a winter sport that he could enjoy with his two sons.

Although he didn’t get proper lessons, Lee made improvements every year, and only four years after he started snowboarding, he started his elite career.

“He was also really good at football [too],” Lee’s father said. “Some of the football coaches in elementary schools requested me to have him play football. After I talked to him, we decided to focus on snowboarding.”

“When I’m not snowboarding, I think playing football with my friends is the most fun thing to do,” Lee said. “I really like Son Heung-min, and since I want to be like him, I try to mimic his moves.”

Similar to how he tries to mimic Son’s moves when he plays football, in snowboarding, Lee considers Shaun White of the United States, the three-time Olympic gold medalist in halfpipe, as his coach. Lee says he learned all his moves by watching clips of White and that was his only textbook for the sport.

“There are a lot of great competitors in halfpipe, but based on my standards, the coolest is White,” Lee said. “In terms of cool, I also watch clips of Ayumu Hirano [of Japan].”

Lee still has a long ways to go until he gets to the point to compete against the world’s top halfpipe snowboarders, but he is rated to have the potential to become one later in the future. Kim Soo-chul, the head coach of the Korea’s snowboard halfpipe team, calls Lee “a prodigy.”

Although Asia is not known for its snowboarders, Lee’s achievement could pave the way for the sport to become more popular in the region and mirror the success of Lee Sang-ho who became Asia’s first-ever athlete to medal in an Olympic alpine snowboarding event when he won a silver medal back at the 2018 PyeongChang Winter Games.

“In terms of his talent, it’s hardly seen in Korea,” Lee said. “His concentration and performance are just as good as the current national team snowboarders. He is very quick to understand and is brave. As long as he doesn’t get any injuries, he could one day surprise the world in this sport.”

The FIS World Cup, which distributes Olympic ranking points, only allows competitors aged 15 or older, meaning the earliest Lee will be able to start competing in World Cup events will be next summer.

To get to Beijing, he would first have to earn his spot on the Korean national team, and within a short period of time, about half a year, he would have to get his world ranking inside the top 30.

“Even if it’s not snowboarding, competing at the Olympics is a goal for all the athletes,” Lee said. “I’m still young and have a lot to learn. I’m not going to rush. My goal for now is not winning a medal. Instead, it’s learning skills. I first want to become a snowboarder who can successfully perform a backside double McTwist 1260 [a high-level technique White performed for the first time].”