Samsung’s much-hyped second attempt at a foldable smartphone, the Z Flip, is reselling for as much as 15 million won ($12,435) for limited-edition devices stylized by New York City-based designer Thom Browne.

The limited-edition phones sold out in two hours and 30 minutes, according to the tech giant. They went on sale last Friday at midnight, priced at 2.97 million won, and generated enough web traffic that the server for the company’s online mall temporarily crashed. 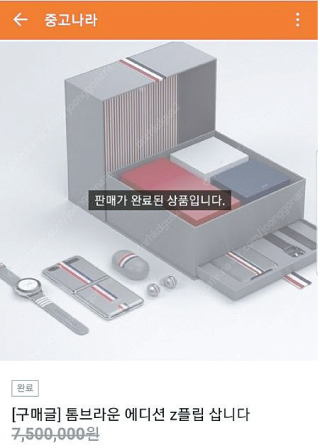 Samsung had to scrap its initial plans to sell the designer phones at five offline stores due to growing concerns over the spread of the coronavirus from China. Locations in Gangnam District in southern Seoul and Busan were originally included in the list of stores that would stock the devices.

With the access to the smartphone narrowed to web sales, a substantial influx of online buyers was expected before sales began.

Rumors had already been spreading online for secondhand sales, such as Joonggonara and Bungaejangter, that a premium of 1 to 3 million won would be tacked onto the already pricey smartphone.

Although the smartphone hasn’t yet been delivered to customers, the devices began showing up on online marketplaces as soon as Samsung’s stocks were sold out. Most were selling in the range of 4 million to 15 million won.

Samsung did not disclose how many of the Thom Browne editions it sold. But the tech giant didn’t rule out the possibility of re-issuing the specially-designed phones.