Harris offers a rare peek behind the iron gates

Harris offers a rare peek behind the iron gates 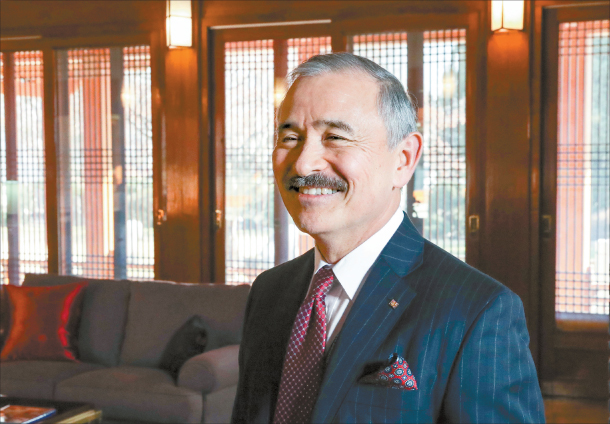 U.S. Ambassador to Korea Harry Harris gives a tour of his residence in Seoul, Habib House, to the JoongAng Ilbo on Feb. 11 to celebrate the centennial of the birth of former U.S. Ambassador Philip Habib, after which it is named. [WOO SANG-JO]

Beyond a set of iron gates is an elegant hanok, a traditional type of Korean housing - that served as inspiration for the set of “Mr. Sunshine,” a hit South Korean drama series that takes place in the late Joseon period (1392-1910).

But visitors rarely get the opportunity to see this particular hanok, Habib House, up close as it serves as the residence of the current U.S. Ambassador to South Korea Harry Harris.

However, on Feb. 11 the Joongang Ilbo was lucky enough to get an invitation to peek behind the iron gates and attend an event to commemorate the centennial year of the birth of the U.S. ambassador whom Habib House was named after.

Philip Habib served as the 9th U.S. ambassador to South Korea from 1971 to 1974. Because the ambassador’s residence was falling into disrepair at that time, Habib decided to raze the original residence and start anew. His vision was to construct a building with American wood but was fashioned in the Korean spirit, a residence that preserved Korean traditions.

During a tour of the hanok, Harris emphasized that this residence was “symbolic of the alliance between the United States and South Korea.”

He was also quick to mention the incredible success of the movie “Parasite,” drawing attention to the four Oscars it recently won. “The movie was terrific,” Harris said while relaying that he learned to make chapaguri, a Korean dish made popular through the movie, and had eaten it with the rest of the embassy staff while watching the awards ceremony. His bowl of chapaguri is proudly displayed in a post on his Twitter feed.

Altogether, the tour that Harris gave of his residence stretched to an hour, a normally unprecedented amount of time. “2020 is Habib’s centennial year, and we want to celebrate this throughout the year,” Harris said, referring to how this tour was merely a taste of what was to come.

He continued the tour and described the wooden beams supporting the residence, which were shipped from Tennessee, his home state. Watching him describe the residence, it was blatantly clear how much the ambassador cherished this place. Upon closer inspection of the residence, the reason for his affection becomes clear: Habib House is steeped in the traditions of the U.S.-South Korea alliance.

The moment you enter from the front gate, two framed pictures come into view. One is a black-and-white photograph. The other is an oil painting.

In the photograph, a U.S. soldier is planting a flag on the roof of the original residence. When Seoul fell to the North in 1950, there was a brief moment when North Korean forces occupied this residence. This photograph appears to be meaningful because it portrays the moment when the United States reclaimed the residence. An interesting point to note is that the North Korean forces left the residence as it originally was. Although they catalogued and photographed everything, nothing was stolen or damaged.

Facing this photograph is an oil painting of koi fish swimming in a pond. When Harris was appointed the U.S. ambassador to South Korea, he and his wife commissioned a local Hawaiian artist to paint this portrait. The American flag is painted on the back of one koi, and the South Korean flag is painted on the other koi swimming alongside it. The title of the painting is “We Swim Together,” which is a throwback to the phrase “We Go Together,” the historic motto of the U.S.-South Korean alliance. Before accepting his post as an ambassador, Harris was the commander of the U.S. Pacific Command. This background appears to have contributed to the theme of the painting.

These are not the only objects of his affection, however. Harris appreciates Andong soju, a type of traditional Korean liquor, and hahoetal, traditional Korean masks, as well. Harris led the reporters into a tidy room annexed to the side of the living room. Hahoetal decorated one wall. A handwritten letter written by Kim Gu, a leader of the Korean independence movement, was framed near the entrance. It was addressed to the U.S. Embassy, wishing for an equal and cordial alliance between the United States and South Korea.

An Andong soju and whiskey collection furbished the other wall. Harris had prepared a special experience. Whipping out a cocktail mixer from the desk, he popped open a whiskey bottle, explaining that this particular bottle had been sent by his father from Tennessee and that “it contains a secret ingredient.” He then poured Andong soju in, shook the mixer and poured the contents into a martini glass, garnishing the drink with a cherry and an olive. He named this cocktail, which blends the grains of Tennessee with the rice of the Gyeongsang region, the “Gangnam-style Manhattan.” This creation, just like the chapaguri, also made it to Harris’s social media.

There was another area in the residence to enjoy the cocktail, however. Harris led the way to a courtyard, where a miniature replica of Poseokjeong Pavilion - a famous pavilion from the Silla Dynasty (57 B.C. to A.D. 935) in Gyeongju, North Gyeongsang- was placed in the middle of an elegant garden pond. This pond is one of Harris’s favorite places in the residence. He explained that on a good afternoon during the Silla Dynasty, in the pond around the original pavilion, koi would gather in the waters, and the noble men would gather to enjoy their cup of soju. Harris added that whenever he comes out to this courtyard, he can get a real taste of the refined artistic taste of the nobles of the time.

Another area of the residence that Harris cherishes is the library. Here, books written about the U.S.-South Korean alliance and North Korea line the shelves. A beaming portrait of Harris, President Moon Jae-in and Foreign Affairs Minister Kang Kyung-wha was propped up in the center of the bookshelf.

Harris again emphasized the importance of the U.S.-South Korean alliance and the symbolic significance that Habib House holds for this partnership. On whether he could comment on the challenges that this alliance is facing, Harris answered, “I would say that there are always issues in any alliance.” He referred to the vision that leaders such as Philip Habib and former South Korean President Kim Dae-jung had of South Korea and the United States: one of partnership. According to Harris, “Habib House has always been a steadfast symbol of this vision.”