If at first you don’t succeed, fail, fail again says president of Postech

If at first you don’t succeed, fail, fail again says president of Postech 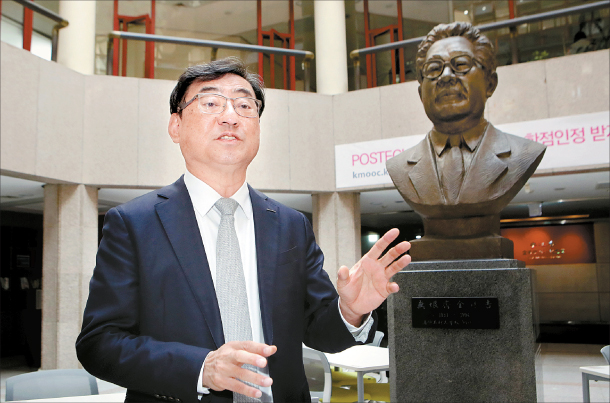 Kim Moo-Hwan, president of Pohang University of Science and Technology, says students must learn from their failures in order to achieve success. [SONG BONG-GEUN]

Kim Moo-hwan, president of Pohang University of Science and Technology (Postech), says Korean society places too much emphasis on results over processes.

Postech, the first research-oriented university to be established in Korea in 1986, has about 3,400 students. Of these, 1,300 are undergraduates while 20,000 are graduate students. The university strives to become a world-class institution by emphasizing well-roundedness as well as specialized education to produce intellectuals with integrity and creativity who are not afraid of failure.

According to Kim, the most important factor in educating students is to help them improve their resilience so that they can pick themselves up after failing.

Q. Postech is known for its fourth-generation synchrotron radiation facility and Open Innovation Big Data Center at its campus in Pohang, North Gyeongsang. Can you tell us more about these?

You attended CES 2020, the world’s largest and most influential electronics trade show held in Las Vegas, from Jan. 7 to 9. Can you tell us more about it?

Since 2016, Postech’s students in the department of electrical engineering have been given opportunities to visit CES. This year, 17 juniors attended CES 2020 and visited many booths from diverse global companies. The experience helps students broaden their horizons.

What impressed you and the students the most during the trip to the United States?

We visited Google X, Google’s secret laboratory. Google’s autonomous car was invented at Google X. The company has a unique philosophy known as “Fail Fast.” There are many posters saying “Think Big. Fail Fast. Do it Now” plastered on the walls of the company. The company holds parties for employees who acknowledge their failures. An employee who fails before others is rewarded as well. What Google believes is that employees are more likely to take on new challenges after they experience many failures. For Google, employees who fail earlier than others are the ones who work the hardest to achieve the best outcome. This kind of unique ideology was very impressive.

It seems like Postech is set to be a leader in the coming era of artificial intelligence (AI). What are your thoughts?

Last year, Postech built its future-oriented blockchain campus with the cooperation of Yonsei University in western Seoul. Postech took on a new challenge this year and is providing students with AI education. Starting this year, all freshmen at Postech, regardless of their majors, are required to take a basic AI course while sophomores, juniors and seniors have to take up to nine credits in AI-related courses. The courses include education on big data, computer vision and natural language processing. AI is not just a field of study; it’s another brain given to humans. No matter what kind of majors students choose, communicating with AI is essential.

Don’t you think having skilled professors is the most essential factor in providing students better AI education?

Having great professors is what all universities want. In order to foster superior professors, it is important to support them in conducting good research. Korea started to focus on AI two years after the United States. However, we have great potential to catch up. Since we are smarter than them, we can catch up with only a quarter of the resources that America invested.

Will Postech open a new AI graduate program in March?

We selected the most elite students for the new graduate school. Of all who applied for the program, only 18.5 percent were accepted. The combined master’s and doctorate program had a high competition ratio of 11 to 1. Postech will provide specialized education for those who want to conduct research on AI or who want to establish their own companies related to AI technology.

Do you think Postech can foster global leaders like Demis Hassabis, the CEO of Google’s DeepMind?

It’s possible. The key point is that we need convergent thinking leaders who love challenges and pursue self-directed learning. Professors should become individual mentors for students. Again, it is important for professors to encourage students to fail so that they can learn from their failures.

It seems that many universities are struggling with their attempts to innovate, what are your thoughts?

It’s because many universities continuously come up with new visions without setting consistent goals. The founding principle of Postech is to become a global university that contributes to the nation and humanity by conducting in-depth science and engineering research. I think that’s enough.

Postech is behind Hong Kong University of Science and Technology (HKUST) and Nanyang Technological University’s College of Engineering (CoE) in rankings, both of which were established after Postech. Why do you think this is?

As Korea is a non-English-speaking country, we don’t have as good a reputation as HKUST and CoE. However, in the last five years, Postech has been more active in fostering cooperation with the private industry when compared to HKUST or CoE. In the ranking of World’s Most Innovative Universities 2019 selected by Reuters, Postech was ranked 12th, placing it at the top among Asian universities.

When you served as dean of student admissions at Postech in 2011, you devised an admissions system to select students through rolling admissions. What was your intention behind this?

All students who apply for our school are nearly equal in their abilities. Rolling admissions are the best way to select 320 students who have the most integrity and self-directed learning habits of all applicants. Although the Ministry of Education has been demanding universities accept 30 percent of their students through national examinations, Postech will select all our students through rolling admissions.

Postech established Mueunjae School of Undergraduate Studies in 2018. Would you say it’s been successful?

Mueunjae - which the school is named after - was the pen name of Kim Ho-gil, the first president of Postech. It means that there are no boundaries in learning. The Mueunjae School of Undergraduate Studies allows all undergraduates to be admitted without having selected their majors. They are allowed to choose their specific majors as soon as they are done with their third semester. In that sense, different departments can innovate and compete with others. Students are also allowed to change their majors at anytime.