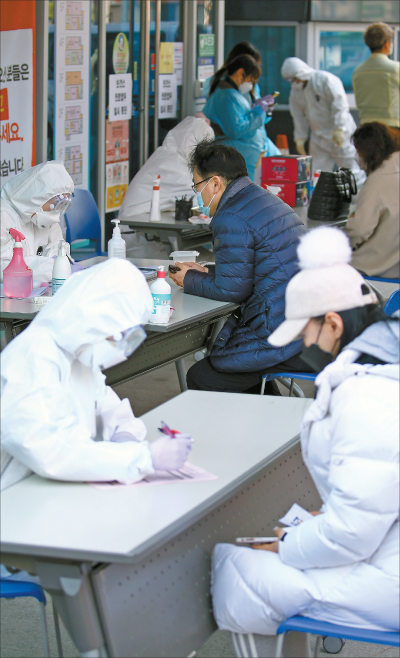 Members of the public get tested for the novel coronavirus at a public health center in Nam District, Daegu, where the Shincheonji church is located, on Friday. The church is the suspected locus of many recent infections. [YONHAP]

Korea experienced its largest spike in reported coronavirus cases in a single day Friday, when 100 people were diagnosed, bringing the country’s total to 204.

Cases have doubled for two days running, and Korea now has the largest number after China, if passengers on a cruise ship in Japan are excepted.

In a morning briefing, health officials announced 52 new cases had been confirmed overnight. At 4 p.m., 48 additional cases were confirmed.

80 of the new cases occurred in Daegu, five in Seoul, four in South Gyeongsang, three in North Gyeongsang, two each in Gwangju and Gyeonggi and one each in North and South Chungcheong, North Jeolla and Jeju.

According to the Korea Centers for Disease Control and Prevention (KCDC), 144 of all 204 confirmed cases involved believers of the Shincheonji religion, confirming that members of the controversial Christian sect seem to be inadvertently spreading the disease across the country.

KCDC chief Jung Eun-kyeong said in a regular briefing that while nearly all new cases since Tuesday were linked to Shincheonji followers, quarantine authorities were still investigating when exactly the virus began circulating among worshippers.

Health authorities are in the midst of conducting a full investigation of all members of the Shincheonji church branch in Daegu, which claims to have a membership of around 9,000. The government has so far identified 4,475 members in Daegu, of which 544 reported recent symptoms associated with the virus.

Of the 15 other non-Shincheonji cases confirmed Friday, health authorities said one was linked to Daenam Hospital in Cheongdo County, North Gyeongsang, where Korea’s first coronavirus victim - a 65-year-old man also suffering from schizophrenia - died on Wednesday. 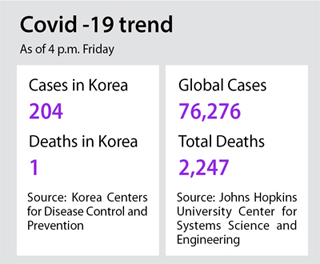 That hospital was where a funeral service for the older brother of the Shincheonji church’s leader, Lee Man-hee, was held between Jan. 31 to Feb. 2. Many followers are believed to have attended the service, though the church denied Patient No. 31 - a woman from Daegu who was the first Shincheonji follower diagnosed with the virus - visited the hospital.

Daenam Hospital alone has produced 16 confirmed virus patients so far: five nurses and 11 patients at the institution for other medical reasons.

Shincheonji representatives did confirm, however, that Patient No. 31 had visited Cheongdo on Feb. 1, releasing her credit card records from the visit that showed she went to a sauna and ate at a restaurant. According to the same records, by the next day, she was back in Daegu, where she attended religious services at the Daegu church on Feb. 9, and again on Feb. 16.

In a central disaster headquarters meeting Friday, Prime Minister Chung Sye-kyun said Daegu and Cheongdo would be designated special control areas that would receive central government support in the form of medical resources and personnel.

In spite of the church’s denial about the links between the funeral and Patient No. 31, the government has expressed doubts whether the sect is telling the truth.

According to the Blue House spokesman, President Moon Jae-in on Friday ordered authorities not to rely on information provided by the church and mount a thorough investigation to reveal who attended the funeral in Cheongdo early this month.

Health authorities believe the method by which services are held at Shincheonji gatherings, where worshippers sit in close proximity to one another, may have facilitated the spread of the virus. Around a thousand worshippers who attended the same Sunday services as Patient No. 31 have been required to stay home in self-quarantine as they undergo testing, officials said.

Shincheonji is a New Age religious movement centered around Lee Man-hee, whose followers regard as a physically immortal Messiah figure. Most mainstream Christian denominations in Korea say Shincheonji is a cult that practices exploitative methods to draw in worshippers.

In a text message sent to followers on Friday, Lee labeled the current outbreak affecting his sect “the work of the devil meant to prevent the expansion of Shincheonji.” Calling upon followers to strengthen their faith, Lee ordered a temporary halt to all gatherings.

According to its own website, the Shincheonji church last year established a branch in Wuhan, China, the epicenter of the coronavirus outbreak. The sect, however, removed the mention of its Wuhan branch from its homepage when press reports surfaced.

Jung said the KCDC was aware that the church has branches in China and other countries and that an investigation was ongoing as to what exchanges may have taken place between Korean worshippers and China’s Hubei Province, where Wuhan is located. 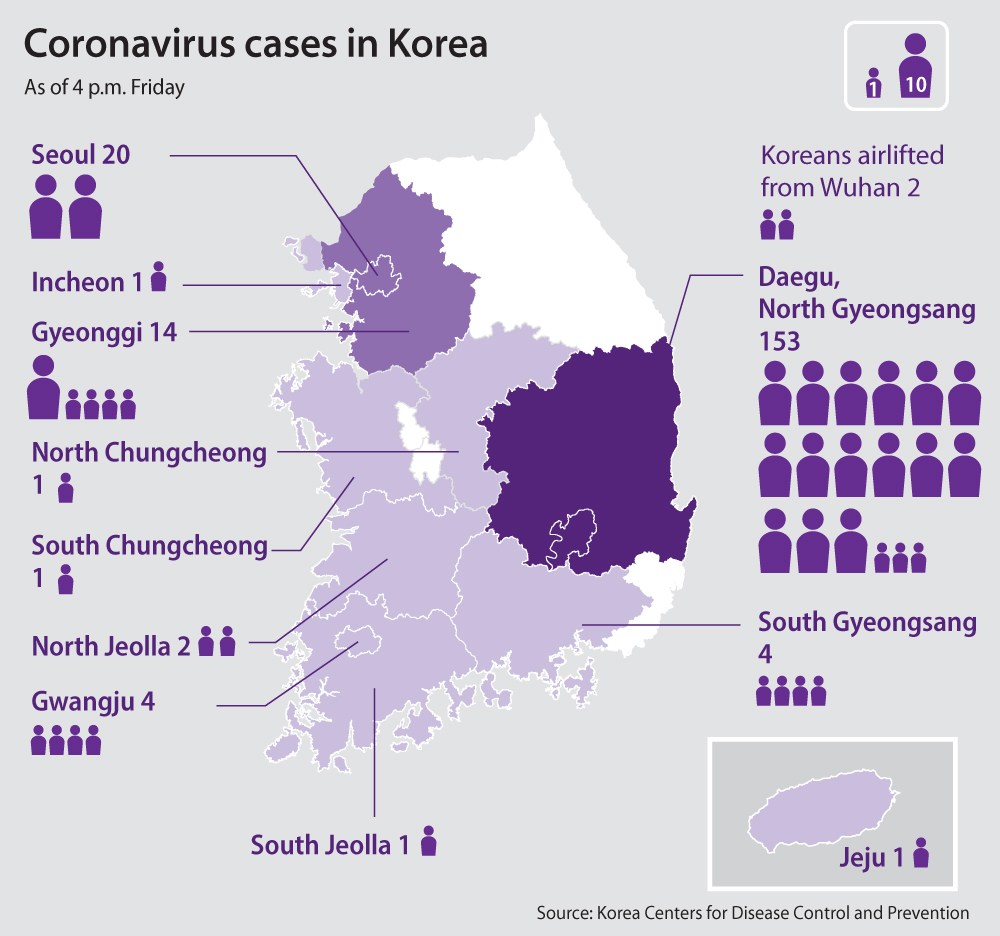 “We cannot rule out possibilities that church members may have visited China and other infected countries or had contact with people who came from those countries, so we will investigate both likelihoods,” Jung added.

With Shincheonji church branches deemed to be a main source of the contagion, Seoul Mayor Park Won-soon announced in an emergency briefing Friday that all of the sect’s churches in Seoul would be closed for disinfection.

Friday saw three more coronavirus cases in Seoul - all involving Shincheonji members - in the districts of Jongno, Seongdong and Seocho.

Park also declared a temporary ban on all mass public rallies at Gwanghwamun Square, Seoul Plaza and the Cheonggye Plaza - the three most frequently used public spaces in the city for political demonstrations - “in order to protect the elderly who are vulnerable to infectious diseases.”

Violators of the ban, which is founded on an article in Korea’s Infectious Disease Control and Prevention Act allowing the government to restrict mass gatherings for quarantine purposes, will be fined 300,000 won ($248), according to city officials.

Amid the spike in infections over the last two days, the central government Friday streamlined health guidelines to allow medical facilities to conduct coronavirus tests regardless of whether suspected patients have visited a foreign country recently. Patient No. 56, a 75-year-old man, visited three health facilities early this month after showing symptoms but was refused testing because he had not visited China recently nor had contact with any confirmed patients.

The number of health facilities capable of conducting coronavirus tests will also be increased from 77 currently to 100.

Yet because most new cases remain limited to the Daegu and North Gyeongsang and “have not spread on a nationwide level,” Health Minister Park Neung-hoo said the government would keep the official alert level at “orange,” the third-highest level out of four.

“As a result of our investigations, we have concluded that infections have only just begun spreading on a region-wide level and that they are still controllable given they are limited to a certain group,” Park said at a briefing on Friday.

According to the government’s standard response protocol for disasters, a limited spread of a foreign-born infectious disease mandates an alert level of “orange,” while a wider spread across an entire region or nationally warrants the alert be raised to “red,” the highest level. On Jan. 20, when Korea confirmed its first virus patient, the alert level was raised from “yellow” to “orange.”

The newest outbreaks centered around the Shincheonji church in Daegu are prompting other countries to issue advisory warnings about traveling to Korea. Taiwan on Friday elevated Korea’s danger status by one level.