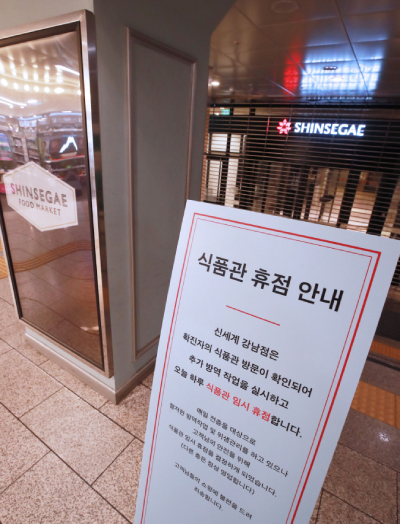 A sign in front of Shinsegae Department Store’s Gangnam branch informs of a temporary closure on Sunday. [YONHAP]

Department stores and supermarkets around the country are rolling down their shutters at even the slightest hint of contamination by the coronavirus.

The icons of the retail sector are taking no chances.

Shinsegae Department Store’s Gangnam branch in southern Seoul, which is the most lucrative department store branch in the country, closed its basement food court on Sunday, though other floors remained open.

The closing came after Shinsegae was informed by government authorities that a person infected with the coronavirus had eaten there on Wednesday afternoon. The entire branch was closed upon receipt of the information late Saturday.

“After a discussion with field investigators, we decided to temporarily halt operations of the specific spot visited by the customer, considering she was wearing a mask, did not enter any other areas and the building was being regularly disinfected, regardless of the patient’s visit,” Shinsegae explained in a statement.

It was the first time Shinsegae closed due to concerns about the visit of an infected person. In February, Shinsegae stores were disinfected as a preventative measure.

Lotte Department Store’s Yeongdeungpo branch was shut Sunday indefinitely after it was found that a person who has tested positive for the virus visited the branch.

The company said in a statement Sunday that it received a notice from the Yeongdeungpo District authorities that Daejeon’s second confirmed coronavirus patient had visited the store’s basement floor on Wednesday.

Lotte will open the branch after discussing the matter with the authorities.

The company had closed down its main branch in central Seoul along with its duty free store at the same location for three days earlier this month, reportedly incurring 80 billion won ($66 million) worth of loss. The company’s Jeonju branch in North Jeolla opened doors today after halting operations Friday afternoon.

In addition to the Lotte and Shinsegae locations, four Emarts - one in Seongsu, eastern Seoul, one at Kintex in Goyang, Gyeonggi, and two in Daegu - one Homeplus in Gwangju and Hyundai Department Store’s Daegu Branch were also shut for a time.

Emart’s Gwacheon branch did not open on Sunday as it shares the same building with a Shincheonji church. Patient No. 31, a member of the sect, was confirmed to have the disease. The branch’s Sunday close was recommended by the Gwacheon government.