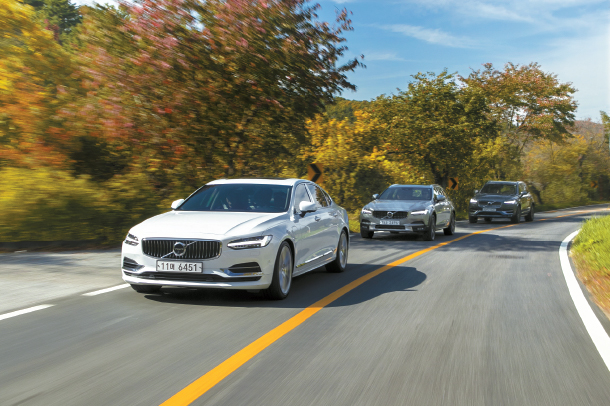 It reached a milestone of selling more than 10,000 cars in the country, alongside Mini Korea and FCA Korea, largely thanks to the popularity of its so-called 60 cluster, consisting of the S60 sedan, V60 wagon and XC60 SUV.

But it begs the question: Will Volvo be able to maintain its high-selling status this year in the midst of globally declining demand for new cars?

The 60 cluster may be a cash cow for Volvo, with a more approachable price range and decent performance, convenience and safety features. But consumers often rate the brand not from the most popular models but from those with the highest price tags.

Brand value carries the general sales figures for a company, and the same goes for Volvo. When it comes to showcasing how impressive a carmaker can be, the answer usually comes down to how luxurious, powerful and impressive its most expensive models can be.

So to answer this question myself, earlier this month I got behind the wheels of the S90 T8 Excellence, the XC90 T8 Inscription and the V90 T5 Pro for a full day driving around Gapyeong County, Gyeonggi.

For this review, I’m focusing on the S90, the model that impressed me the most and seemed to be the prime example of what Volvo tries to offer potential buyers with loads of cash.

With its S90, XC90 and V90, together consisting the 90 cluster, the Swedish automaker best known for the safety of its models showed it has the chops to pursue luxury and class like any other well-famed global automaker. The different vehicles each showed Volvo is capable of providing comfort and pleasure.

But it’s possible the distinctly Swedish identity didn’t quite click 100 percent with Korean consumers’ desires when it comes to luxury cars - a factor that may make some think twice before opening their wallets.

There certainly are dozens of noticeable differences between the three vehicles. But the indisputably gentle appearance and performance bind them together.

As for the S90, like the other two models, the mid-size premium sedan looked luxurious from every angle. It definitely had a distinct visual identity that allowed it to stand out from other companies’ offerings. Sharp headlamps and a rectangular radiator grille showed Scandinavian design prowess and offered hints of why Volvo has attracted a loyal following among its customers.

The car looks sleek and dynamic, with low height and well-connected lines along the front and back. It follows the design and manufacturing philosophies of the Swedish automaker, staying loyal to the “Made by Sweden” tradition Volvo has maintained through the years.

I was impressed even more when I opened the door for a drive. It’s a given that most luxury vehicles are geared toward providing the best experience for those in the back seat. But I was impressed by how much attention Volvo paid to making the car pleasurable for drivers.

Napa leather-covered seats wowed with comfort, and the shiny metallic logo imprinted on the steering wheel was surprisingly harmonious with the wooden dash panel. The car is also spacious - my knees never touched anything while driving.

The back seats, of course, seemed spacious and roomy for passengers of any size. The lounge console design concept expanded the chairman seat as much as it could, reminding me of the first-class aircraft seat that I could never dare to pay out of my own pocket.

The car was also ready to provide additional comfort in the back seats, with its “chairman” features. The back seats could be shifted to a reclining position, and as with other seats, they boasted ventilation and heating.

On the left there was also a 4.3-inch touchscreen display that allowed me to turn up the air-conditioner and control the temperature. A side pocket for tablets complemented tables for each back seat, on top of power plugs and USB ports.

And if it’s time to pop some Champagne, there’s a 16-liter refrigerator with crystal cup holders, a feature that I’ve only seen in a Rolls-Royce. The car was providing everything in terms of convenience for non-drivers, with a price tag of 99 million won ($82,000).

There certainly were impressive features for drivers as well, even though the car didn’t have everything I wanted. I was surprised by the lack of a wireless smartphone charger, a feature I frequently encounter in cars recently released in Korea.

The infotainment system with a display resembling an iPad also was a little behind than others. The navigation system was slightly delayed in following the car movement, which prompted me to power up the navigation app from my smartphone for better directions and guidance.

Thankfully, that frustration was blown away by the excellent music quality from the S90’s Bowers & Wilkins high-end speaker system. With 19 speakers and air subwoofers embedded throughout the car, the S90 offered a studio-level auditory experience at any moment.

The Orrefors crystal-made gearshift added elegance to the interior and tempted me to start up the car as soon as I saw it.

The distinct lack of “vroom” when starting the car certainly wasn’t what I expected. It took me a good five minutes to learn that the car doesn’t make any distinguishable noise when started, which reminded me that the S90 Excellence is offered as a plug-in hybrid model.

With a 2.0-liter gasoline engine and an electric motor, the S90 didn’t make any noise when traveling at low speeds, further proof of the elegance and pursuit of luxury that Volvo sought to highlight in the high-quality sedan.

That hybrid technology also helped the car boast dynamic performance on the highway and on curvy roads. It hugged the road well at every point, and when put to “dynamic” for the driving mode, the engine roared louder and connected more with the driver.

I could have tested out the “pure” mode, which lets the car run solely with its electric motor, but I didn’t care to let go of the “dynamic.” There was simply no reason to, when I was having that much fun.

Compared to the S60, which didn’t seem so sporty for me when driven in September, the S90, with eight-speed automatic transmission and the latest all-wheel drive system, checked all the boxes for the list of expectations I had from seeing the press kit.

The S90 T8 Excellence is rated at 405 horsepower and 40.8 kilogram-meters (295 pound-feet) of torque, strong numbers that any car wants to achieve when it comes to high-end consumers. And the car truly lived up to every number on its list of specifications.

The “Pilot Assist” feature, which made turns and controlled speeds for different traffic conditions, also gave me a reminder that the industry has made great steps toward developing fully autonomous vehicles.

The excitement only grows when considering that Volvo is planning to launch a face-lifted version for the S90 in the second half of this year. Many auto publications are expecting another upgrade to the plug-in hybrid technology on top of better design, convenience and safety features.

While the car may not offer everything that picky Koreans want from luxury models, the S90 sets the bar for what Volvo wants to promise for drivers and passengers alike in presenting the 90 cluster.

Volvo Cars Korea may be able to continue its success from last year, given the fact that the S90 is not so behind others in most aspects.