Virus infections shoot up to 556 and death toll hits 4

Virus infections shoot up to 556 and death toll hits 4 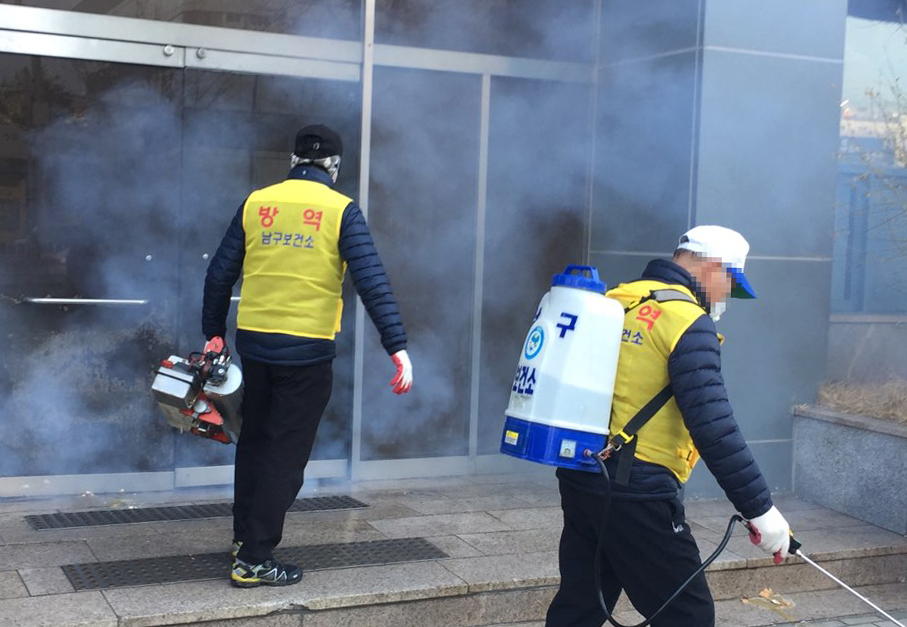 Quarantine workers decontaminate the entrance of the Shincheonji church in Daegu on Sunday, which is at the center of the coronavirus outbreak in the country. [YONHAP]

Two more patients died from the coronavirus in Korea over the weekend, bringing the total death toll to four as infections skyrocketed to 556.

Three of the four deaths are linked to Daenam Hospital in Cheongdo County, North Gyeongsang, where nearly 100 other people including medical staff have contracted the disease.

Local health officials say they still don’t know for sure how the virus first reached the hospital. But Daenam Hospital was where a mourning altar was set up between Jan. 31 and Feb. 2 for the older brother of the Shincheonji church’s leader, Lee Man-hee. Many followers are believed to have attended the service. The Shincheonji church is a controversial Christian sect.

A total of 352 new infections were reported throughout the country Saturday and Sunday morning, and most can be linked or directly traced to a Shincheonji church building in Daegu.

By Sunday 9 a.m., 309 coronavirus patients out of Korea’s total 556, or 55.6 percent, were either Shincheonji worshippers or people who were in contact with them, the Korea Centers for Disease Control and Prevention said.

How the virus initially got into the church community is still a mystery.

By Sunday morning, 18 people had been discharged from hospitals after full recoveries, but seven patients were said to be in critical condition, while the rest are in stable condition.

Daegu Mayor Kwon Young-jin said in a press conference Sunday that a 4-year-old girl in the city appeared to have contracted the disease from her daycare center teacher, becoming the youngest coronavirus patient in the nation.

Gangwon, Daejeon and Ulsan, which had been the last remaining patient-free areas, all reported their first coronavirus patients Saturday. The virus has now officially spread to every single metropolitan city and province.

Seoul has seen 24 patients, many from Jongno District, central Seoul, where nine people got infected.