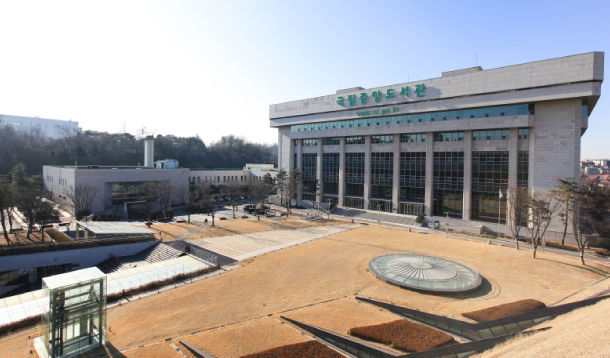 The National Library of Korea in southern Seoul is among the national institutions shutting down temporarily due to the coronavirus outbreak. [NATIONAL LIBRARY OF KOREA]

All national art galleries, museums and libraries throughout the country will be temporarily shut down due to the coronavirus outbreak, the Ministry of Culture, Sports and Tourism announced Monday.

“Since the government elevated its official alert level to the highest level on Sunday, we have decided to shut down the 24 public museums, galleries and libraries affiliated with the ministry,” the Culture Ministry said in a statement. “Starting Monday, we will be shutting them down in stages.

“Some of the facilities have been shut down since earlier this month, including the national gallery in Deoksu Palace, Daegu National Museum and National Library of Korea in Sejong.”

On Monday, the national museums in Buyeo County and Gongju in South Chungcheong, Jinju and Gimhae in South Gyeongsang, Cheongju in North Chungcheong, Jeju Island, Chuncheon in Gangwon, Naju in South Jeolla and Iksan in North Jeolla closed their doors, as well as the National Museum of Modern and Contemporary Art in Gwacheon, Gyeonggi, and Cheongju, and the National Library of Korea in southern Seoul.

Additionally, the national museums in Gyeongju in North Gyeongsang, Gwangju and Jeonju in North Jeolla have been put on hold.

The ministry said it will announce when the institutions will open again.

The halls and galleries of the Seoul Arts Center in southern Seoul will also be closed this week.

All lectures and classes at the center have been canceled as well, through March 2.

Museums and art galleries run by city and provincial governments including the Suwon Museum of Art in Suwon, Gyeonggi, and the Nam June Paik Art Center in Yongin, Gyeonggi, are also going on a temporary break.

Guided tours at four palaces in Seoul have been put on hiatus since earlier this month, but the palace grounds will remain open to the public.