One hit after another for small family businesses

One hit after another for small family businesses

It’s never easy being your own boss. Now, it seems, it’s more difficult than ever.

For five quarters, through the final quarter of 2019, average business income of the self-employed fell. 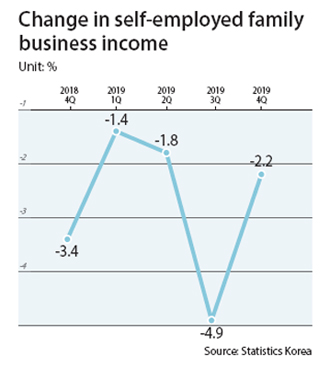 This is the longest losing streak for these enterprises since the statistics were first compiled in 2003, even longer than the four down quarters recorded late 2014 to late 2015 during the Middle East respiratory syndrome outbreak.

“The poor business situation led to the decline of revenue for the self-employed,” said Eun Soon-hyun, a Statistics Korea official.

Free of tourists on Thursday morning, the deserted streets of Myeong-dong, central Seoul, attest to the troubles of these family-owned and -run businesses.

“The number of customers and revenue have decreased by half to as much as 90 percent at restaurants, traditional markets and general stores,” Choi Seung-jae, president of the Korea Federation of Micro Enterprise, said.

It’s been one hit after another. The coronavirus started spreading last month and has added to the troubles of small businesses struggling with higher rents and increased labor costs.

Tourism, travel and leisure activities are rapidly declining, various events have been canceled and people are reducing their activities as they work to protect themselves from infection.

“We are supposed to have more customers during the winter school break, but since the new coronavirus outbreak, we have had almost zero customers,” said the proprietor of a Korean restaurant. “The sluggish economy has reduced sales, the increased minimum wage has increased labor costs, the implementation of the 52-hour workweek system has reduced night customers coming for hoesik, a gathering among co-workers after work. And now here comes another crisis of the new coronavirus.”

Some businesses are getting desperate.

“We are no better than beggars,” a grocery store owner said to President Moon Jae-in when he was visiting a traditional market in Asan, South Chungcheong, in early February.

According to a survey by the Korea Federation of Micro Enterprise conducted from Feb. 13 to Feb. 19, 97.6 percent of small- and medium-sized enterprises owners said their sales have decreased since the new coronavirus outbreak.

Of those, 57.4 percent blamed “indefinite postponement and cancellation of various gatherings, events and trips,” while 22.6 percent said the cause was a “decrease in the number of people in the area according to the path of the infected.”

“Government policies for small- and medium-sized enterprises such as loan guarantees or tax support are not enough,” Choi said.

The self-employed are most worried that the situation will continue for a long period of time.

The Korea Federation of Micro Enterprise, an association representing seven million small merchants across the country, said that if the slowdown lasts beyond the first quarter to the second quarter, many stores will go out of business.

“Internet transactions and unmanned stores have become common since the new coronavirus outbreak,” said Jung Yeon-seung, vice president of Korea Distribution Association. “Non-face-to-face consumption habits and distribution methods are becoming more common, and it could hasten the pace of structural adjustment,” he added.

The government is responding. It has come up with comprehensive economic measures, including boosting investment and consumption, and will develop additional measures for self-employed and small- and medium-sized enterprises later this month.

“Help the self-employed and the restaurant industry through hoesik, since hoesik for morale promotion is not against the 52-hour workweek system,” Deputy Prime Minister Hong Nam-ki said. “The extension of parking permit hours around the traditional markets and the price ceiling of 500,000 won ($410) per month on purchases of ‘onnuri gift certificates,’ special gift certificates issued by the government to boost the country’s economy by vitalizing traditional markets, are under review.”