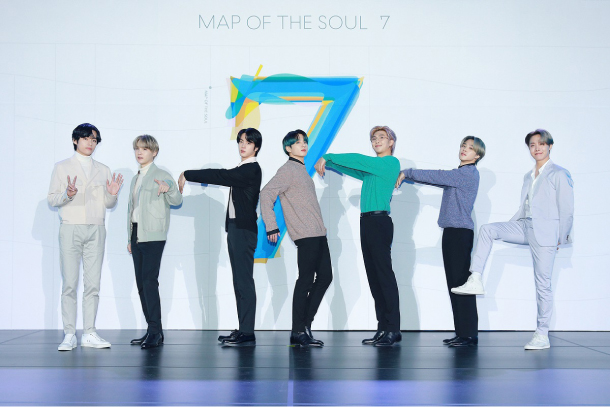 BTS held a press conference that was streamed live on YouTube on Monday afternoon to talk about its album, “Map of the Soul: 7.” From left are members V, Suga, Jin, Jungkook, RM, Jimin and J-Hope. [BIG HIT ENTERTAINMENT]

Seven people, seven years - if they hadn’t spent their time together, the members of BTS say that their lives wouldn’t make sense.

BTS dropped “Map of the Soul: 7,” its fourth full-length album on Friday, featuring a whopping 20 tracks comprised of 15 new songs and five hits from its previous album, “Map of the Soul: Persona.” The band held a press conference at Coex, southern Seoul, that was streamed live on YouTube on Monday afternoon due to the worsening coronavirus outbreak.

The group’s “Map of the Soul” album series is a follow-up to their “Love Yourself” series and comes from the perspective of looking deep within one’s self and asking questions like “who was I before,” “who am I now” and “where am I going?” According to Jin, “7” is the embodiment of the path they’ve taken together over the years.

“‘Map of the Soul: 7’ is an album that looks back at the seven years the seven members of BTS has had [together]” he said. “If ‘Love Yourself’ talked about the world we live in and how we look to the outside world, we wanted to show something different this time. So we express all the things we’ve experienced to become who we are now, the things we felt during that time. We expose the sides we wanted to hide, and at the same time, accept that this is who we really are.”

The album’s lead track “ON” stormed music charts all around the world immediately after its release, topping iTunes charts in a total of 91 regions across the world - the highest ever achieved by the group. It’s a surprise turn from the sugar-coated sweetness of the group’s hit 2019 song “Boy With Luv,” but the song’s strong beat and dark mood express how the group’s members felt while facing their deeper sides.

“Working on this album, I stayed up in the studio all night long, often on my own,” said RM. “While working on slower-tempo songs like ‘We Are Bulletproof: The Eternal’ and ‘Louder than Bombs,’ I often found myself crying. They reminded me of the past a lot. I think I’m still fighting. I’m still scared to show and express my weaker side, to face it. And looking back at the seven years, there were times when we didn’t know anything and we made mistakes as well as things we did well. I think a lot that we were lucky to make music, to dance, to talk at this press conference and meet with ARMY. This keeps our feet on the ground.”

For the new project, BTS wowed the world with something never tried by any other K-pop group - a worldwide art project featuring 22 artists and curators from around the world, held at five different exhibits in London, Berlin, Buenos Aires, Seoul and New York, under the title, “CONNECT, BTS.” Art and K-pop may seem distant, but not to BTS.

“I believe that contemporary art and music are two different languages that talk about the same values,” said RM. “They best convey the zeitgeist. They’re basically two aesthetically different languages that connect and communicate with people. When we drop new music, we have to physically be in the same place at the same time. We can’t be at Buenos Aires, London and New York at the same time. So we borrowed from the power of public art to open up a festival where people can enjoy our music together.”

Speaking of language, “Parasite” director Bong Joon-ho praised BTS at this year’s Golden Globes, saying, “The power and influence of BTS is 3,000 times stronger than mine” while answering a question about his thoughts on the growth of Korean culture globally.

“Honestly, I’m embarrassed,” said Suga. “I’m a personal fan of director Bong. We’re still not sure if we are as influential as he said we are. I think there’s a lot to go. But I think he was saying that Korea is such a dynamic country, with so many amazing artists.”

RM added, “We’re just grateful to be asked these questions, on why we think we’re loved so much. How did we manage to attract such a diverse pool of fans? I think this is a time where the most personal things are the most universal. The things we think about aren’t just Korean - they ring true with people our age all around the world.”

The group added another accomplishment to their long list of firsts when they became the first K-pop act to perform at the Grammy Awards this year. If “Map of the Soul: 7” is able to top the Billboard 200 chart again, they will become the first band since The Beatles to have four albums reach No. 1 on the chart.

Do they feel the pressure? Yes, but that doesn’t mean they’re going to stop.

“I think now, our purpose matters more than our goals, and our achievements matter more than the records,” said Suga.

“If we can keep doing what we do and enjoy ourselves while doing it, then I think it will naturally progress into good results.”

Jimin added, “Just as music from other artists is listened to for decades, if our songs are listened to by people and if it still heals people and makes them happy, that will be the best asset we will ever have.”