Businesses do their bits to help with the crisis

Businesses do their bits to help with the crisis 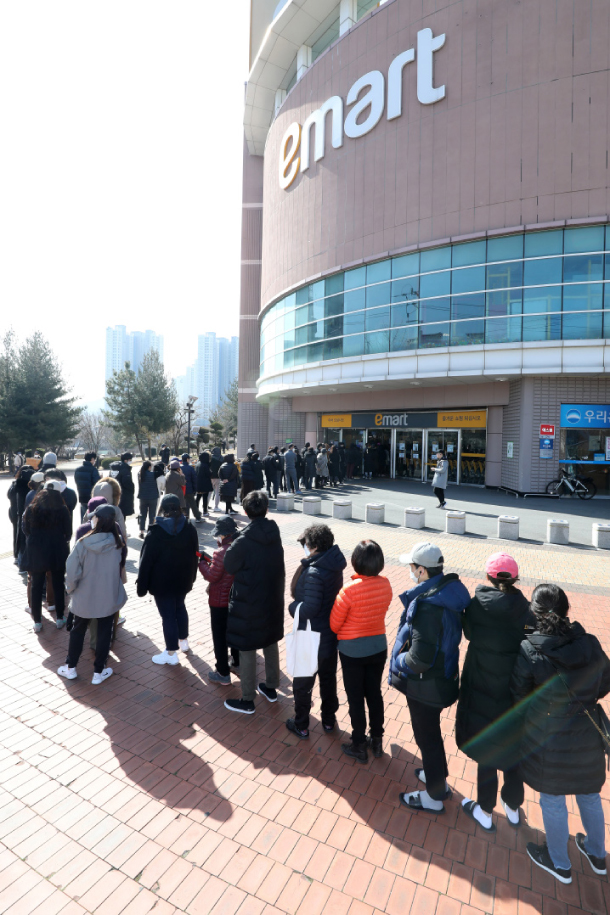 People wait in line to buy face masks Monday morning in front of an Emart store in Gyeongsan, a city near Daegu in North Gyeongsang. [NEWS1]

As the coronavirus crisis continues, Korean companies are trying to help in various ways, like hurrying along supplies of face masks or making attempts to stimulate the economy.

Supermarket chain Emart secured 2.21 million Korea Filter face masks and sent all of them to Daegu and North Gyeongsang, the center of coronavirus infections in Korea.

More than 20,000 face masks disappeared from the shelves of Emart’s six branches in Daegu on Feb. 19 and 20.

“After a discussion with the Ministry of Food and Drug Safety, we decided the two regions should receive our emergency mask supply,” said an Emart spokesman.

The supply was provided by a domestic mask company. Emart will sell these products at a 45 percent discount.

Of the 2.21 million masks, 1.41 million will be sold at six Emarts in Daegu, one Emart in Gyeongsan, North Gyeongsang, and one Emart Traders in Gumi, North Gyeongsang. Each customer will be allowed to purchase up to 30 masks. The remaining 700,000 masks were sold to the Daegu city government, which plans to distribute them to low-income families and old people. Emart donated 100,000 masks to the city government free of charge.

According to local news outlets, Emart’s Daegu stores had people queuing up from as early as 8 a.m. Monday, two hours ahead of the opening hour after the chain announced they would be selling masks.

The state-owned Korea Land and Housing Corporation (LH), which is involved in the development of land in the country, announced Monday that it would open tenders on 20 trillion won ($16.4 billion) worth of projects this year. This is double the amount of last year and the biggest annual budget the company has ever set.

Specifically, 16.2 trillion won of projects will involve housing developments, and the remaining 4.3 trillion won will involve development of 22.6 square kilometers (8.7 square miles) of land, the company said. Setting aside the costs of landscaping and electricity and telecommunications infrastructure, around 80 percent of the 20 trillion won will be spent on civil engineering and construction, which produces many jobs.

In a statement, LH explained it wants to boost an economy slowed by the coronavirus crisis.

Some companies are offering help through financial support.