Assembly has to cancel a session due to coronavirus

Assembly has to cancel a session due to coronavirus 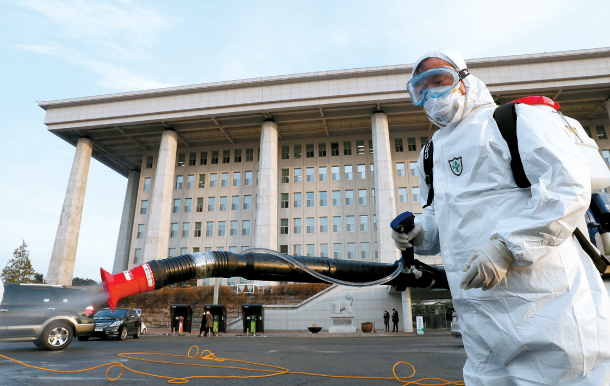 Quarantine officials disinfect the compound and buildings of the National Assembly on Monday. The buildings were shut down from 6 p.m. on Monday through 9 a.m. on Wednesday. [LIM HYUN-DONG]

The National Assembly canceled its session Monday after the floor leader of the main opposition party had contact with a confirmed coronavirus patient.

The abrupt decision to cancel the session was made after Rep. Shim Jae-cheol, the floor leader of the United Future Party (UFP), took a test in the morning for a possible infection. He had contact with an infected person at a seminar on Wednesday.

Lawmakers were scheduled to hold a voting session at 2 p.m. to vote on Monday on several bills including the formation of a special committee to counter the coronavirus outbreak.

The ruling Democratic Party (DP) and the main opposition UFP agreed to reschedule the session.

On Wednesday, Shim attended a seminar on the Moon Jae-in administration’s policy on private education foundations in the main conference room of the National Assembly’s Members’ Office Building. Also attending was Ha Yun-su, president of the Korean Federation of Teachers’ Association, who was confirmed infected on Saturday night.

All facilities inside the National Assembly were also closed for disinfection. The buildings were shut down from 6 p.m. on Monday till 9 a.m. on Wednesday.

“We will cooperate with emergency fiscal spending measures including the supplementary budget plan,” said Hwang. “The ruling party must act quickly.”

Hwang also urged fellow conservatives to stop holding antigovernment rallies during the outbreak. “The people are concerned about a recent mass rally,” said Hwang. “I understand why you want to hold a protest, but now is a time to concentrate on safety. I ask you to refrain from holding any rally.”

Later in the day, Hwang canceled all planned meetings, including campaign activities in Jongno District, central Seoul, to take a coronavirus test since he sat next to Shim at the morning leadership meeting.

Chairman of the ruling DP Lee Hae-chan said Monday the party temporarily stopped face-to-face campaign activities for the April general elections. During a leadership meeting in the morning, he apologized to the public for the rapid surge in infections.

“The DP will stop all face-to-face campaign activities for one week,” Lee said. “The people’s health is far more important than elections.”

Lee and other DP leaders continued to blame the Christian sect known as Shincheonji for the rapid spread of the virus. “We will come up with stern measures against the believers of Shincheonji and its churches, the epicenter of the outbreak [in Korea],” Lee said.

Rep. Park Kwang-on, a member of the DP Supreme Council, also blamed the religion. “The situation was completely different before and after the Shincheonji believers’ mass infections,” he said. “We need to talk about powerful measures against Shincheonji members and facilities. Shincheonji said it is the biggest victim of the outbreak, which is far from the people’s sentiment. In order to reduce further damage, it must completely obey the authorities.”

As the outbreak spread nationwide, some politicians started wondering aloud if the April 15 general elections should be postponed. Sohn Hak-kyu, head of the Bareunmirae Party, first proposed a delay on Friday and reiterated it Monday.

Rep. You Sung-yop, floor leader of a new political group mainly representing South and North Jeolla and Gwangju, also said Monday that politicians may need to consider postponing the general elections. “We need to see how the outbreak unfolds this week and seriously consider the possibility,” he said.

Hong Joon-pyo, former chairman of the LKP, posted a message on Facebook. “The outbreak is growing into a national catastrophe,” said Hong. “I wonder if the election can take place as planned without a delay.” Some politicians said it is premature to discuss a postponement. “We held an election during the Korean War. Even if the turnout will be low, we need to hold an election,” Rep. Park Jie-won said in a KBS radio interview.

There has been no precedent for an election being postponed. During a 2009 flu pandemic, Korea recorded 700,000 cases and 263 deaths, but the Oct. 28, 2009, by-elections took place on schedule. The president has the right to postpone an election. “If it is impossible to hold an election or an election has not been held due to a natural disaster or terrestrial upheaval or for other unavoidable reasons, the president shall postpone the election in the case of the presidential election and an election of a National Assembly member,” reads Article 196 of the Public Official Election Act.

A Blue House official, however, said no discussion has taken place on a postponement. The National Election Commission said it has no legal authority to review a postponement. “It is a decision of the president,” the commission said. “We are reviewing countermeasures on holding votes and counting ballots amid the outbreak. What we can do is come up with such measures. We have no right to consider a postponement.”