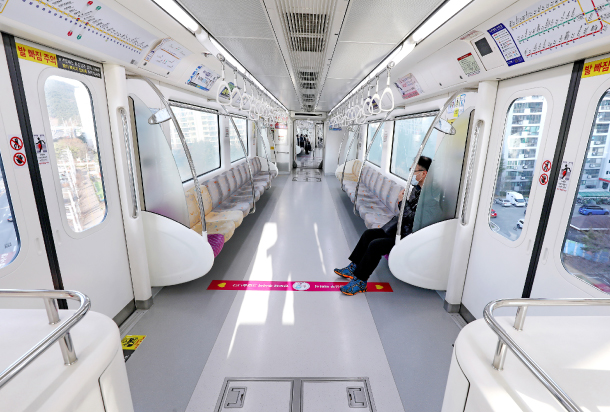 A monorail in Daegu is almost empty during rush hour Monday morning as residents of the city avoid taking public transportation for fear of catching the novel coronavirus. [NEWS1]

An eighth patient died of the new coronavirus as infections once again soared, reaching a total of 833 Monday, 231 more than on Sunday.

A coronavirus patient who was hospitalized at Kyungpook National University Hospital in Daegu died shortly past 4 p.m. Monday, health officials said. The patient was said to have been hospitalized at Daenam Hospital in Cheongdo County, North Gyeongsang, before testing positive for the virus.

Of Korea’s eight fatalities from the coronavirus, six were hospitalized at Daenam before contracting the disease, including a 59-year-old and 62-year-old man who died Sunday night.

As in the past few days, many of Korea’s latest infections Monday were traced to the Shincheonji church in Daegu - either adherents of the controversial Christian sect or people who came into contact with them - and Daenam Hospital.

Infections remain heavily concentrated in Daegu - which is the nation’s fourth-largest city - and the surrounding southeastern province of North Gyeongsang, with 681, or 81.8 percent of the total.

By Monday at 4 p.m., 22 people had been discharged from hospitals after full recoveries from the illness, four more than the day before, while most of the rest were in stable condition, said the KCDC.

Gimpo officials said Sunday night that a 16-month-old baby girl in the city appeared to have contracted the disease from her parents, becoming the youngest coronavirus patient in the nation.

It was the second known time in Korea that a person under the age of 10 was reported infected with the disease, which seems to be prevalent among the middle-aged. The other under-10 patient is a 4-year-old girl in Daegu, who apparently contracted the disease from a day care center teacher.

The KCDC said the 16-month-old and 4-year-old females were in stable condition Monday.

According to Gimpo officials Sunday, the infant and her parents - aged 32 and 33 - all went to a relative’s wedding at the Queenvell Hotel in Dong District, Daegu, on Feb. 15, where they stayed for about an hour and a half. The wedding was also attended by Patient No. 31, a Shincheonji churchgoer in Daegu.

The 32-year-old wife felt a cough and sore throat come on shortly after returning from the wedding and tested positive for the coronavirus last Friday, followed by her husband, who tested positive later the same day, Gimpo officials said. The 16-month-old daughter tested negative Sunday in her first test, but results came out positive on a second test later that day.

Officials in Busan, Korea’s second-largest city, said Monday nearly half of the city’s infections were traced to the Presbyterian Onchun Church in Dongnae District, stoking fears that the virus was spreading in a religious community as in the Daegu Shincheonji church.

A total of 50 infections were reported in Busan by Monday at 4 p.m., at least 22 of which were said to be traced to Onchun Church. When including another Onchun churchgoer in Gimhae, South Gyeongsang, who contracted the virus, a total of at least 23 infected people have connections with the church.

According to Busan officials, many of the infections related to the church were teens or young adults in their 20s who went to an overnight church camp on Feb. 15 and 16. Some 150 people were said to have attended the camp.

The church closed all its facilities last Saturday and said it would reopen in two weeks, the incubation period of the coronavirus.

Asiad Hospital, a hospital for the elderly in Yeonje District, Busan, was placed under so-called cohort isolation Monday morning after a 56-year-old woman who works there tested positive for the coronavirus Sunday. Cohort isolation refers to the shutdown of an entire medical institution to prevent the spread of a contagious disease.

There are 193 patients at the hospital and about 100 workers, Busan officials said. The hospital will reopen after the 14-day incubation period on March 7.

The 56-year-old woman was said to have connections to Shincheonji, though it was unclear whether she was a churchgoer or had contact with one.

Among Deagu’s latest infections, one was identified as the head of the Daegu Seo District public health office’s infectious disease prevention team - who was a Shincheonji adherent. Daegu Mayor Kwon Young-jin said in a press conference Monday morning that it was only after the public official tested positive for the virus Sunday that he told his colleagues he goes to the Daegu Shincheonji church. Some 50 workers at the public health office were subsequently ordered to quarantine themselves in their homes for the next two weeks, Kwon said.

In Seoul, where 29 coronavirus patients have been confirmed so far, the city announced Monday it ordered some 5,700 day care centers to close for two weeks; set up a children-only coronavirus checkup zone at two hospitals; temporarily shut down several public facilities including libraries, museums and stadiums; and advised 70 percent of the workforce at Seoul City Hall to shift their work hours from 9 a.m.-6 p.m. to 10 a.m.-7 p.m. to reduce commuting risks.

The Seoul Metropolitan Government said in a statement that the city has decided to accept severe coronavirus patients from other areas of the country to help with medical treatment and offer medical equipment to Daegu and North Gyeongsang.

Seoul Mayor Park Won-soon said Monday that Shincheonji was refusing to provide a full list of its worshippers living in Seoul, adding that its uncooperative behavior was preventing Seoul officials from contacting them and asking about their symptoms.

If Shincheonji continues to refuse, Park floated the option of asking the police to raid their offices.

The National Court Administration advised courts nationwide Monday to adjourn all cases for the time being unless they were urgent matters.

The United States Forces Korea (USFK) announced Monday afternoon in a statement that it was told by the KCDC “a USFK dependent” living in Daegu tested positive for the coronavirus, marking the first time a USFK-related individual has contracted the disease.

“The patient, a 61-year-old female, visited Camp Walker’s post exchange on Feb. 12 and 15, and KCDC and USFK health professionals are actively conducting contact tracing to determine whether any others may have been exposed,” said the USFK.

“The USFK encourages all personnel to continue to practice strict proper hygiene procedures as the best ways to prevent the spread of viruses and protect the USFK population.”