Korea’s consumer confidence dropped dramatically in February, although it only reflected the new coronavirus’s spread prior to the explosion of cases last week.

The country’s Composite Consumer Sentiment Index registered a 7.3-point decline, according to results released by the Bank of Korea on Monday. The 2,200 surveyed households averaged a score of 96.9, the lowest point since last August. 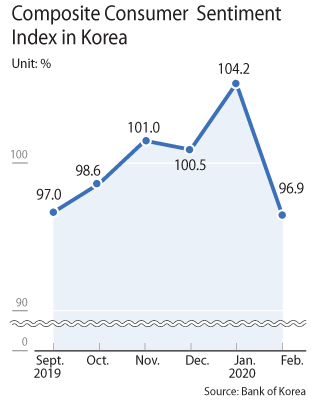 It was surpassed only by single-month drops following the March 2011 Japanese earthquake and tsunami and the October 2008 survey after the beginning of the global financial crisis.

The drop was the third-largest in a single month since the surveys began in 2008.

The index measures the level of consumer confidence based on six indicators. Results above 100 indicate consumers’ optimism in the economy, while results below 100 indicate pessimism.

The surveys took place between Feb. 10 and Feb. 17, meaning that Korea’s total confirmed cases of the coronavirus were still well below 50 at the time. Following the staggering increase in confirmed patients last week, the total had risen to nearly 1,000 as of Tuesday evening.

“The consumer sentiment is expected to fall additionally in March as the number of infected patients skyrocketed by the end of February,” said Oh Jae-young, an analyst at KB Securities. “Even if the new confirmed cases start to dwindle in March, it will take about five to six months until the consumer sentiment fully recovers, when analyzing similar cases in the past. It means that slow growth in the service sector will extend until the second quarter.”

Other indicators have pointed to a similarly dark economic future. The Kospi’s rally on Tuesday failed to erase three straight sessions of losses, including Monday’s plunge of nearly 4 percent.

Korea’s confirmed cases of the virus had climbed to nearly 1,000 as of Tuesday evening, according to the Korean Centers for Disease Control and Prevention.