Stuck at home? New TV shows aim to entertain: As outbreak continues to grow, networks are rolling out programs via live stream

Stuck at home? New TV shows aim to entertain: As outbreak continues to grow, networks are rolling out programs via live stream 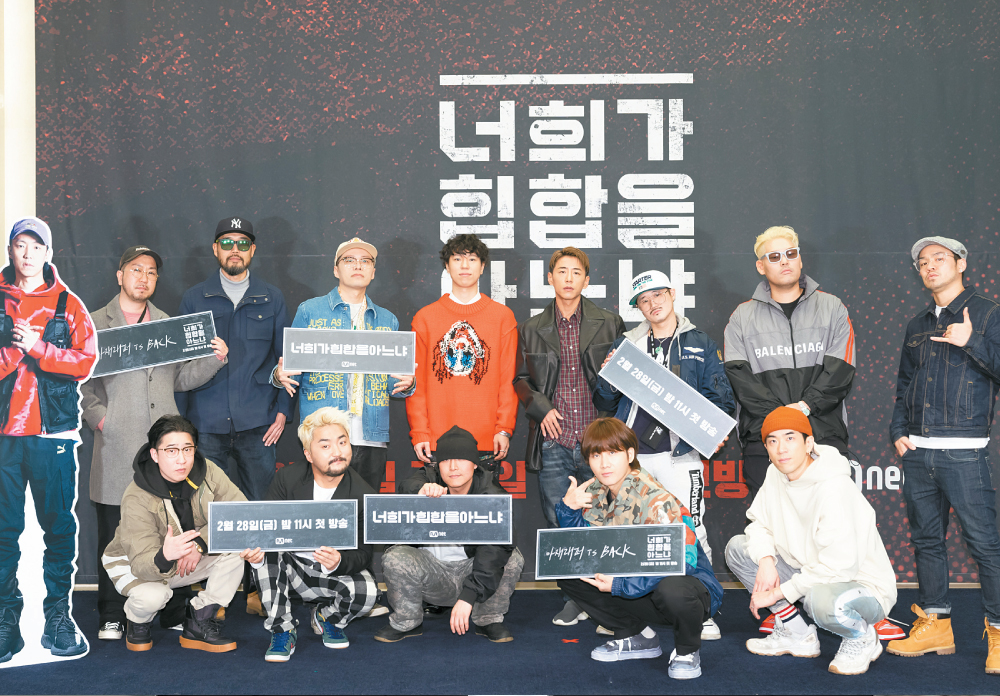 First-generation hip-hop stars and hosts Yoo Byung-jae and Lee Yong-jin of the upcoming Mnet show “Do You Know Hip Hop” pose for pictures after an online press conference on Tuesday. The show premieres on Friday at 11 p.m. [MNET]

While coronavirus is delaying or canceling scheduled concerts, theater performances, art exhibition openings and more, television programs will probably be the only cultural getaway people can depend on for the next few weeks as most choose to stay home to stay safe.

Eager to introduce and promote new programs that will hit the air soon, producers are scrambling to hold live press conferences online.

One such show is Mnet’s “Do You Know Hip Hop,” which kicks off this Friday. The program, which the channel prepared in earnest to move away from the “Produce” series vote-rigging scandal, features an array of rappers who haven’t been in the limelight for a few years, including Double K, Baechigi, Onesun, 45RPM, Honey Family, Yankie, Infinite Flow and Juseok. Instead of pitting the rappers against each other, “Do You Know Hip Hop” will give the rappers a series of missions that will eventually lead to making their own compilation albums and hosting performances for old-school hip-hop fans to enjoy.

The rappers featured on the show opened the doors for Korean hip-hop to become a part of mainstream culture and were popular in the late 1990s to early 2000s. The majority of them have remained out of the entertainment industry for years, and have been working behind the scenes, like rapper Yankie, who is famously known to have worked with K-pop superstar BTS. Some have shied away from the industry entirely, like Young Poong of the hip-hop collective Honey Family, who now works as an entrepreneur running his own company.

“Mnet has produced a lot of hip-hop related programs such as ‘Show Me the Money,’ ‘Unpretty Rapstar,’ ‘High School Rapper’ and more, but this program will have viewers recall their old memories,” said producer Hwang Sung-ho. “Our strong points are that the participants have loved hip-hop for decades. You can’t ignore years of experience when you’re performing on stage.”

“One of our goals is to show that we are not old, but that we’re classic,” said comedian Yoo Byung-jae, who is hosting the show alongside comedian Lee Yong-jin.

Although the program’s main goal on the surface is to put together a compilation album, producer Hwang hopes that the “12 legendary figures of hip-hop” will be born again through the program.

“Do You Know Hip Hop” is one of many new shows taking safety measures while promoting the show due to the escalating number of confirmed coronavirus cases. Beginning with tvN’s “The Cursed,” which debuted on Feb. 10, all of the drama series that have premiered in the last two weeks have hosted the press events online. Press conference organizers collect questions from reporters in advance and have those in attention answer them via live stream.

For television channels, the press conferences held before their new shows hit the air are important and act as a preview for viewers curious to know what the shows are going to be about.

However, some have criticized the format because reporters can no longer ask questions on the spot, which some say leads to a dry question and answer session that doesn’t allow for follow-up questions.

Still, as the number of confirmed patients grows quickly, networks say they plan on continuing to host press events online until the outbreak slows down. The upcoming SBS drama series “Nobody Knows,” scheduled to premiere on March 2, will hold a live stream press event today at 2 p.m.

The hit JTBC drama “Itaewon Class” is scheduled to host an online press conference at 2 p.m. on Friday for the actors to give viewers a behind-the-scenes look at the show.