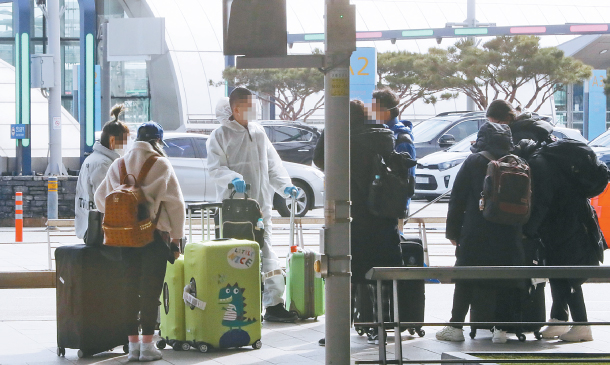 Chinese students at Incheon International Airport wait Tuesday for buses to take them back to school. [YONHAP]

As part of its efforts to minimize further spread of the new coronavirus, the Korean government announced Tuesday it will allocate 4.3 billion won ($3.5 million) to assist Chinese college students arriving in Korea for the new semester.

The Ministry of Economy and Finance’s announcement is just the latest of a steady drumbeat of measures from the government over the past week, as the virus has rapidly expanded its footprint in Korea. The epidemic originated in Wuhan, China, and the neighboring country accounts for the vast majority of global cases of the deadly virus.

“In cooperation with universities and central and local governments, the country will provide human resources and sanitary products that are needed on-site to manage the Chinese students,” said Park Ho-seong, a Finance Ministry official in charge of the education budget.

International students from China have emerged as a new potential vector for the coronavirus in Korea. The Ministry of Education estimated only 10,000 Chinese students will come to Korea this week, out of the 70,000 registered for classes in Korea.

Chinese students will be closely monitored for 14 days upon their arrival in Korea, and many will face quarantine for at least that amount of time, depending on where they traveled in China.

The reserve fund will be used to help students who haven’t yet found residences by providing temporary housing, as well as sterilizing the locations. The government will also pay for the cost of students’ transportation from the airport to their residences.

Up to 300 million won will be used to purchase hygienic products, including face masks, hand sanitizer and thermometers, for the students. And the Finance Ministry said it will spend 200 million won to install informational booths at Incheon International Airport to provide guidance to Chinese students on how to minimize their likelihood of spreading the virus further in Korea. Masks will be provided for free.

The Education Ministry is insisting that students use dorms as their residence upon their return, instead of finding separate housing outside of school. Korean universities, however, lack sufficient dormitory rooms to accommodate all of the students due to arrive from China. Among the top 10 Korean universities in terms of the number of Chinese students, available housing can accommodate just 17.5 percent of those students on average, according to the ministry.

“Students in dormitories can be controlled by the university, but what’s more of a problem is those who live outside of the school,” said Kim Woo-joo, an infectious disease doctor at Korea University Guro Hospital. “Those who live on their own have to be monitored by the local government. The students need to submit a sort of medical report from the moment they arrive in Korea.”

The Ministry of Finance also said the cabinet allocated 900 million won to sterilize examination sites for civil service exams, which are scheduled in February and March.