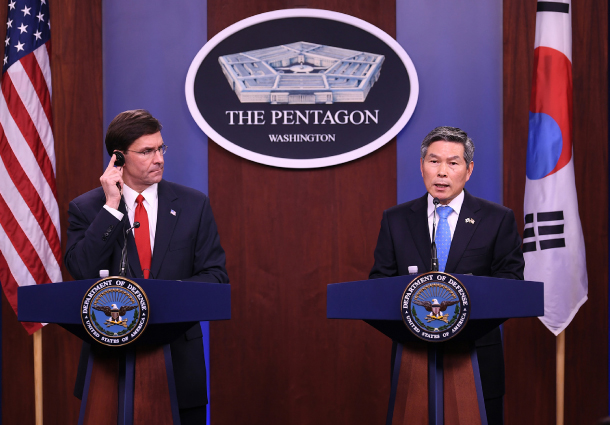 The defense chiefs of Korea and the United States presented broadly different accounts on the issue of military cost sharing at a joint press conference Monday, exposing ever-wide differences between the two sides as they continue negotiations over the upkeep for U.S. troops stationed in Korea.

Standing alongside Korean Minister of National Defense Jeong Kyeong-doo in a briefing room at the Pentagon, U.S. Secretary of Defense Mark Esper began his statement by affirming the two countries’ decades-long military alliance but soon segued into what he described as an unequitable cost-sharing arrangement.

“Shouldering the cost of the common defense cannot fall disproportionately to the American taxpayer,” Esper said, echoing the narrative often used by his boss, U.S. President Donald Trump, to characterize U.S. military commitments around the globe.

“As such, we must find a more sustainable and equitable means of sharing the costs of our combined defense with the Republic of Korea.”

Noting that inducing its allies to pay a larger burden in defense costs is a “top priority” for the United States, Esper stressed that Korea “can and should contribute more to its defense” on par with its status as a “global economic powerhouse.”

Since last year the two countries have been in negotiations over the Special Measures Agreement (SMA), the annually renewed arrangement that determines Korea’s contributions to the non-personnel costs related to the 28,500 U.S. troops stationed on its soil.

No compromise has yet been reached on an agreement as negotiators are at loggerheads over the Trump administration’s demand that Seoul pay about five times more than last year’s payment of $930 million.

Jeong, however, did not back down from plainly voicing Korea’s opposition to such a massive hike.

“Our government is contributing [to the alliance] in various ways other than upkeep for the U.S. Forces Korea [USFK] and has increased our national defense spending to $43 billion this year,” Jeong said in an apparent reference to Seoul’s recent acquisitions of U.S.-made military equipment and weapons.

“With this, we will elevate the Korean armed forces’ key military capacities and the quality of our allied defense structure.”

As to the ongoing SMA talks, Jeong said Korea was proceeding with discussions with the expectation that it would have to pay more than its share last year but that “there is a clear difference in understanding about the massive increase requested by the United States.”

Disagreements were again made apparent when Jeong brought up the USFK’s decision to furlough around 9,200 Korean employees working on U.S. bases in Korea, a measure seen as an attempt to apply pressure on the Korean government.

“Currently USFK Commander Gen. Robert Abrams has issued notices of a potential furlough without pay to Korean workers starting from April 1 based on legal procedures,” Jeong said. “As defense minister, it is my responsibility to guarantee stable conditions for the USFK’s stationing and maintain a firm allied defense posture.

“No other factor must influence this responsibility,” he added.

Notably departing from protocol, Jeong brought up contents of his talks with Esper earlier that day, saying he had asked the secretary to prevent a situation where Korean workers would be furloughed without pay. Seoul is willing to agree to a conditional deal to allow the USFK to receive administrative funding equivalent to last year’s SMA, with the increase for this year to be negotiated going forward, Jeong said.

Esper, however, did not budge from Washington’s position on the matter, saying the USFK would begin to furlough its Korean workers starting April if no deal was reached by late March.