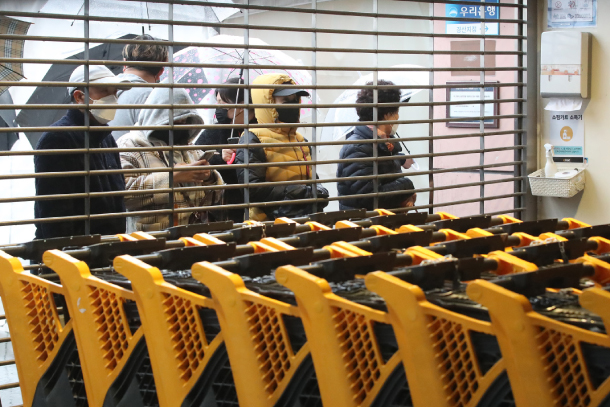 The government is allowed to control supply and demand of goods “when the stability of the people’s livelihoods and smooth operation of the national economy are feared to be endangered considerably due to rapid price increases and commodity shortages,” according to Article 6 of the Price Stabilization Act.

“We are expanding the measures to surgical face masks as demand from medical facilities is skyrocketing,” said Food and Drug Safety Minister Lee Eui-kyung. “We will make sure that medical institutions do not experience a shortage of face masks.”

The measures will be operative until April 30.

“We will crack down on any violations,” said Lee. Violators of the emergency measures will face up to two years in prison and fines of up to 50 million won ($41,000).

The government said it will supply more face masks to Daegu and Cheongdo County of North Gyeongsang, where infections have spiked.

When President Moon Jae-in held a meeting at the Blue House on Monday, experts in infectious diseases offered recommendations on issues like protective gear.

“We are reusing face masks because even medical institutions do not have enough protective gear,” Kim Seong-ran, president of the Korean Association of Infection Control Nurses, told Moon during the meeting.

Some regional governments are sending face masks to sister cities in China, which is stirring controversy.

According to regional governments on Monday, the Ministry of Foreign Affairs is helping. Local governments are using their own budgets to purchase masks and medical gloves, while the Foreign Ministry and the Korea International Cooperation Agency are paying for shipping.

South Chungcheong said it will send 10,000 medical-grade masks each to 13 provinces in China. It spent 130 million won to purchase the 130,000 face masks.

“We know the public doesn’t approve, but we have to send them because we started the project one month ago,” said a South Chungcheong official. “We need to consider relations of trust with the Chinese provincial governments.”

Gangwon is sending 300,000 face masks to China. According to the provincial government, 210,000 masks were to be sent to Jilin Province, 60,000 to Beijing and 30,000 to Changsha. Shipments to Jilin Province and Changsha were sent earlier this month, and the shipment to Beijing will be sent before the end of this month.

“The masks were produced in the province,” said a Gangwon official. “We spent 140 million won on the project. We need to keep our promise because it is a matter of trust.”

The Seoul and Busan metropolitan governments said they also promised to send masks to China. Seoul allocated 400 million won and Busan 300 million won for the assistance, but they said they have not decided when to start shipments.

Some provinces and cities refused to make public information on face mask donations to China to avoid public criticism.