‘Containment’ of Daegu mulled by gov’t

‘Containment’ of Daegu mulled by gov’t 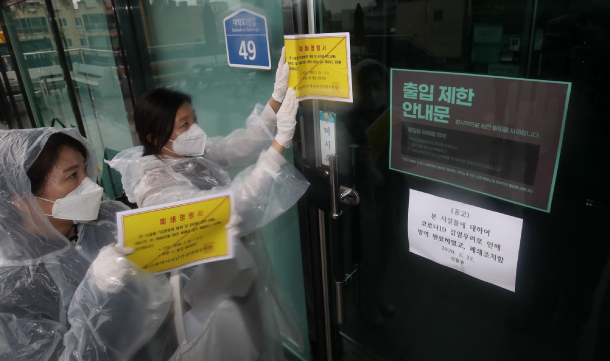 Korea is considering a “containment policy” for Daegu and North Gyeongsang to control the coronavirus outbreak, local officials announced Tuesday, stoking fears in the country’s southeastern regions that the area might be placed under a lockdown like Wuhan, China.

The fears came as infections hit 977 Tuesday afternoon, 144 more than the day before, according to data from the Korea Centers for Disease Control and Prevention (KCDC). The death toll stood at 11, three more than Monday.

As in the past few days, most of Korea’s latest infections Tuesday were traced to Daegu and the surrounding province of North Gyeongsang.

Among Korea’s three fatalities reported Tuesday was a 35-year-old male Mongolian national, marking the first time in the country that a non-Korean coronavirus patient has died.

According to officials in Namyangju, Gyeonggi, where he lived, and Myongji Hospital in Goyang, Gyeonggi, where he was hospitalized, the Mongolian was suffering from a chronic liver disease and renal failure when the illnesses worsened Monday and he was carried to the hospital by ambulance. He tested positive for the coronavirus later Monday.

The ninth was identified as a 68-year-old woman who was hospitalized at Kyungpook National University Chilgok Hospital in Daegu. She died Monday and was posthumously confirmed a coronavirus patient Tuesday morning.

KCDC officials believe she contacted a coronavirus patient linked to the Shincheonji church in Daegu. At least 501 patients have been traced to the church by Tuesday 9 a.m. 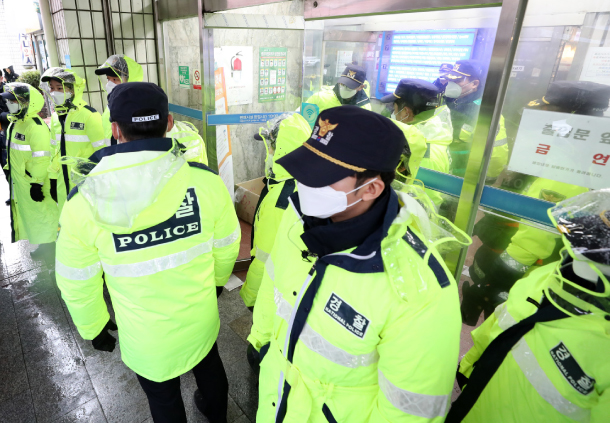 Police officers in Gwacheon, Gyeonggi, guard the entrance of a building housing the Shincheonji religion’s headquarters as Gyeonggi government officials arrived to confiscate a list of over 40,000 Shincheonji worshippers in the province. [NEWS1]

How the patients were infected there is still a mystery. Shincheonji is a controversial Christian sect known to have over 200,000 believers nationwide, 9,000 listed with the Daegu church.

The 10th fatality, according to the KCDC, was a 58-year-old man traced to Daenam Hospital in Cheongdo County, North Gyeongsang.

At least 113 coronavirus patients have been traced to Daenam Hospital, so far the second-largest group of infections after the Shincheonji church. Health officials are investigating the connection between the two groups.

By Tuesday 4 p.m., 22 coronavirus patients in Korea out of 977 had been discharged from hospitals after full recoveries, while the rest were mostly in stable condition. The KCDC said earlier Tuesday afternoon that six were in critical condition.

After a meeting of senior members of the ruling Democratic Party (DP), government and Blue House Tuesday morning, DP senior spokesman Rep. Hong Ihk-pyo told reporters in a press briefing that authorities have agreed to “maximize containment policies” in regard to Daegu and North Gyeongsang to curb transmissions as much as possible.

Asked what he meant by containment measures, Hong replied that authorities were “reviewing the use of certain administrative authority” to restrict people’s “movements,” saying further details will be revealed in coming days after a cabinet meeting.

Shortly after local media outlets started going to town with reports that the government may impose a virtual lockdown on the Daegu and North Gyeongsang areas, the DP explained in a text message to reporters that Hong was not referring to a lockdown and that he meant authorities would “tighten the quarantine system” to stop the spread of the virus among local communities.

The party continued that Hong “did not mean” the government would restrain members of the public from entering and leaving Daegu and North Gyeongsang, which have a combined population of about 5.2 million.

Later Tuesday after the DP’s text message to reporters, Blue House spokesman Kang Min-seok said in a statement that President Moon Jae-in “ordered” him to tell the press that Hong’s expression of maximized containment policies did not mean the government was considering a lockdown and that it meant authorities would try to contain the outbreak as much as possible.

As authorities continue to investigate how the coronavirus penetrated the Shincheonji community in Daegu, North Gyeongsang officials announced Tuesday that 22 people at a welfare center for people with severe disabilities in Chilgok County were infected.

The person suspected to have brought the virus to the so-called Milal House of Love, according to North Gyeongsang officials, is the mother of a 40-year-old man receiving care at the facility. The mother, a Shincheonji worshipper in Daegu, was said to have recently visited her son before testing positive for the coronavirus on Feb. 19. The 40-year-old has since been quarantined at his mother’s house in Daegu, and recent test results turned out negative.

But a 46-year-old at the facility tested positive Sunday, and since then, at least 21 others have been confirmed. A total of 69 people were known to be at the facility, including patients with disabilities and workers.

In Gangdong District, eastern Seoul, a pastor at Myungsung Church, one of the largest Presbyterian churches in the nation, tested positive for the coronavirus Tuesday morning after returning from a funeral at Daenam Hospital earlier this month.

Gangdong officials said the pastor and five other devotees traveled to Daenam Hospital on Feb. 14 to attend the funeral of another devotee’s relative. They all returned to Seoul that same day.

Upon hearing about the outbreak at Daenam Hospital, the group decided to go through a virus test, and results turned out positive for the pastor Tuesday. Myungsung Church said the pastor attended a service at the church last Sunday afternoon, which was attended by about 2,000 adherents. The church closed Tuesday and said it would cancel all services for the week.

Daenam Hospital was where a funeral service for the older brother of the Shincheonji church’s leader, Lee Man-hee, was held between Jan. 31 to Feb. 2. Many followers are believed to have attended the service.

As for Shincheonji, the KCDC said Tuesday morning that the government has reached an agreement with the sect to receive a full list of Shincheonji worshippers throughout Korea and will check in on every single one of them to ask about their symptoms of the coronavirus.

The KCDC said it believes there are around 215,000 believers across the nation, adding it would start testing churchgoers who reported symptoms of the virus and who came in contact with other worshippers in Daegu.