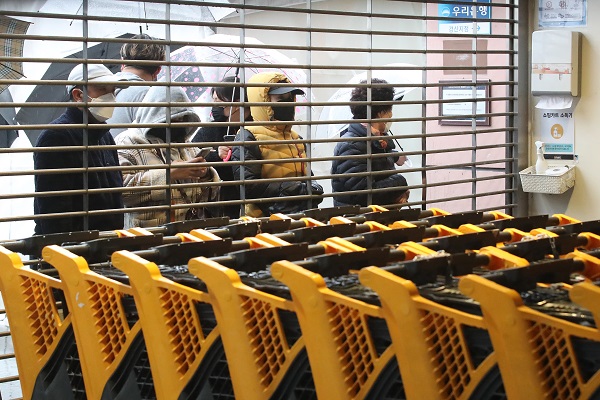 Korea is considering a “containment policy” for Daegu and North Gyeongsang to control the coronavirus outbreak, stoking fears in the country’s southeastern regions that the area might be placed under a lockdown resembling that of Wuhan, China.

The fears came as infections hit 893 Tuesday morning, 60 more than the day before, according to data from the Korea Centers for Disease Control and Prevention (KCDC). The death toll stood at nine, one more from Monday.

As in the past few days, most of Korea’s latest infections Tuesday were traced to Daegu and the surrounding province of North Gyeongsang.

The ninth patient to have died from the coronavirus has been identified as a 68-year-old woman who was hospitalized at Kyungpook National University Chilgok Hospital in Daegu. She died Monday and was posthumously confirmed a coronavirus patient Tuesday morning. It was not immediately known whether she had links to the Shincheonji religion’s church in Daegu or Daenam Hospital in Cheongdo County, North Gyeongsang, at which hundreds of people have contracted the disease. How the patients were infected there is still a mystery.

After a meeting of senior members of the ruling Democratic Party (DP), government and Blue House Tuesday morning to discuss the outbreak, DP senior spokesman Rep. Hong Ihk-pyo told reporters in a press briefing that authorities have agreed to “maximize containment policies” in regards to Daegu and North Gyeongsang to curb transmissions.

Asked what he meant by containment measures, Hong replied that authorities were “reviewing the use of certain administrative authority” to restrict people’s “movements,” saying further details will be revealed in the coming days after a Cabinet meeting.

Shortly after local media outlets started going to town with reports that the government may impose a virtual lockdown on the Daegu and North Gyeongsang area, the DP explained in a text message to reporters that Hong was not referring to a lockdown and that he meant authorities would “tighten the quarantine system” to stop the spread of the virus among local communities.