As patients multiply, so does the variety of apps

As patients multiply, so does the variety of apps 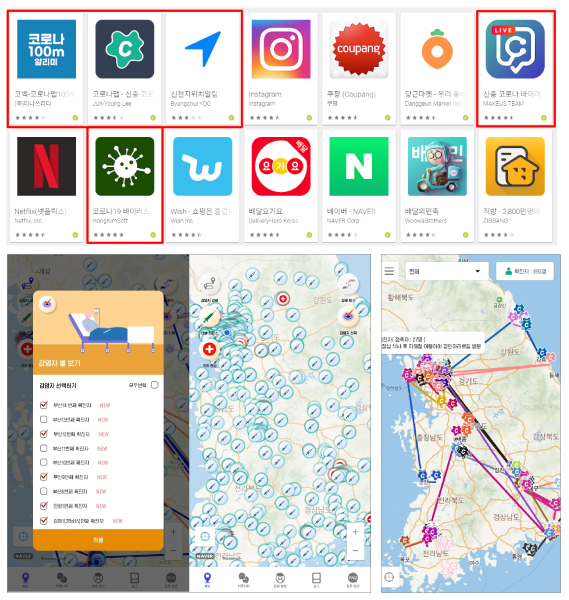 Mobile apps that map the distribution of the deadly coronavirus and track users’ proximity to infected patients’ footsteps were some of the most downloaded from the Google Play Store Wednesday, as the tally of confirmed cases continued to rise by more than 100 patients each day.

On Tuesday, the three top spots were occupied by location-tracking apps. Others published by public organizations were also popular.

The JoongAng Ilbo compared the pros and cons of the six most talked about apps related to the virus.

Launched on Feb. 11, the app Corona 100m sends an alert to users when they come within 100 meters (328 feet) of a location previously visited by a confirmed patient.

It was relatively well received, as users only need to wait for an alert instead of continually having to check the movement of confirmed patients.

The app started gaining popularity last week as the numbers of confirmed patients in Korea rose exponentially and was the most downloaded app in the Google Play Store for two consecutive days. It reached more than million downloads among Android users last Sunday. The app is not available for iPhone users.

Due to heavy traffic, some information, including the movements of confirmed patients and total number of patients, are unavailable on the app. Its developer TINA3D said Tuesday it’s working to stabilize the server.

“Some are spreading false rumors, saying we made the app for the government. Others who go overboard call us out as a voice-phishing app. We will track them down and take legal action,” a spokesperson for TINA3D said.

Corona Map was the second most downloaded mobile application among Android users on Wednesday. As the name implies, it marks in different colors the exact locations where each confirmed patient has been.

The only downside is that the app is a bit slow in keeping up with newly confirmed patients. The map had only updated the movements of 977 patients by noon on Wednesday, reflecting the previous day’s total and not the updated number of confirmed infections, which then stood at 1,146.

This app is unrelated to the virus-tracking website Coronamap.site, made by 27-year-old university student Lee Dong-hoon. It is not available for iPhone users.

Corona Doctor is the only app to receive a recommendation from the Google Play Store. It was ranked as the sixth most popular app among Android users.

Not only does the app track the movements and information of confirmed patients, but it also provides information on designated hospitals and quarantine locations. Users can select a specific patient and view his or her movements in detail.

It also has an anonymous bulletin and organized answers to questions on the virus frequently asked by the public.

The app also links to news articles on the virus but fails to keep users up to date with the most recent stories. The headlines provided are usually from two to three hours earlier.

The app is only available for Android users.

KMA Corona Fact was launched Feb. 5 by the Korean Medical Association, a trade union representing a majority of Korean doctors. It provides the number of confirmed patients, suspected patients and deaths from the coronavirus. The app connects users to an international repository of information on the outbreak, including websites like Baidu, for the number of confirmed patients in China, and the official website of the World Health Organization. Users can also read research papers on the coronavirus. Its downside is speed. The app is not available for iPhone users.

Emergency Ready App was created by the Ministry of Public Administration and Security and provides disaster and safety information. While not specifically designed in response to the coronavirus, the app allows users to view the previous movements of confirmed patients and receive alerts of newly confirmed patients.

This app created by the Ministry of Health and Welfare is only available to people flying from virus hot spots.

The disaster control headquarters since Feb. 12 has required those people to download the Self Diagnosis app to allow the government to react quickly to travelers carrying the virus.

Because many of the patients in Daegu are linked with the Shincheonji church, a controversial Christian sect, another app that purports to notify users of the previous locations of church members’ gained unexpected popularity.

The app was marketed to family members of church members and claimed the initial data were collected from the testimonials of those who were concerned about their family members’ involvement in the church.

But it attracted criticism for revealing the addresses of locations that had nothing to do with the church.

App developer Yoo Beong-chul on Wednesday apologized to those who have been affected by the inaccurate information.