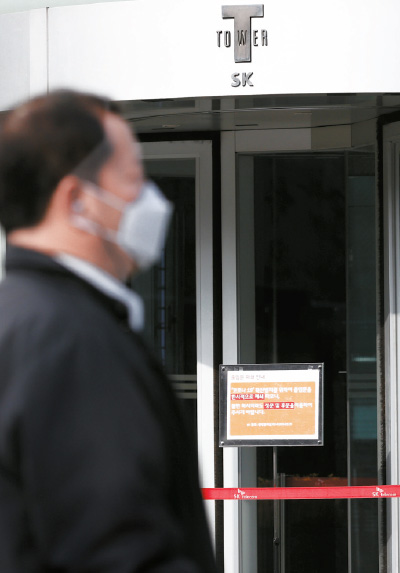 Another landmark of corporate Korea went into complete shutdown mode on Wednesday as an employee at SK Telecom’s headquarters tested positive from the coronavirus.

The incongruously bent T-Tower, which is located in Euljiro, central Seoul, will remain closed through the week, and employees from the building are required to work from home while the structure is being cleaned.

The lockdown comes just one day after LS Group closed its office building in Yongsan, central Seoul, and the neighboring Amorepacific buildings were also shut.

But the latest incident could have a bigger impact as the Euljiro area is one of the busiest business districts in the city, being home to major corporations such as Hana Bank, CJ Foodville and Daishin Securities.

SK Telecom said it would consider extending the measure through next week if the situation warrants.

It added that the employee in question is not related to Shincheonji, the religious sect disproportionately affected by the outbreak.

Around 4,000 SK Telecom employees work in the head office.

Two workers at the Korea Hydro & Nuclear Power, a state-run nuclear power plant operator, were also found to be infected with the virus on Wednesday, which led into the closure of its headquarters in Gyeongju, North Gyeongsang.

Essential workers were assembled to run the nuclear power plant in Wolseong, Gyeongju, while others worked from home. The remote work measures will be in place until next week.

As of press time, the nuclear plant was operating normally. Nuclear power plants generate about 30 percent of the country’s electricity.