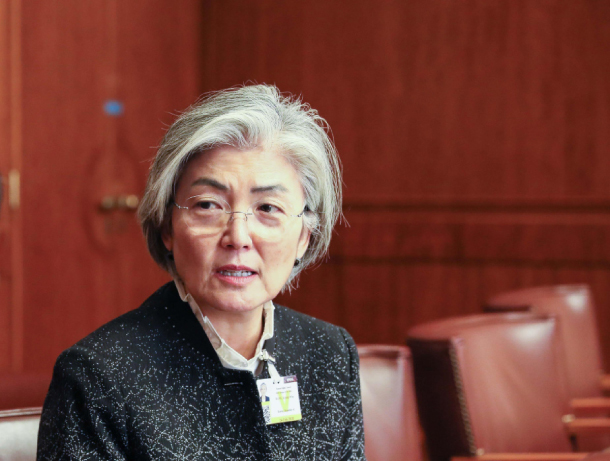 Chinese provinces and cities this week began barring travelers from Korea and quarantining visitors upon their arrival without prior notice as the number of Korean coronavirus cases exceeded 1,200 as of Wednesday.

When asked about the Chinese provincial government measures, Kang told reporters on the sidelines of a nuclear disarmament conference in Berlin Tuesday that her “initial assessment is that they are excessive.”

She noted, “We responded with considerable restraint regarding China, so we need to have communication so that China also correspondingly exercises restraint and does not respond excessively.”

Since Feb. 4, Korea has barred the entry of foreigners who had been in China’s Hubei Province in the 14 days prior to entering the country. However, Seoul stopped short of expanding the travel ban to the rest of mainland China despite many calls for such a ban. Over 78,000 of 81,000 confirmed cases were in mainland China, as of Wednesday, and over 2,600 deaths from the virus took place in Hubei Province alone.

Kang said that the Korean Ministry of Foreign Affairs is in communication with the Chinese Embassy in Seoul over the matter.

On Tuesday morning, airport authorities in Weihai, Shandong Province, quarantined over 160 passengers - including Korean and Chinese nationals - flying in from Incheon International Airport, the first such measure taken by China on travelers from Korea. They were put in a hotel in the city for 14 days.

Similar quarantine measures reportedly have been taken in other Chinese provincial cities including Shenyang in Liaoning Province and Nanjing in Jiangsu Province. Self-quarantine measures were also reportedly forced on travelers who had visited Korea by Beijing, China’s capital, and Shanghai, its business center.

On Wednesday, Japan announced an entry ban on foreign nationals who recently visited Daegu or North Gyeongsang’s Cheongdo County, where there are many infections. Tokyo is catching global flak for its handling of the quarantine process on the Diamond Princess cruise in Yokohama, Japan.

As of Wednesday, Seoul’s Foreign Ministry listed 16 other countries or territories as having imposed some form of entry ban on visitors from Korea: Nauru, Micronesia, Vietnam, Samoa, American Samoa, Solomon Islands, Singapore, Kiribati, Tuvalu, Hong Kong, Bahrain, Jordan, Iraq, Israel, Kuwait and Mauritius. Some dozen other countries or territories have tightened travel restrictions on visitors from Korea such as requiring some form of quarantine or medical check.

The United States and France are among countries that have urged their citizens to avoid nonessential travel to Korea. The U.S. Centers for Disease Control and Prevention on Monday raised its warning level to the highest, Level 3.

“We also imposed an entry ban on Wuhan and Hubei in the early stages, so we are not going to evaluate an individual country’s assessment,” Kang said in Berlin on countries that have imposed entry bans on Koreans. “However, our position is that it is difficult to accept a ban simply because someone is coming from Korea.”

She added that efforts are underway to communicate with governments to enable “prior consultation and coordination” to avoid unnecessary measures.

Kang last Saturday kicked off a six-day trip to Europe to attend international conferences, including the 43rd session of the UN Human Rights Council in Geneva and the Stockholm Initiative for Nuclear Disarmament and the Non-Proliferation Treaty (NPT) ministerial meeting in Berlin Tuesday.

Addressing the Human Rights Council in Geneva Monday, Kang said she was “deeply concerned about incidents of xenophobia and hatred, discriminatory immigration controls and arbitrary repatriation programs against individuals from the affected countries.”

As more countries are affected by the coronavirus outbreak, she noted that it is “crucial” for governments to “join forces in the global campaign to end it based on scientific evidence rather than taking action that would fan public panic.”

Kang used the international conferences and bilateral meetings with ministers and officials to explain Seoul’s approach to the outbreak, focused on “full transparency,” communication with the public and bolstering the capacity of disease control and medical facilities. Seoul has also been encouraging diplomatic dialogue and lodging protests about unfair restrictions against Koreans.

Xing, speaking to reporters at the Foreign Ministry Wednesday, asked for “understanding from the Korean people” while trying to draw a line between measures undertaken by the central government and provincial governments.

He noted that quarantine measures taken by provincial governments apply not only to Koreans but also to Chinese travelers.

Japan informed Korea of its entry ban in advanced, said the ministry.

Israel sent back a Korean Air flight Saturday before announcing an entry ban on Koreans, then sent back hundreds of Korean tourists on chartered planes Wednesday.

On Israel’s measures, Kang in an interview with Yonhap News Agency in Geneva Monday said that they were “excessive,” adding that “repatriating people who have already entered the country is different from just imposing entry restrictions.”

The Korean Foreign Ministry on Tuesday held a closed-door briefing of members of the diplomatic corps to explain the government’s attempts to curb the coronavirus outbreak.

In a press briefing in Washington on Tuesday, U.S. Secretary of State Mike Pompeo criticized China and Iran, another growing hot spot for the virus, for their handling of the outbreak, accusing both countries of a lack of transparency.

“Had China permitted its own and foreign journalists and medical personnel to speak and investigate freely, Chinese officials and other nations would have been far better prepared to address the challenge,” said Pompeo.