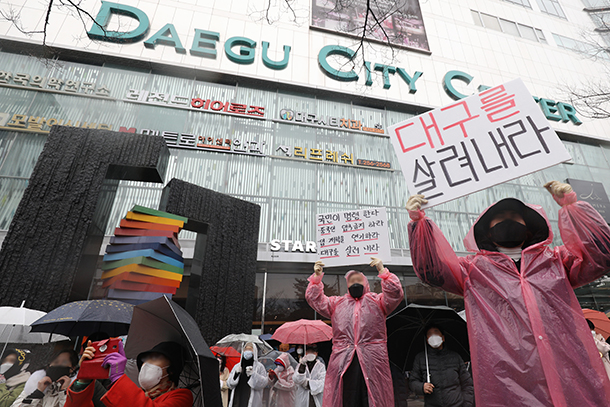 Members of conservative groups in Daegu picket on Tuesday to urge the Moon Jae-in government to rescue the city from the coronavirus outbreak. [NEWS1]

Korea’s coronavirus cases spiked to 1,146 Wednesday morning, up 169 from the day before and the first breach of the thousand mark. One more death was reported in Daegu, bringing total fatalities to 12.

Among the latest group of infected people was a U.S. soldier stationed at Camp Carroll in Chilgok County, North Gyeongsang, the first time a U.S. service member has tested positive for the virus.

The U.S. Forces Korea (USFK) said in a statement Wednesday morning that the patient, a 23-year-old male, is currently in self-quarantine at his off-base residence. He visited Camp Walker in Daegu on Monday, according to the USFK.

“KCDC [Korea Centers for Disease Control and Prevention] and USFK health professionals are actively conducting contact tracing to determine whether any others may have been exposed,” said the USFK.

Infections in Korea have been heavily concentrated in the southeastern Daegu and North Gyeonggsang areas, mostly traced to a church in Daegu of the Shincheonji religion and Daenam Hospital in Cheongdo County, North Gyeongsang.

Whether both outbreaks are related to each other is still a mystery, though the brother of Shincheonji leader Lee Man-hee was hospitalized there for five days late last month before he died. His funeral was held there, too, and Shincheonji adherents are known to have visited.

The latest patient in Korea to have died of the coronavirus was a 73-year-old man who was a Shincheonji worshipper in Daegu, the KCDC said. Health officials said the patient was hospitalized at Daegu Medical Center last Thursday and transferred to Keimyung University Dongsan Medical Center in Daegu on Sunday after his symptoms worsened.

He died on Wednesday morning at around 1 a.m.

By Wednesday at 9 a.m., 44 coronavirus patients have been tallied in Seoul, many from Jongno District, central Seoul.