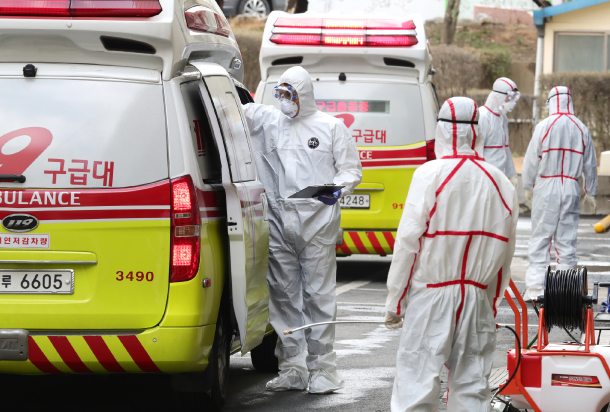 A Daegu doctor who threw himself in the front lines of the fight against the coronavirus epidemic Tuesday is asking for more volunteers.

On Tuesday morning, the phones of around 5,700 physicians and other medical experts in Daegu rang with a new message alert.

The text was sent by Lee Seong-gu, chairman of the Daegu Medical Association, pleading for help from his colleagues to provide medical assistance desperately needed by the city to combat the outbreak plaguing the city.

“Daegu is our home, where our beloved parents, siblings and children live out each of their days,” Lee wrote in his plea to members of the association, which regularly conducts medical volunteer work in the city. “That home has now been hit by an enormous medical disaster.”

As of Wednesday’s official count, Daegu had 710 confirmed coronavirus cases, but Daegu Mayor Kwon Young-jin claimed the real number of patients verified by city officials was even higher.

“Emergency rooms have been shut down and concerned people are flooding into coronavirus testing facilities, but there is a severe lack of medical personnel,” Lee said.

Though the central government has dispatched 101 military health officials to Daegu in order to assist with medical needs in the city, the mushrooming number of virus cases in recent days is stretching the city’s health resources to breaking point. City officials say they need at least 300 more doctors, nurses and epidemiology experts to properly face the crisis. Mayor Kwon also asked President Moon Jae-in, who visited Daegu Wednesday, for more medical personnel.

Knowing the extent of the crisis faced by the city, Lee asked local doctors to volunteer at their nearest quarantined hospital.

“I am just as afraid and anxious as any other ordinary citizen,” but “we, 5,700 of Daegu’s doctors, must rise up as warriors on the front lines of the fight against disease,” he wrote.

Asking doctors to come help once they got off work, Lee implored colleagues to help save the city “without expecting a word of praise, or a cent in compensation,” but only with “blood, sweat and tears.”

Lee himself filed for a ten-day leave from a local medical center he runs with a colleague. He is spending that time treating coronavirus patients at Keimyung University Dongsan Hospital.

According to a member of the Daegu Medical Association, Lee plunged himself in volunteer efforts immediately after sending the message to members and cannot be reached.

The association said around 30 doctors were inspired to volunteer with Lee’s message, with many more expected to follow in coming days.
BY KIM MIN-WOOK, KIM JUNG-SEOK [shim.kyuseok@joongang.co.kr]