Bank of Korea throws curveball by holding base rate steady at 1.25%

Bank of Korea throws curveball by holding base rate steady at 1.25% 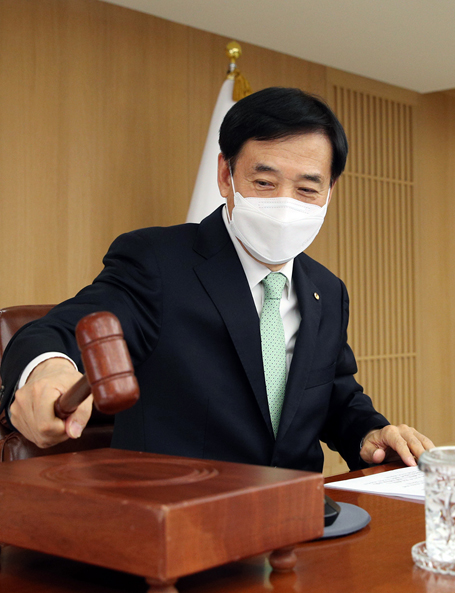 Bank of Korea Gov. Lee Ju-yeol wears a mask at the Monetary Policy Board meeting on Thursday. [YONHAP]

The Bank of Korea is maintaining its base rate at 1.25 percent despite the coronavirus outbreak damaging an already weak economy.

The central bank's Monetary Policy Board was expected to take the policy rate to a record low as the number of infected in the country continues to increase at a rapid pace despite all-out efforts to contain the threat.

Market consensus, according to Reuters, was for a cut to 1.00 percent, with 16 of 26 analysts polled anticipating a quarter point reduction.

Korea now has the highest number of confirmed new coronavirus cases outside of China, with the total hitting 1,595 as of Thursday morning.

That is up 334 from the previous report, which was issued late Wednesday.

The Bank of Korea has maintained the base rate at 1.25 percent since Oct. 2019. It cut the rate by 25 basis points in 2015 during the Middle East respiratory syndrome outbreak, citing worsening consumer sentiment.