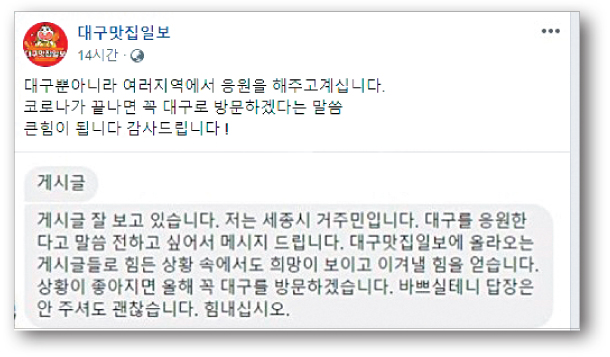 As truth is often said to be the first casualty of war, it seems also to be Patient No. 0 in the coronavirus outbreak.

The vacuum of information about the new and mysterious illness has been filled with unconfirmed information online, spread by people who seem to know more about tech than epidemiology.

To fight back against this other epidemic, government officials, academics and ordinary people have opened social media accounts to gather wisdom, debunk myths and offer up their own solutions for dealing with the crisis.

The Daegu regional government started uploading posts on its official Instagram account @daegucity_official last week. It sought to correct the record and counter what it deemed to be falsehoods.

In a post uploaded Wednesday, officials responded to an article that suggested the Covid-19, or coronavirus, outbreak started with a group of Chinese students who came to Daegu for a field trip in January.

“We remind the public that such information is false. We’ve tested 314 individuals who claim to have been in contact with the Chinese students mentioned in the article, and everyone tested negative,” the post said. 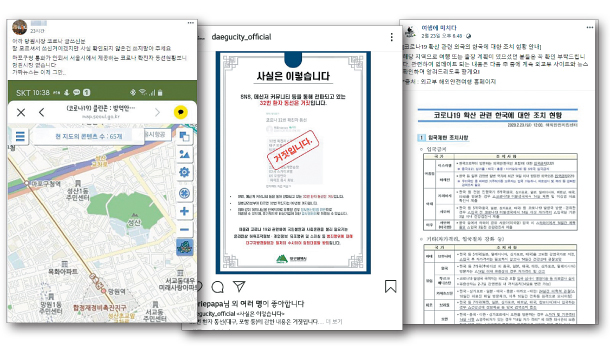 In Seoul, the Seocho District Office actively utilizes its social media accounts. Individuals can get updated information on the paths of confirmed patients and on the virus directly from the Facebook and Instagram accounts of the local government.

Ad hoc debunking mobs have formed. A resident of Daechi-dong and another in Seocho, southern Seoul made their own Facebook pages to set people straight with crowdsourced information about the outbreak.

It’s an “infodemic,” where what should be to a cure turns out to be almost as bad as the disease, as readers get caught in a fog of conflicting information.

Concern about the infodemic goes back to when the Covid-19 epidemic started in Wuhan, China. As information started circulating through Facebook, a social media platform with more than 2.5 billion users worldwide, experts were worried the flood of facts, opinions and rumors might themselves be a threat to public health in China.

Officials from the World Health Organization traveled to Silicon Valley on Feb. 13 urging cooperation from tech companies. Concerns about the information storm include xenophobia.

It turns out that the cause of the infodemic could eventually lead to its cure. Information shared on social media may eventually act as a balance to the questionable facts and outrageous ideas that find their way into the ether.

“It is good to see that government institutions are starting to break away from its one-sided approach to communication and seek out popular media platforms to actively engage with the public,” said Kim Beom-soo, a professor at Yonsei University’s Graduate School of Information. “It’s not only up to the government, but the media and the public should also join efforts to filter out fake news and inaccurate information from spreading online.”

Members of a Facebook page that used to publish restaurant reviews in Daejeon turned into a group of fact-checkers verifying information on the tracks of the infected. The group has 210,000 members.

Some are using social media to gather expertise.

Professor Lee Soon-seok of the Electronics and Telecommunications Research Institute in Daejeon opened the Facebook page titled “ICT TaskForce@Corona19” and gathered together fellow IT professionals to suggest technical solutions to fight the virus. Group members also track and visualize data of infected individuals on the page.

Some ideas have come to fruition. Goyang in Gyeonggi installed a drive-through coronavirus test facility on Wednesday, which was an idea suggested by the group.

Some offer help via Facebook. On a Facebook page of Pohang residents in North Gyeongsang, a social media user posted an ad offering oyster mushrooms for half the market price. It was to help a farm in Pohang that lost all its customers due to the virus outbreak.

Some lifestyle-oriented online communities are actively sharing tips for the epidemic.

On a Facebook page for single-person households, members offered a list of emergency items single households should stock to survive the epidemic - such as rice, instant noodles, canned tuna and bottled water.

Another Facebook group shared travel ban announcements. Members also shared tips on how to fill in quarantine surveys when flying into countries like Russia and Vietnam.