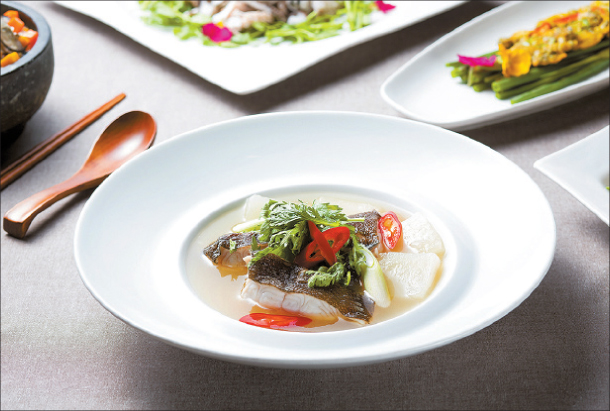 From March 2 to April 30: The Swiss Grand Hotel (formerly Grand Hilton Seoul), located in Seodaemun District, western Seoul, is presenting an “Immunity Promotion” consisting of dishes that improve the body’s immunity as the coronavirus continues to spread.

Buffet Restaurant, the hotel’s signature eatery, has added more than 100 items to its buffet that will help boost immunity. Garlic, mushrooms, pumpkin and spinach, each known as immunity enhancers, will be available during the promotion; other added dishes include carrot porridge, seasonal octopus and various spring herbs.

The new items will include a signature handmade pasta. Il Ponte will continue to make its authentic Italian pizzas - hand tossed and thin-crusted - with more gourmet toppings, such as the Pizza Vesuvio with salami, mozzarella, basil and garlic (25,000 won); Pizza Verde with basil pesto, ricotta, pistachio cream (28,000 won).

There will also be new dessert additions including: Mascarpone Tiramisu with strawberries (18,000 won); Cannolis with sweet ricotta and pistachio(18,000 won) and Amalfi, which includes lemon cake, sherbet and limoncello (18,000 won).

The new menu items pick up on current culinary trends in Italian cuisine from around the world, and are an exciting way for Il Ponte diners to experience unparalleled Italian food in Seoul. 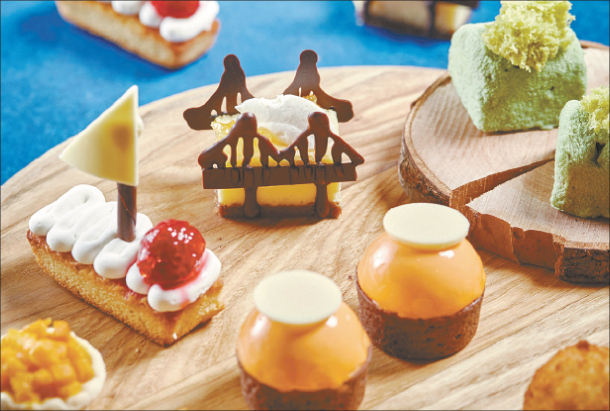 From March 2: The Lounge at Park Hyatt Busan presents “My City Afternoon Tea Set,” which expresses the charm of Busan while giving you the pleasure of sweet desserts that blend the exotic city’s panoramic landscape with nature’s beautiful scenery.

The “My City Afternoon Tea Set” features a variety of desserts that symbolize Busan. It features a simple homemade scone with soft clotted cream or sweet jam, made at the hotel every morning, and a sweet selection of pistachio chocolate bars reminiscent of Igidae Park, colored with the light sweet selection of blueberry panna cotta shaped like a windmill, a beautiful Gwangan Bridge-shaped cheesecake representing beautiful Busan, topped with an orange mousse and white sail-shaped financier. For a savory selection, our crisp fish croquette, bulgogi brioche rolls, and a sweet-honey mustard sandwich with ham and cucumber are popular among men and women alike. Our afternoon tea sets are served with your choice of premium coffee or tea. 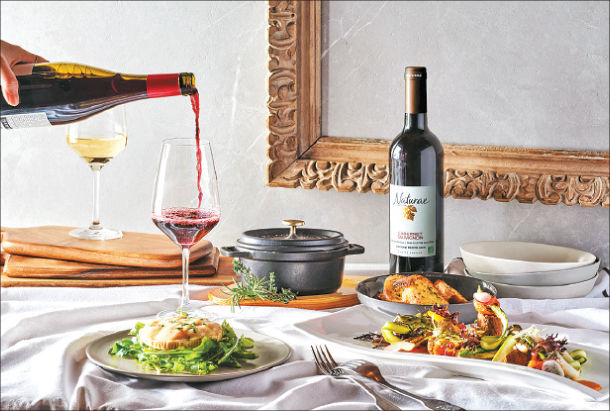 Ongoing: Grand InterContinental Seoul Parnas in Samseong-dong, southern Seoul, introduces vegan wine, one of the eco-friendly wine types that are increasingly gaining attention these days, for the first time in the industry. It was announced that the wine paired with a French-style vegan menu jointly developed by the hotel’s head sommelier and chef will be available at the Lobby Lounge & Bar on the first floor from March onwards.

Being well-known as eco-friendly along with natural wine and organic wine, “Vegan Wine” is made with minimal artificial intervention throughout the whole process, including grape farming, fermentation, aging and brewing. It is completely free from animal ingredients during cultivation and production.

Having organized this promotion, head sommelier Yoo Seung-min said the hotel decided to introduce vegan wine to pursue the eco-friendly consumption trend that excludes artificial elements and to satisfy guests’ demands for new types of wine.

A vegan fare menu will be paired with the vegan wines to enhance the wine’s flavor.

The promotion includes: six types of vegan champagne certified as being vegan in 2017 from Champagne Legret, a winery that has produced champagne for four generations in the Champagne region of France; and two types of vegan wines from eminent winemaker “Gerard Bertrand,” which succeeded in producing wine by a biodynamic farming method with medicinal plants for the first time in southern France.

The vegan wine and vegan menu pairing promotion at the Lobby Lounge & Bar on the first floor will be available from March 1 until the end of June and can be ordered from 11 a.m. onwards.

Through March 31: The Park Hyatt Seoul greets the upcoming spring with a seasonal promotion offering 30 percent off of any suite bookings - the perfect chance for a relaxing getaway in the heart of the city. The discount is complemented by a bottle of red wine and use of the hotel fitness studio, infinity pool and sauna, unlocking a new level of luxury.

Park Suites feature a discrete bedroom and living room, creating a sense of enhanced space and freedom, while interiors crafted from natural materials such as wood and granite conjure a relaxing mood and floor-to-ceiling glass windows usher in abundant natural sunlight by day and inspiring nightscapes after sunset. The package also includes a bottle of red wine handpicked by hotel sommeliers and complimentary use of the infinity pool, sauna and fitness studio, offering a perfect occasion to unwind and relax.

The price for a night in the suites with a discount starts from 441,000 won (including tax and service charge).

Through March 31: Sky Lounge, located on the 30th floor of InterContinental Seoul COEX in Samseong-dong, southern Seoul, presents “Strawberry Afternoon Tea.” Diners can enjoy seasonal strawberries to the fullest in a classy and relaxing atmosphere.

With window seats that provide a view over the Han River, “Strawberry Afternoon Tea” includes pasta prepared by an Italian chef, which presents the distinctive charm of a high-class strawberry buffet.

Priced at 76,000 won for two, it features a more satisfying quality than other strawberry dessert buffets and is accompanied by a drink from among six types of coffee options made with Illy coffee beans, including americano, cappuccino and cafe mocha, or six premium Tavalon Tea varieties blended by tea sommeliers, including chamomile, earl grey and rooibos.