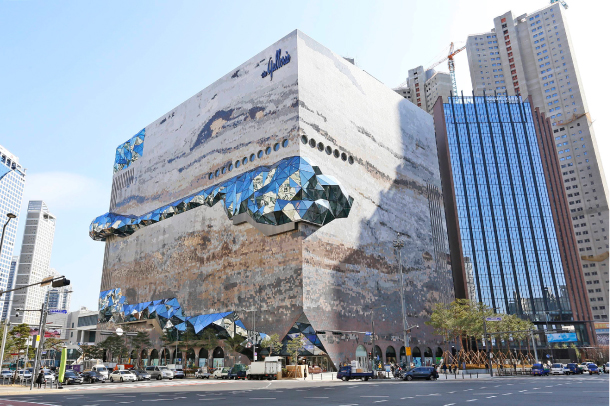 A photo landscape of Hanwha Galleria’s new department store in Gwanggyo, Suwon, which opens today. Consisted of 12 floors, the operation is the biggest among five Galleria stores in Korea with 150,000 square meters of floor space. It also contains studio flats, a hotel and an aquarium that is due open late this year--the first among Galleria stores to do so. The building was designed by OMA, or Office for Metropolitan Architecture led by Dutch architect Rem Koolhaas, the year 2000 winner of the Pritzker Architecture Prize. This is the office’s first commercial building. Galleria Gwanggyo targets luxury brand consumers of the South Gyeonggi region and will hold a total of 440 brands including luxury houses located in the ground and second floors. The operation’s 2020 year revenue goal is 500 billion won, Hanwha said. [HANWHA GALLERIA]