[Sponsored Report] Posco gives back while building a better future

[Sponsored Report] Posco gives back while building a better future 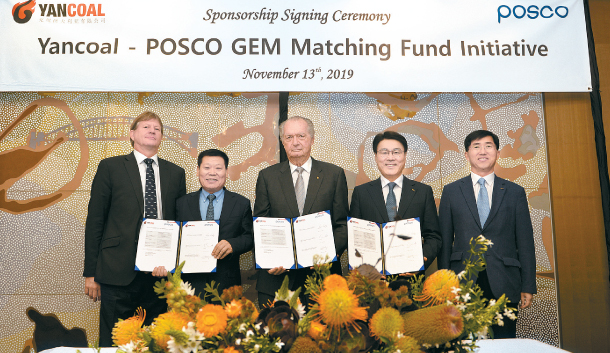 Posco is actively practicing its management philosophy, “Corporate Citizenship: building a better future together” by making a contribution to communities worldwide.

Xcoal, one of the largest coal exporters for steelmaking in the United States, provides approximately one million pieces of coal to Posco. Tree Planet is an environmental company focused on planting trees in order to reduce fine dust.

The GEM matching fund is the first global matching fund made between the steel and mining industries after Posco declared its “Corporate Citizenship” program last July. This fund will be used to improve local communities and create a strong environment for industrial ecosystems.

The matching fund will be a one-on-one matching grant system, and each company will invest $50,000, for a total of $100,000, every year. The money will be used to support local communities in both countries alternatively.

The matching fund between Posco and Yancoal will focus on providing vocational educational programs to indigenous people. Students chosen by the Clontarf Foundation, an aboriginal support foundation, will be provided with training sessions and chance to become a regular staff.

The other matching fund with Xcoal will work on helping communities recover from the forest fires in Okgye, Gangwon, by planting 11,000 trees on about four acres of land.

Posco donated 6 million yuan ($856,000) worth of relief supplies to Wuhan, China, in January. Masks and hand sanitizers were mostly delivered for the sake of virus prevention.

“To practice our management philosophy ‘Corporate Citizenship,’ Posco and our local subsidiaries in China decided to participate in this donation event and will do our best to solve social problems as a global citizen,” said an official from Posco.

“Posco will try its best to help recover from the recent catastrophic forest fires, and I sincerely hope that as one of the close allies and suppliers for our company, Australia will overcome the difficulties soon,” said Choi Jeong-woo, chairman of Posco. The fire started in New South Wales and spread through the whole region, and the Australian government declared a “national emergency.”

Posco Mexico had a groundbreaking ceremony for the Centro de Esperanza Posco Amigos in Mexico this month.

It is a two-story building with a lecture room and a playroom on the first floor and a computer room, a multipurpose rooms and offices on the second floor. The outdoor space will be used as a playground for children.

Posco Mexico’s purpose is to help underprivileged people by providing education that can be helpful for them in the future. It also plans to create a “virtuous cycle” by encouraging them to pass on skills to other people in need. A lack of opportunities for low-income communities in Mexico is a serious problem. This new center hopes to provide a better future.