‘Chairman Hwang was determined to unify the split opposition camp’

‘Chairman Hwang was determined to unify the split opposition camp’ 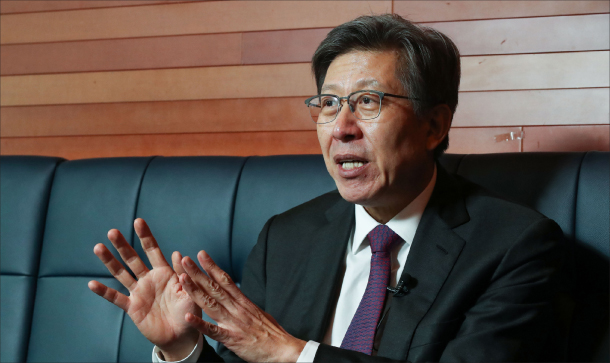 In the face of the looming April 15 general elections, conservative parties have put their three years of internal division aside and banded together to create the United Future Party (UFP).

The UFP became the largest opposition party, taking charge of 113 of the 300 seats in the Parliament.
However, the road to consolidation was not a smooth one.

In the following interview, Park Hyeong-joon — a professor at Dong-A University, former Blue House secretary for political affairs, former lawmaker of the National Assembly and a figure who played a major role in these consolidation efforts — offers behind-the-scenes insight of the events that transpired.

Q. When did the conservative parties first realize the need to consolidate and create a united front?

A. We realized that we needed to do something following the crushing defeat of the Liberty Korea Party (LKP) in the recent regional elections. We were struck by a sense of foreboding then — not only for ourselves, but for democracy in Korea. As a result, last year in August, major conservative politicians met behind closed doors to discuss Korea’s future. At that time, we all generally agreed on the need for unity within the party.

On Sep. 30, Rep. Yoo Seong-min, a conservative lawmaker, and 14 members of the Bareunmirae Party declared an emergency, calling for “change and innovation” throughout the conservative parties. He presented “three principles” as a condition for merging with the LKP, which were that the new party take steps to recover from President Park Geun-hye’s impeachment, that it embrace conservative reform and that it start fresh with a new foundation. This was ultimately the starting point of the push for unification between the conservative parties.

The three principles became a major point of contention. How did you go about solving that?

First of all, from these principles, I knew that Rep. Yoo Seong-min was serious about turning our ideals of a unified conservative party into a reality. When I talked to Rep. Yu Eui-dong, a close associate of Yoo, he said, “As long as the LKP cooperates with us in making these principles work, we won’t demand anything else.” I then passed this message onto Hwang Kyo-ahn, the leader of the LKP. I said to him, “Unless the big player makes a move, there won’t be any progress toward consolidation.” He agreed with me and, on his social media, promised to accept the principles — although admittedly in slightly vague terms.

I have always known Hwang as an individual who is faithful to the cause — that is, of the unification of the conservative parties. Not for one single moment has he betrayed this cause.

However, Yoo has responded that Hwang’s promise was “greatly unsatisfactory.” He emphasized that Hwang must accept these principles, not in any uncertain terms, but ad verbum. When I passed this to Hwang, he said, “If we accept the phrase in the way that Yoo demands it, the LKP will not just sit by idly.” He was referring to a major power within the LKP, the pro-Park faction which responded aggressively to the terms, emphasizing that accepting these terms “was no different from bowing down to Yoo’s will.”

Then, in the middle of this political deadlock, on Nov. 20, Hwang started a hunger strike. I went back and forth between the conservative parties, trying to smooth out the differences. As a result of these under-the-table negotiations, immediately after ending his hunger strike, Hwang declared that he will accommodate the three principles. From my perspective, judging by the wording of his new declaration, Hwang had accepted close to 80 percent of Yoo’s demands. In the end, however, Yoo repeated that this was still unsatisfactory.

Those must have been difficult times for you.

Yes. The general elections were hanging over our heads. We needed to consolidate quickly, but it was difficult to smooth out the differences between the conservative parties. We needed some kind of breakthrough. At this point, I turned to Rep. Choung Byoung-gug, who I knew was enthusiastic for the consolidation of the conservative parties. Together we formed the New Unification Breakthrough Committee in order to jump-start the process of consolidation again.

We faced challenge after challenge. For one, the New Conservative Party headed by Yoo wanted a one-to-one merger with the LKP. However, the LKP wished to add other parties to the merger, including the faction led by Rep. Ahn Cheol-soo. Such disagreements aggravated the existing conflict further.

Choung said to me, “You must become the leader of the New Unification Breakthrough Committee and spearhead the effort to consolidate the parties.” Hwang agreed to this suggestion, and I accepted the post.

But another roadblock occurred. The New Conservative Party did not take well to this. They questioned, “Why would the head of the New Unification Breakthrough Committee be at the helm of the consolidation negotiations?” Yoo felt similarly. I had the feeling that he labeled me as someone who supported the interests of Hwang’s party over the interests of Yoo’s party.

This was all a misunderstanding. I knew that if the new unified conservative party was to emerge as an innovative force, then the roles of the younger and capable politicians would be essential. I believed that the source of such young talent would be the New Conservative Party. This was my conviction. I believed that the New Conservative Party must take center stage in the consolidated party. However, the fact that I was misunderstood as a figure on Hwang’s side caused much difficulty on my end.

What was the turning point?

In many cases, Hwang seems to be indecisive as a leader with a poor sense of timing. What do think?

Hwang rose to his position not because he was a leader we followed of our own will, but a leader we required in this time and age. As a result, he must enforce his will, not through direct authority and commands, but through logical persuasion. The nature of his circumstances obviously put him in a difficult position. It becomes easier to understand his situation if you talk to him directly.

One time, he confided in me, “As soon as I show an inch of budging on Yoo’s demands, aggressive messages flood my phone. Phone calls explode all throughout the night. I am exhausted.” Indeed, when I glimpsed at his phone, there were piles upon piles of texts — literally an explosion of messages.

Will former Gyeonggi Gov. Kim Moon-soo, the Our Republican Party and other major conservative parties be a part of all this?

We will merge with them soon enough. People inherently know that if we want to face President Moon and his party, we must unify and create a united front.

Any hopes of Ahn Cheol-soo joining the consolidated conservative party?

That will be difficult. However, we have to take into account figures normally associated with Ahn’s party that have already joined us. In fact, there are lawmakers from his side who communicated their desire to join our party.