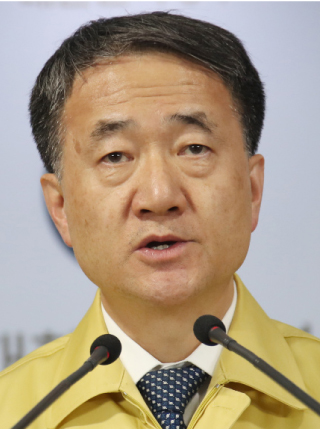 Minister of Health and Welfare Park Neung-hoo is in hot water over a comment he made Wednesday suggesting the main cause of the coronavirus outbreak in Korea was not Chinese people but Koreans who traveled through China.

The remark emerged in a parliamentary hearing Wednesday when Park was questioned by lawmakers of the main opposition United Future Party (UFP) who grilled him on why the government was not imposing an entry ban on foreign visitors from China in spite of a recommendation to do so by the Korean Medical Association (KMA), a private organization of medical experts.

To this, Park said he was only following the recommendations from the Korean Society of Infectious Diseases (KSID), since this organization was made up of epidemiologists and did not endorse an entry ban on Chinese people.

“Those newly infected have [contracted the virus] from domestic elements,” Park said. “After Patient No. 31, there has not been a single patient who was infected by someone coming from China.”

Park’s comment, however, generated controversy because the KSID had, in fact, recommended restrictions on entry for “all people coming from countries at risk [of coronavirus outbreaks]” in a list of suggestions to the government on Feb. 2.

The remark also incited a hail of criticism from lawmakers of the UFP, which has fixated on the government’s reluctance to impose an entry ban on visitors from China as a centerpiece of its crusade against the Moon Jae-in administration.

Shim further claimed, without evidence, that Moon was offering up the country as sacrifice to China in order to receive a visit by Chinese President Xi Jinping.

UFP lawmakers also presented statistics from the Incheon International Airport Corporation that showed a total of 140,255 people had entered Korea from China from Feb. 1 to 23. While visitors from Wuhan, the original epicenter of the outbreak in China’s Hubei Province, have been barred from entry since Feb. 2, the data showed hundreds of people were still entering Korea from Chinese cities like Zhengzhou, Guangzhou or Changsha, all of which have reported outbreaks.

Yet in contrast with their zealous criticism against the government’s policy toward China, the UFP has been notably soft when referring to the controversial Shincheonji Church of Jesus, which by Thursday’s report from health authorities has been linked to almost half - 45.8 percent - of all coronavirus cases in Korea.

On Thursday, UFP Rep. Khang Hyo-shang claimed Moon was deliberately focusing the government’s virus response on the Shincheonji church and infringing upon its religious freedoms. Khang also went on to accuse the ruling Democratic Party of linking the church with the UFP in order to shed responsibility for the current health crisis in the country.

UFP Chairman Hwang Kyo-ahn on Monday also appeared to defend the religious sect, which has been accused of undermining the government’s quarantine efforts with its secretive behavior, by saying it was wrong to place blame on a “certain religious group.”

Alarmed by public criticism generated by such comments, the UFP announced Thursday it would take firm legal action against any attempts on social media to connect the party to the Shincheonji church through “fake news.”