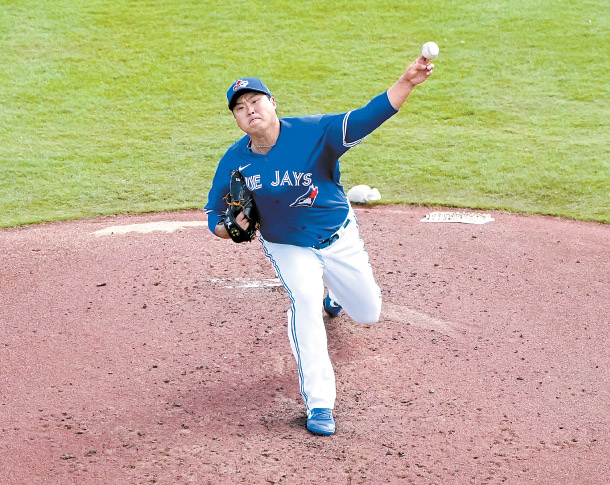 Ryu Hyun-jin of the Toronto Blue Jays throws a pitch during a spring training game against the Minnesota Twins at TD Ballpark in Dunedin, Florida, on Thursday. [YONHAP]

Ryu Hyun-jin served up a towering home run but pitched out of an early jam in his much-anticipated spring training debut for the Toronto Blue Jays.

The Korean left-hander gave up a run on three hits in two innings against the Minnesota Twins at TD Ballpark in Dunedin, Florida, on Thursday, leaving the game with his team trailing 1-0. Ryu struck out two batters, and threw 26 of his 41 pitches for strikes.

This was Ryu’s first spring training appearance as a Blue Jay. Manager Charlie Montoyo said earlier this week that he’d get Ryu to make 40 to 45 pitches in two frames. The mission was accomplished, though the outing had its share of adventures.

After leading all of baseball with a 2.32 ERA and finishing second in the National League Cy Young Award voting for the Los Angeles Dodgers, Ryu signed a four-year, $80 million deal with Toronto. As the highest-paid pitcher in franchise history, Ryu has already been pegged as the Opening Day starter, barring injury. The main objective for the often-injured 32-year-old is to finish his first camp with the new club healthy.

Ryu pitched himself into trouble against a Twins lineup of mostly minor leaguers who came out swinging. Jake Cave led off the game with a double on Ryu’s second pitch. Then Trevor Larnach battled Ryu to a full count before lining a single up the middle to put runners at the corners.

Ryu got a ground ball to third base off the bat of Willians Astudillo, and Cave was tagged out in a rundown. But Cave bought enough time for Larnach to move to third and Astudillo to reach second.

Ryu went to a 3-2 count against Brent Rooker, who fouled off two pitches before going down swinging on a changeup. Ryu completed his escape job by getting Royce Lewis, the No. 1 overall pick at the 2017 draft, to ground out to third base.

Ryu needed 24 pitches to get out of his jam unscathed.

Travis Blankenhorn grounded out to second to begin the second inning against Ryu. The lefty went up 0-1 on Zander Wiel, who then jumped on an elevated fastball and drove it over the batter’s eye in center for a home run.

Ryu regrouped to strike out Gilberto Celestino on a 3-2 changeup. Jack Reinheimer then hit a pop fly to shortstop Bo Bichette, as Ryu wrapped up his up-and-down start.

Ryu worked ahead of all nine batters he faced and mixed up a handful of different pitches in his arsenal. There were no velocity readings available at the renovated TD Ballpark.

The game ended in a 3-3 tie, as the two teams opted not to play extra innings after the Blue Jays scored two runs in the bottom of the ninth.

After Wiel’s homer off Ryu in the top second, the Twins got another solo shot courtesy of Cave in the top third. The Jays cut the deficit in half thanks to a solo home run of their own from Reese McGuire in the bottom third. Matt Wallner’s RBI single in the top ninth put the Twins ahead 3-1.

McGuire’s homer remained Toronto’s only hit until the bottom ninth. The Blue Jays rallied with two singles and a walk that loaded the bases for Kevin Smith, who lined a single to right field that scored two runs and knotted the score at 3-3.

“I went in trying to throw about 45 pitches across two innings, and I ran the pitch count a bit high in the first inning,” Ryu told Korean reporters after making 24 pitches in the opening frame. “Since it was my first start, my focus was on the pitch count and the number of innings.”

Ryu said both the double and the home run came against his two-seam fastball and added, “Other than those two, I think I pitched well.”

The Blue Jays will next play the Detroit Tigers on Friday in Lakeland, Florida.