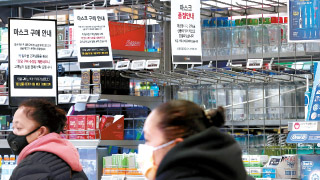 A sign hung up on an empty shelf at a discount store in Seoul notifies customers that face masks have been sold out. [YONHAP]

The Ministry of Foreign Affairs has sent about 6 billion won ($4.9 million) worth of medical supplies to China since early February, according to a report from the Foreign Affairs Ministry provided to a lawmaker from the main opposition United Future Party (UFP) on Friday.

The report comes amid the party’s criticism of President Moon Jae-in’s administration for continuing to provide medical supplies to China. The rapid escalation of the coronavirus outbreak in Korea has caused demand for masks and other supplies to skyrocket, particularly in Daegu and North Gyeongsang, where the bulk of confirmed cases have been reported.

Health officials are now on red alert to secure medical supplies in Korea, after the tally of coronavirus patients exceeded the 2,000 mark on Friday.

Choung Byoun-gug, the lawmaker who requested the report, criticized the government on Friday, noting the administration has said it will continue to deliver medical supplies to China in line with its January pledge to support the country with $5 million worth of emergency supplies.

“I have doubts whether the government is making the right decision at a time when local health officials in Daegu and North Gyeongsang are struggling to secure medical supplies. On the contrary, Shanghai has sent us 500,000 face masks” said Choung in an interview with the JoongAng Ilbo. He noted that shipments to China continued on Thursday, when Korea’s daily tally of confirmed cases passed 500 for the first time.

According to the report, 15,000 sheets of latex gloves were sent Thursday to China’s Liaoning and Jilin provinces. Six billion won worth of medical supplies, including face masks, disinfection suits and goggles, were sent to other regions in China.

It was the first time such details, including the list of items and the dates of delivery, were publicly disclosed.

On Feb. 4, 30,000 face masks, disinfection suits, goggles and latex gloves were sent to Chongqing, west of Hubei Province, according to the report. As of Friday, that area in China had a total of 576 confirmed patients and 6 deaths from the coronavirus. On Feb. 17, the government sent 20,000 latex gloves and 400 hand sanitizer spray dispensers to different regions in China affected with the coronavirus. This includes Hebei, Tianjin and the autonomous region of Xinjiang Uygur. Hebei has reported 318 confirmed cases and 6 deaths, and Tianjin confirmed a total of 136 patients and 3 deaths.

Between Feb. 14 and 17, the government sent 50,000 latex gloves, 600 hand sanitizer spray dispensers, five generators, four boxes of water purification tablets and 2,000 blankets to Anhui, Zhejiang, Jiangsu and Shanghai regions of China. Anhui has the sixth-largest number of patients infected with the virus, with 989 cases and 6 deaths.

The number of items sent to Wuhan and Hubei - the two regions with the largest number of confirmed patients - were not included in the report.

Disposable medical supplies, such as latex gloves and disinfection suits, are also falling short. Min Bok-ki, who heads the disaster headquarters for the coronavirus in Daegu, said in a Thursday radio interview with CBS that some medics in Daegu are treating patients without wearing disinfection suits due to the shortage.

“We have no other choice. You will understand what I mean once you [come to Daegu] and see the situation for yourself,” Min said.

Choung laid the blame for the shortage on the government.

“The government has been supporting China with medical supplies when Korean health officials are struggling to secure them to treat more than 2,000 confirmed patients across the country,” said Choung.